5 ways you can optimize your diet today, based on your genes 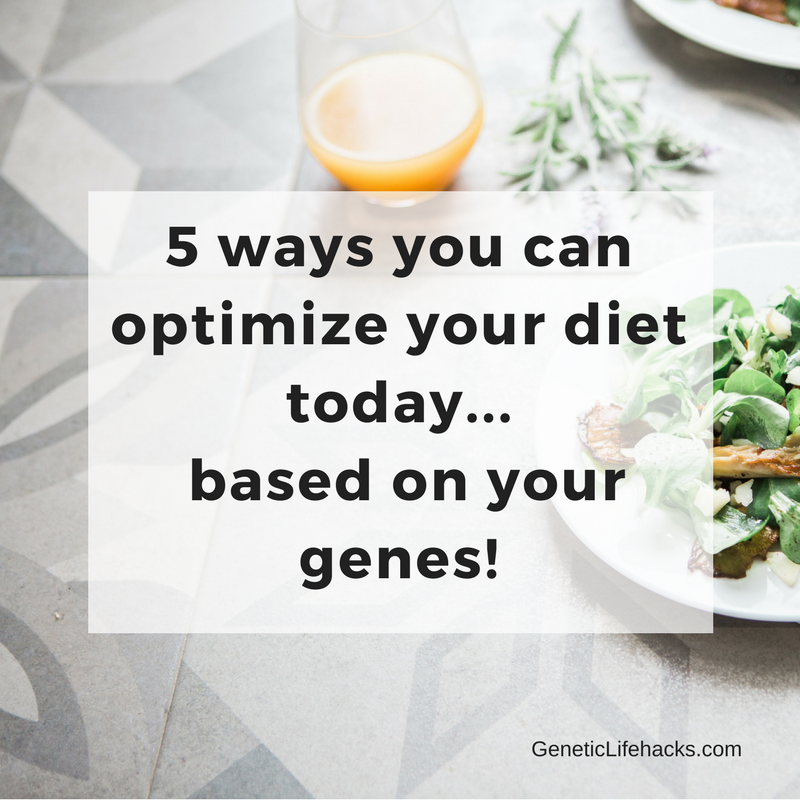 With all the dietary advice out there today, how can you know what is right for your body?

I’ve boiled down 5 quick ways that you can use your genetic data (23andMe, AncestryDNA, etc) to optimize your diet to fit your genes.

#1) Are you genetically lactose intolerant?

Lactase is the enzyme that breaks down the sugar, lactose, that is found in milk products.

#2) Are fruits and vegetables giving you enough vitamin A?

Lifehacks: If you have a “T” in both of the SNP’s above, your beta-carotene conversion is almost 70% less than normal.  A “T” in just one SNP from above decreases your conversion by about 32%.[study] Eating liver is a great way to get the retinol form of vitamin A that your body needs.  Can’t stomach liver? A vitamin A supplement that includes retinol palmitate may work for you.
You don’t want to go too far overboard with supplementing with vitamin A since it does get stored by the body.  Read more about vitamin A and your genes.

#3) Is saturated fat increasing your risk of high blood pressure?

Read more about the interaction between high-fat diet, blood pressure, and your genes.

#4) Will drinking coffee in the morning decrease your risk of heart attack?

Coffee is the number one source of antioxidants in the US diet.  Our ability to metabolize the caffeine in coffee varies quite a bit according to our genes.  About half of Caucasian populations are fast metabolizers of coffee, with the other half being slower metabolizers.
Studies have linked coffee consumption to an increased or decreased risk of heart attacks — depending on your caffeine metabolism genes.[study]

Lifehacks: Common sense dictates if you have a family history of heart disease and slow caffeine metabolism genes, you should consider keeping your coffee consumption at 2 or fewer cups of coffee on an average daily basis.  Alternatively, if you are a fast metabolizer of caffeine you can reduce the risk of heart attack with 3 cups of coffee a day.  The study also showed that for those younger than age 59 who were fast metabolizers of caffeine, drinking 4+ cups a day also decreased the risk of heart attack.

Looking for a way to pep up your morning coffee?  Here are a couple of options:

A study came out recently showing that both low carb and low-fat diets were equally effective for weight loss. There are other studies showing differences in dieting results of low carb or low fat that depend in part on genetic variants. Looking at your genes may give you an idea of which diet would work best for you.

Amylase is the enzyme that digests of carbs, starting in your mouth.  A genetic variant in the amylase gene (AMY1-AMY2) predicts whether you are likely to produce a lot of the enzyme or less of the enzyme to break down carbs.

Your genes also play a role in how carbohydrates are likely to affect your blood glucose levels.

Lifehacks: If you are a lower amylase producer but want to try a higher carb / lower fat diet, you can supplement with the amylase enzyme. I recommend actually testing your blood glucose levels to see how you react to different foods/meals.  Blood glucose testing kits are not all that expensive and will give you a way to quantify and keep track of your response.

I hope you have found something here that is useful. Personally, I’m often frustrated by the one-size-fits-all approach that so many health and wellness websites proclaim. While I didn’t have huge health problems, the little diet adjustments based on my genes have made a noticeable difference for me. For example, figuring out that I don’t convert beta-carotene to vitamin A lead me to try a supplement of the retinol form of vitamin A.  A month later I noticed that I didn’t have the little bumps (keratosis pilaris) on the back of my arms that had been there since childhood. (And yes, I did test it out to make sure it was the vitamin A by stopping the supplement for a month, at which point the bumps came back.)  While getting rid of bumpy skin isn’t earthshattering, all the little tweaks to my diet and lifestyle based on what I’ve learned from my genes have added up to me being healthier and mentally sharper.