PPARG: A genetic variant that can protect against obesity and type-2 diabetes, but only if you eat the right diet. 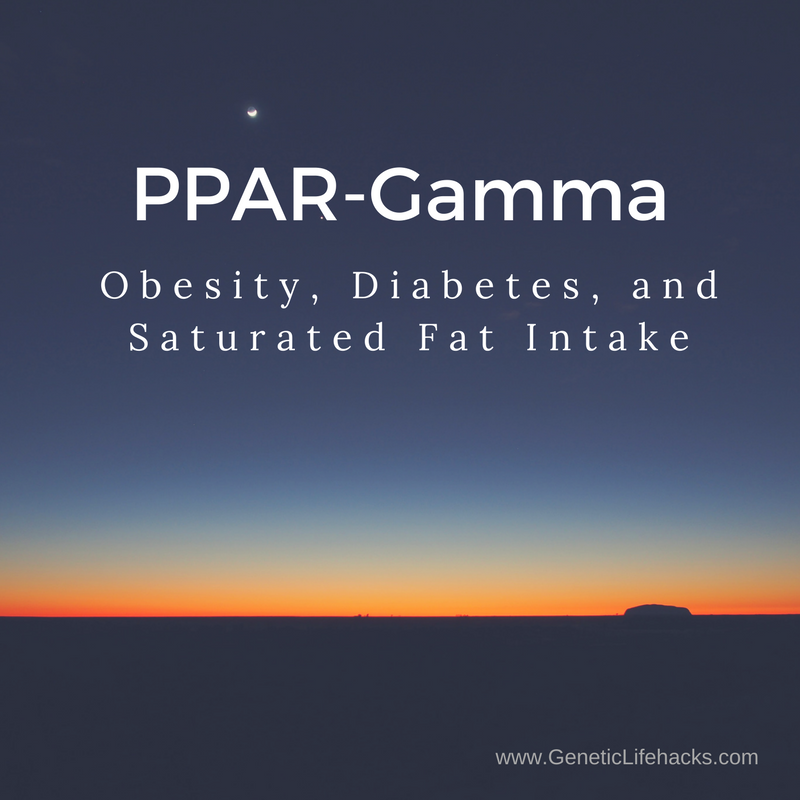 The PPARG (peroxisome proliferator-activated receptor-gamma) gene has been associated with obesity, metabolic syndrome, and risk for type-2 diabetes. This gene is involved in the regulation of fatty acid storage and in glucose metabolism.

PPAR-gamma is activated by omega-6 polyunsaturated fatty acids and regulates adipocyte differentiation. More specifically, PPARG is a nuclear transcription factor that involved in our natural circadian rhythm, regulating genes involved in storing fat and insulin sensitivity over a 24-hour cycle.[ref]

PPARG could be thought of as a gateway that activates a fat cell to store more fatty acids. It is activated by omega-6 fats, causing fat cells to take fatty acids out of circulation and store them. This then causes cells in the body to take up glucose (mainly from carbohydrates) and use it for energy. This is the way our metabolism normally works- if glucose is available it is used first for energy with fat being stored to be used later when glucose isn’t available.

One type of diabetes drug, thiazolidinediones or TZD’s, works by binding to PPARG, causing the fat cells to take up all available fatty acids and subsequently making the rest of the cells in the body take in more glucose for energy. This does cause blood glucose levels to decrease, but a very common side effect is weight gain.

The most commonly studied variant, rs1801282 or Pro12Ala, is thought to decrease PPARG activity, protecting against weight gain for some.[ref]  But it is conversely associated with obesity in certain populations, probably based on fat intake and type of fat that is common in their diet. A study found that those carrying the G allele were more likely to be obese with a diet higher in saturated fat, while those with the G allele were not at a higher risk for obesity if their fat intake was based more on polyunsaturated fats.[ref] This makes sense when you think about it. In those with the PPARG variant, the body isn’t getting the normal signal from polyunsaturated fatty acids that should make the fat cells fatter.

Diet: For those with the PPARG rs1801282 variant, sticking to a diet lower in saturated fat should be protective against weight gain.  (This may be more important in those eating a normal diet with a mixture of fats, carbs, and protein, rather than for someone on a ketogenic diet.)

Cinnamon: A component of cinnamon, cinnamaldehyde, activates PPARG.[ref] This may be how it helps to lower blood glucose levels (but in a slightly different way than thiazolidinediones, T2D medication).

For the rest of the population without the PPARG variant (C/C for rs1801282), decreasing PPARG levels a little may help with weight loss while on a lower omega-6 fat diet. [ref]