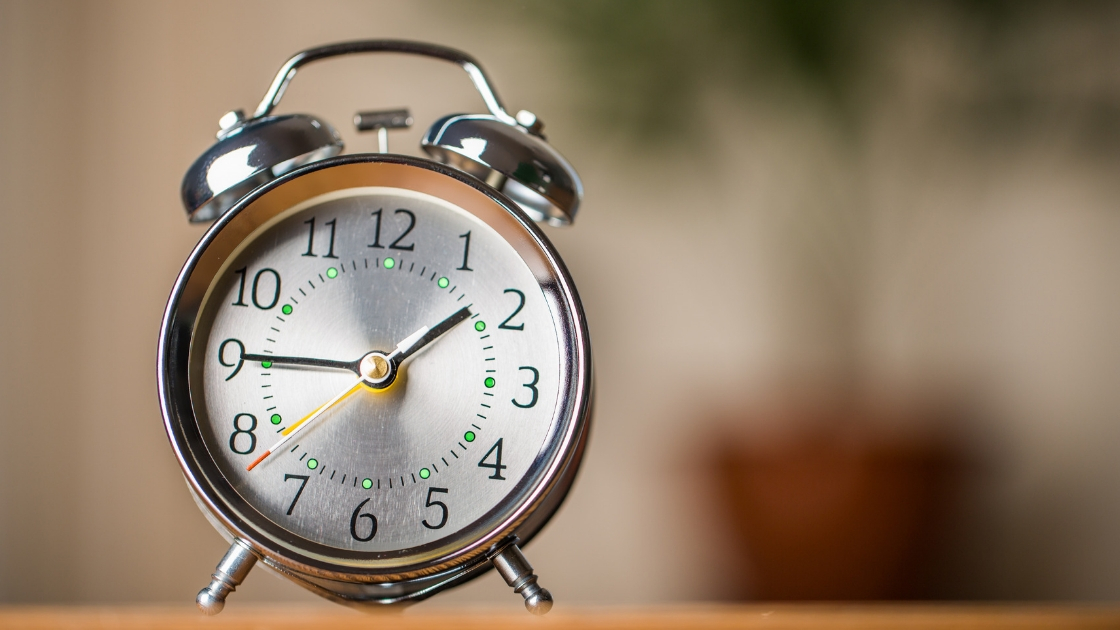 Circadian rhythms are the natural biological rhythms that shape our biology.  Most people know about the master clock in our brain that keeps us on a wake-sleep cycle over 24 hours.  This is driven by our master ‘clock’ genes.

It turns out that we also have circadian cycles (peripheral clocks) in most organs such as the liver, pancreas, and fat cells. These peripheral rhythms drive the cyclical production of proteins in our organs. One example of the importance of these peripheral clocks includes research on the timing of chemotherapy drugs based on the circadian rhythm of enzymes produced in the liver.[ref]

Getting a little Geeky…

You want to be familiar with some pretty cool terminology involved in chronobiology (a nifty term for the study of biological rhythms) before digging into the research papers on the topic. The part of the hypothalamus controlling the central clock is the “suprachiasmatic nucleus” (SCN), which sounds a little sci-fi to me.  And the external environmental inputs, like the time the sun rises or lights at night, are known as zeitgebers.  Some things are named more predictably, like one gene controlling circadian rhythms is called the CLOCK gene ( an acronym for Circadian Locomotor Output Cycles Kaput). 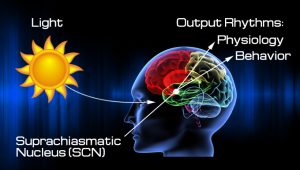 It is probably not a big surprise that our core circadian rhythm is set by sunlight since night/day rhythms can be seen in all animals.  In a nutshell, light from the sun in the short, blue wavelengths hits receptors in the eye (intrinsic photosensitive retinal ganglion cells) which signals to the suprachiasmatic nucleus synchronizing the circadian 24-hour cycle.

There are two factors that can mess up our circadian rhythms: light at night (specifically, blue wavelengths ~450-480nm) and lack of sunlight in the morning.  Add to that the individual genetic variants that affect our clock gene functions and you can begin to see the importance of this topic.

So what happens when our circadian rhythms go askew?  The effects can be far-ranging and include increased risk for the following: diabetes, cardiovascular disease, certain cancers, mood disorders, and obesity.  The amount of scientific research coming out on the topic in the past few years is astounding.  While not talked about much in the mainstream press, the strong evidence led the IARC (the cancer research arm of the World Health Organization) in 2007 to list chronic exposure to light at night as a possible carcinogen.

Members: See your data below Log in and select your data file

Not a member? Join now. 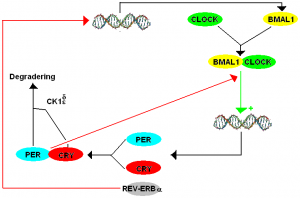 The CLOCK and BMAL1 (ARNTL) genes are the core clock genes that target and turn on other genes. They are regulated and turned off by rising levels of the cryptochromes, CRY1 and CRY2,  and the period genes, PER1, PER2, and PER3.[ref] This forms the daily feedback loop of rising CLOCK and BMAL1 that are then inhibited by rising levels of CRY and PER giving a 24-hour rhythm.

One well-studied variant of CLOCK with quite a variety of effects is rs1801260 (G is the minor allele for 23andMe orientation, also known as 3111T/C )

Another CLOCK gene variant, rs11932595 (G is the minor allele), has been shown to affect circadian function:

BMAL1 binds with CLOCK to increase the production of the PER and CRY circadian genes.  One of the BMAL1 variants, rs3816358 (A is the minor allele), has been studied in reference to breast cancer risk, cardiovascular disease risk, and diabetes risk.

PER1 codes for the ‘period circadian protein homolog 1’ protein which, along with CRY (below), is the other half of the core genes involved in our circadian rhythm.

A study in 2012 found that a variant, rs7221412, altered the natural timing of activity. Those with the A/A genotype may naturally wake up about an hour earlier than those with G/G, while A/G falls in the middle.

FTO is a gene with variants that are associated with an increased risk of obesity (nicknamed the fatso gene).  A 2015 study found that FTO deficient mice had robust circadian locomotor activity rhythms, while “Overexpression of FTO represses the transcriptional activation by CLOCK and BMAL1.”[ref]  Other studies have shown that over-expression of FTO leads to increased body fat.[ref]

Blocking Blue Light:
Blue light at night has a big effect on your circadian rhythms. (Read my melatonin article).  Blocking blue light in the evening for a few hours before bed with blue-blocking glasses is one solution that will have multiple positive benefits on sleep and circadian rhythm. Get some inexpensive orange safety goggles and wear them every evening. Or upgrade to some nicer looking blue-blocking glasses. This seriously makes a difference in sleep quality and circadian function.

Sleep in the dark:
Even dim light at night can affect the body.  A study found that after two weeks with dim light during their dark cycle, “mice gained significantly more mass, reduced whole-body energy expenditure, increased carbohydrate over fat oxidation, and altered temperature circadian rhythms.”[ref]  So get some light-blocking curtains, put electrical tape on any LED charger lights, and sleep in true darkness.

Colors shift on iOS:
You can turn on an accessibility feature on iPhones to set up the phone to do a complete shift to red light. This is a handy feature if you need to look at your phone for some reason during the night.  Turning on a color shift to red on iOS phones.

When and What to Eat:

Time your meals right:
When you eat may matter more than what you eat:  “we recently showed the timing of the main meal predictive of weight loss during a 20-week dietary intervention and that this effect was independent of total 24-h caloric intake. The importance of caloric distribution across the day on weight loss therapy was supported by a recent 12-week experimental study showing that subjects assigned to high caloric intake during breakfast lost significantly more weight than those assigned to high caloric intake during the dinner.”[ref]  Another study showed that for bariatric surgery patients, those who ate their main meal later in the day were much more likely to be poor responders and lose less weight.[ref]

For those with melatonin receptor variants, eating dinner earlier can significantly decrease the risk of type 2 diabetes!

Intermittent fasting or restricted feeding time would also be something to explore.  Mouse studies on restricting feeding timed to a four-hour window resulted in less weight gain, even though equal calories were eaten.  Possibly more importantly — it reset some of the circadian rhythm markers in those mice.[ref]

Ketogenic Diet alters circadian system:
A mouse study looked at the effects of a ketogenic diet on clock genes.  It found that: “Clock genes showed delayed rhythms under KD. In the brain of KD-fed mice, amplitudes of clock genes were down-regulated, whereas 6-fold up-regulation was found in the liver. The metabolic state under KD indicates reduced satiety in the brain and reduced anabolism alongside increased gluconeogenesis in the liver.”  The study also found that the ketogenic diet “led to 1.5-fold increased levels of blood glucose and insulin.”[ref] There are other studies as well on the circadian rhythm changes induced by a ketogenic diet.[ref]

NAC:
N-acetyl-cysteine (NAC) reversed the effects of BMAL1 deficiency in mice in regards to aging and oxidative stress.  Additionally, “Bmal1-deficient mice that received NA/C weigh less than the corresponding control animals drinking regular water”, but they also drank less water.[ref] This may be something to look into more as far as the timing of when it is best to take NA/C.

Final thoughts:
There is an incredible amount of research coming out about the impacts of disruptions to our circadian rhythms, which has convinced me that this is one of the most important bases for good health.  Significant increases in the risk for breast and prostate cancer have shown ties to exposure to light at night, as well as increased risk of metabolic syndrome and diabetes.

Personal update: While I’m not ready to go back to using candles for illumination in the evening, I am rocking the orange glasses every evening and sleeping like a rock each night.  Plus I’ve moved my evening meal earlier (5:30  or 6 pm) and cut out snacking at night to give my body the signal that the day is done.  All of this has resulted in weight loss without cutting out calories or changing my regular way of eating.

Circadian Rhythm and Mood Disorders
Most people intuitively understand that plants respond to sunlight, using photosynthesis to produce energy and store sugar during daylight. It is easy to also apply the thought of daily rhythms to animals, with nocturnal mice scurrying around at night and diurnal birds chirping in the morning. What is often not considered is how deeply circadian rhythms are hardwired into us, humans.

Circadian Rhythm and Weight Loss
There are five key elements to weight loss from a circadian point of view: Timing of Meals; Light Exposure; Sleep; What to Eat and When; and Genetic Variants. All of these can come together in our modern world to give you a propensity to gain weight – and all can be hacked to help you lose weight.