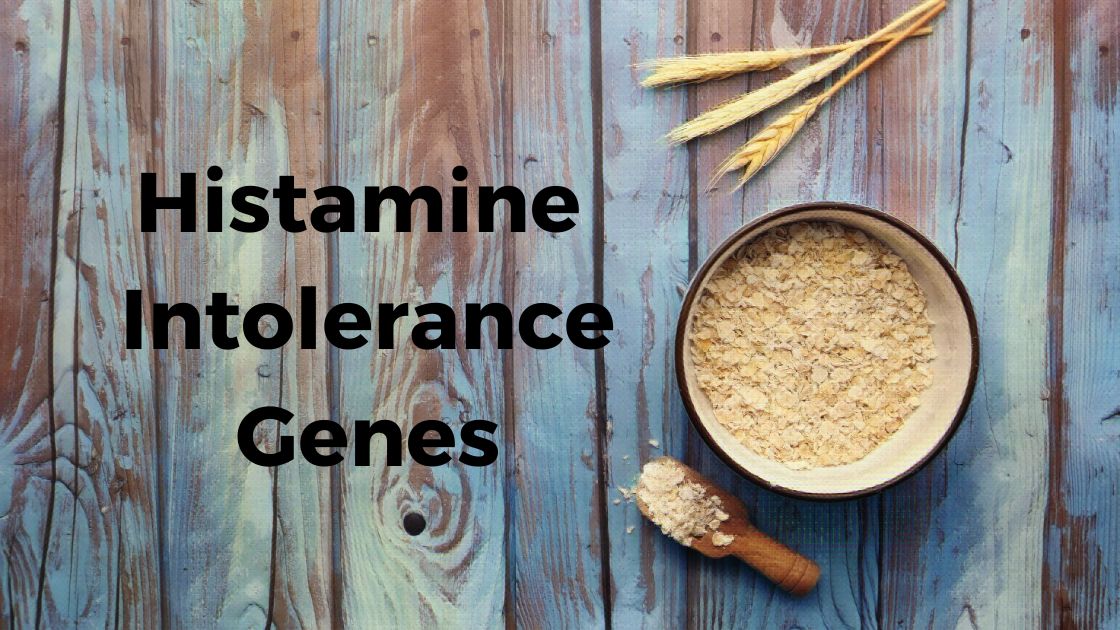 Do you deal with sinus drainage after you eat? Periodic itching and hives? Migraines, irritability, anxiety, brain fog? The weird and seemingly unrelated symptoms of histamine intolerance can drive you nuts trying to figure out the root cause.

How well your body breaks down histamine is partly determined by genetics:

This article goes in-depth on the research into histamine intolerance. I’ll include the genetic variants that impact histamine levels, and then go through solutions and options at the end of the article. Everything is fully referenced, so you can easily dig into the research yourself. This is one article that you may want to bookmark and come back to read again.

What is Histamine Intolerance?

Classified as a biogenic amine, histamine is a molecule that plays many roles in the body. Histamine’s many functions include:

While most of us think of histamine only during allergy season, histamine is a vital part of how your body works.

What are the symptoms of histamine intolerance?

Historical note: Too much histamine has been known for decades to cause scombroid poisoning – the type of food poisoning from eating fish that isn’t fresh.[ref]

Here’s a visual overview of what we are going to cover here: 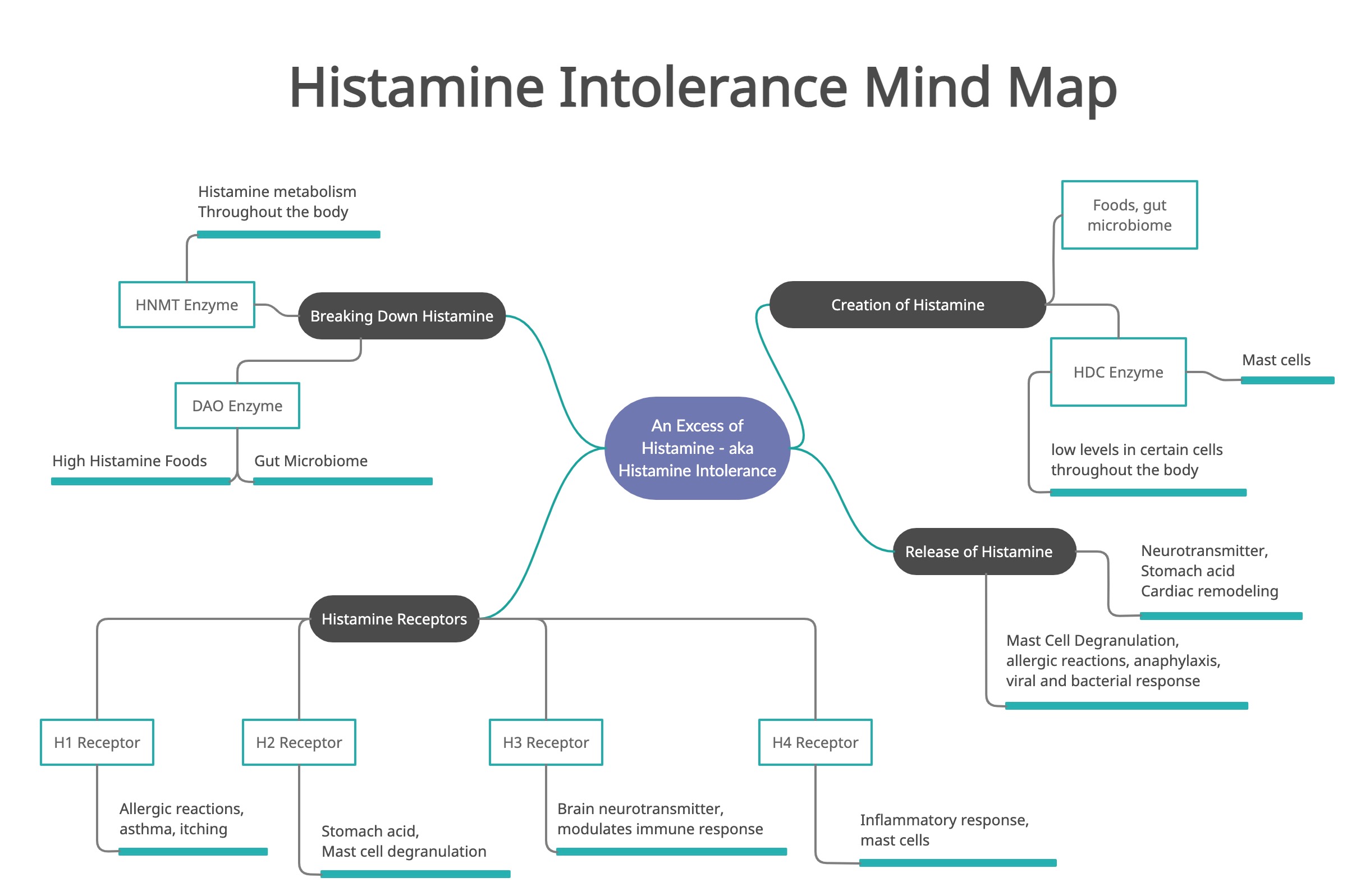 The two leading causes of histamine intolerance are:

There are two ways your body clears histamine: the DAO enzyme or the HMNT enzyme.[ref]

Diamine oxidase is encoded by that AOC1 gene. It is mainly produced in the intestines to counteract histamine from foods and histamine created by intestinal bacteria. Foods containing a lot of histamines include aged cheeses, aged meats, fermented foods, and more.

Certain bacteria in the gut (including those from some probiotics or fermented foods) can also increase histamine levels in the body. People with histamine intolerance show altered gut microbiome composition as well as elevated levels of zonulin, which regulates tight junctions in the intestines (leaky gut).[ref] A recent study of histamine intolerance patience found that they had “a significantly higher abundance of histamine-secreting bacteria…”[ref]

The HMNT enzyme breaks down histamine in the central nervous system.

Recent studies show exactly how important HNMT is in controlling brain histamine levels. Genetic variants that change HNMT levels in the brain are linked to an increased risk of neurodegenerative disorders such as Parkinson’s disease. Studies also link HNMT variants to an increased risk of migraines and ADHD.[ref] Rare mutations that inactivate the HNMT enzyme are linked to intellectual disability.[ref]

The HNMT enzyme acts throughout the body. Genetically decreased HNMT is also linked to atopic dermatitis or eczema.[ref] While DAO can also circulate in the periphery, HNMT is the only enzyme breaking down histamine as a neurotransmitter in the central nervous system.

Histamine is made from the amino acid histidine. It is an essential amino acid, meaning humans cannot make it in our bodies and must obtain it from diet. Histidine can be used in the body for several different purposes, including histamine production.

Histidine decarboxylase (HDC gene) is an enzyme that catalyzes the reaction of histidine into histamine. It does this inside various cell types, including creating histamine in large amounts in mast cells.

Genetic studies show that people with Tourette’s (vocal and motor tics) may have rare HDC gene mutations as a cause. The loss of histamine in the basal ganglia causes too much dopamine in that region of the brain, resulting in tics.[ref]

Additionally, clinical trials show that blocking the H2 receptor is beneficial for chronic heart failure. Famotidine (Pepcid AC) improved cardiac symptoms and ventricular remodeling. In the heart, histamine increases the force of contraction, and even as far back as 1913, histamine has been known to induce heart arrhythmias.[ref][ref]

How can histamine cause headaches and heartburn and hives?

The function of histamine in a specific part of the body depends on the receptor it binds to.

Different histamine receptors are found in different parts of the body:[ref]

Three types of histamine receptors are found in the intestines: H1, H2, and H4. Interestingly, a study showed that people with food allergies and IBS had significantly higher levels of H1 and H2 receptors in their intestines.[ref] 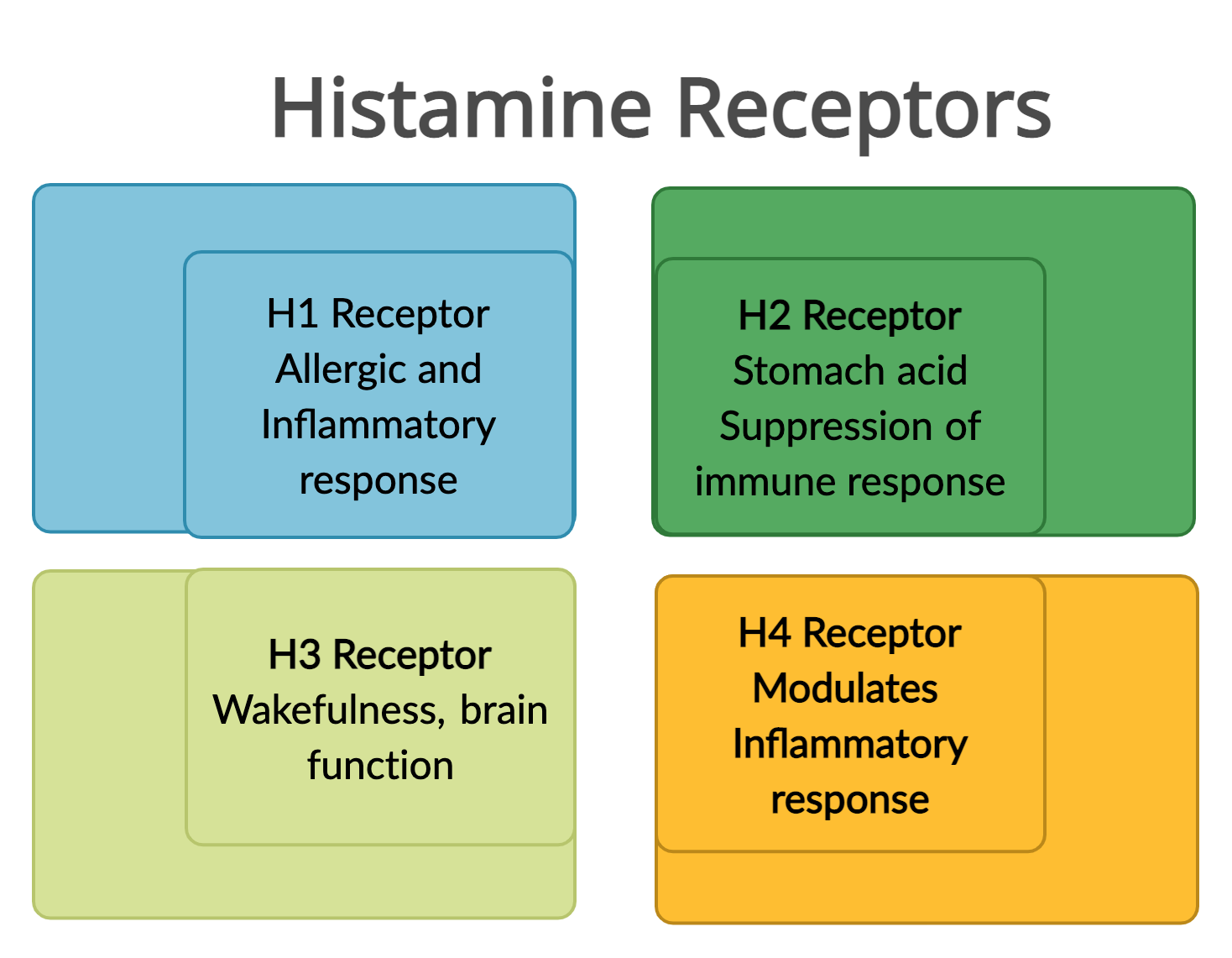 Mast cells are a type of immune cell that stores histamine. They are found in most tissues in the body, especially in areas of the body exposed to the outside world.

For more in-depth info on mast cells and histamine, check out Research Studies on Mast Cells and Histamine Intolerance, where I dive into all the different ways histamine can affect you.

Shameless Plug: Want to go further with your genetic raw data? Join as a Member!

Benadryl, a commonly used antihistamine, has the side effect of making people sleepy. It is due to the actions of histamine in the brain.

Members: Log in to see your data below.
Not a member? Join here.
Membership lets you see your data right in each article and also gives you access to the members’ only information in the Lifehacks sections.

Note that rare mutations influencing DAO production are not included in most genetic data, so the information below may not give you the complete picture.[ref][ref]

The methylation cycle plays a role in breaking down monoamine neurotransmitters, including histamine. It is also important in creating the methyl groups needed for the HMNT enzyme to work. So looking at your methylation cycle genes can also help with balancing out histamine intolerance.

The MTHFR gene codes for an enzyme that is a key player in the folate cycle. It is one source of methyl groups for the methylation cycle. Decreased enzyme activity of MTHFR – combined with a diet lacking in folate or choline – may cause a reduced breakdown of histamine.

HDC gene: encodes the histidine decarboxylase enzyme, which is used in the conversion of histidine into histamine

HRH2 gene: histamine receptor 2 is active in the production of stomach acid, the sinus node of the heart, and other places in the body

The DAO enzyme also breaks down tyramine, another biogenic amine. Many of the same foods high in histamine are also high in tyramine.

People who are on MAOIs, a type of antidepressant, are at a higher risk of having problems with breaking down tyramine.

Tyramine is metabolized through three different pathways in the body: MAOA, CYP2D6, and FMO3. Members will see their genotypes below.

If you have variants in all three pathways, please read the full article on tyramine intolerance. This may exacerbate problems with histamine via using the same DAO enzyme.

Below are the research-backed solutions for histamine intolerance. You may need to try several different ‘lifehacks’ to see which works best for you.

A Low-histamine diet, at least initially:

If you are considering a low histamine diet, I find this histamine food list to be the most thorough: Complete list of foods that are high in histamine (pdf).

Note that alcohol can cause mast cells to release histamine. For some, this may cause flushing when drinking. But for people with histamine intolerance, even alcoholic drinks that are lower in histamine may still cause a reaction.[ref]

What does a low-histamine diet do?

Should you maintain a low histamine diet long-term?

Trying a low-histamine diet for a period of time can give you a lot of insight into how histamine affects your body, but it may not be a diet you want to continue long-term. A low-histamine diet restricts many healthy foods that you may enjoy, such as spinach, strawberries, and avocados.

Use a low histamine diet as a tool to learn which histamine-containing foods bother you the most. It can also be a short-term way of getting histamine responses under control.

Notes about Histamine and Mast Cells
A compilation of notes and reference studies on the functioning of mast cells and histamine receptors.

Tyramine: The Cheese Effect and Your Genes
Tyramine is another biogenic amine found in a lot of the same foods as histamine. An inability to break down tyramine can cause a variety of symptoms.

Recipes and Foods for Histamine Intolerance
Interested in low histamine foods and recipes? This article focuses on foods high in histamine so you can easily eliminate them from your diet.