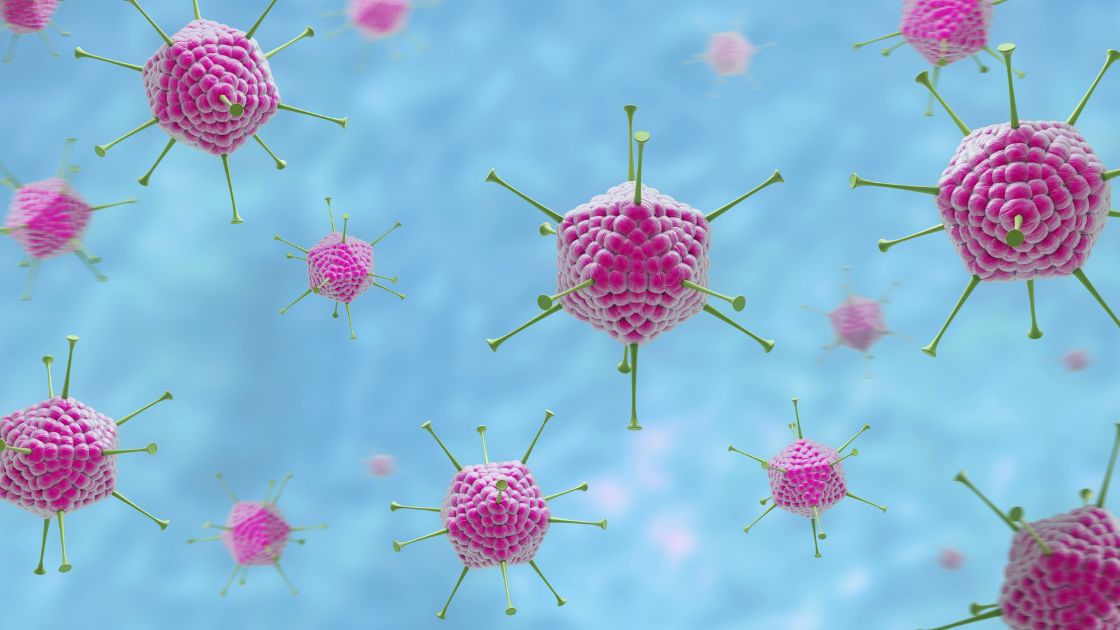 When looking at the research on obesity, one thing becomes clear: it’s complicated!

For years we have been told to eat less and exercise more.

While that is healthy-sounding advice, it doesn’t seem to be curing the obesity epidemic. According to the World Health Organization, obesity has doubled since 1980. Worldwide in 2014, 1.9 billion adults were overweight.[ref] It’s almost like it spread through the world like a viral epidemic.

About 70% of people in the US are now classified as overweight or obese. This article digs into one cause of obesity – a specific adenovirus.

Can obesity be triggered by a virus?

It seems odd to think about infectious diseases causing obesity. But an abundance of evidence shows that, for some people, this is likely a cause. Specific adenovirus strains have links to increased fat mass and obesity in humans and other animals.

You may be thinking like I was — “Really? A virus causing obesity? Sounds implausible!”

Let’s dig into the science of this…

Adenovirus is a family of viruses with many different species causing a variety of symptoms in humans as well as other animal illnesses.

Human adenoviruses are non-enveloped, double-stranded DNA viruses. There are more than 50 distinct adenovirus types causing human infections, and most are spread by direct contact.

In humans, different types of adenoviruses can also cause gastroenteritis, croup, bronchitis, pneumonia, and more.[ref] Thus, adenoviruses are both varied and very common.

Certain species of the adenovirus (Ad-5 and Ad-36) now have links to adipogenesis, or the creation of fat cells, in humans and animals. This causes weight gain in people and is linked to an increased risk of obesity.[ref] (NOTE – I want to be perfectly clear that this is not the same strain of adenoviruses used in Covid vaccines.)

While it seems counterintuitive that a virus can cause obesity, let me explain a few of the hundreds of studies showing not only a link but also causation of increased fat accumulation due to adenovirus-36 (Ad-36):

Human studies on adenoviruses and obesity:

Why do certain adenoviruses cause obesity?

Viruses enter certain types of cells in a host via a receptor, and then the virus hijacks the cell’s own cellular functions to replicate.

Different viruses use different receptors to enter a cell. For example, the SARS-CoV2 virus uses the ACE2 receptor that is prevalent in lung cells and intestinal cells, while HIV hijacks immune cells via the CCR5 receptor.[ref]

Adenovirus 36 infects adipose tissue and alters metabolism there. It upregulates the production of new fat cells.

Both animal and human studies show that this has both benefits and drawbacks.

On the plus side, Ad-36 infection may improve glycemic control, which decreases the risk of diabetes. The virus upregulates the PI3K and GLUT4 pathways, causing pre-adipocytes to take up more glucose. This increases fat mass while simultaneously decreasing blood glucose levels. Not all is good, though, in regard to the effects of Ad-36. In addition to promoting fat accumulation, it also increases a couple of inflammatory markers, including TNF-alpha and MCP-1.[ref]

Interesting side note: I mentioned above that obesity has doubled since 1980 — and that adenovirus seropositivity has also doubled (Swedish study). One piece of the puzzle as to why this could be happening is the increase in kids in daycare, which has been rising since the 80s. A study looking at overweight kids (9-12) found that Ad-36 increased the risk of obesity by 3-fold and that kids who were in daycare before age 24 months were also at an almost 3-fold risk of obesity.[ref]

While your genes play a significant role in which viruses are likely to infect you, there isn’t a lot of direct research on adenoviruses, obesity, and genetics.

Tentative Connections: Below are several genes involved in both adenovirus infection and obesity — but keep in mind that there isn’t research yet to directly connect the variants to an increased risk of obesity from the adenoviruses.

IL-10 gene: encodes interleukin-10, a part of the innate immune system that modulates the inflammatory system and keeps inflammation under control.

Researchers investigated the connection between IL-10, adenovirus titers, and obesity. The results showed that obese people with high adenovirus titers had a large increase in IL-10. The study also found that people with different IL-10 genetic variants had significant changes in lipid levels and BMI. It concludes: “According to present findings, obesity is linked to increased IL-10 production that is the result of, or lead to, an altered response to pathogens and ensuing chronic low-grade inflammation, perhaps in the context of partial T-cell inactivation.”[ref]

PPAR-gamma: A 2011 study looked at the impact of the adenovirus-36 infection on PPARγ. Results showed that Ad36 up-regulates PPARγ, which is important in regulating fatty acid storage, as well as improving glycemic control.[ref]

PPARG gene polymorphisms have also been studied in reference to high-fat diets and, separately, cardiovascular disease. A meta-analysis investigating 60 studies of the rs1801282 variant found that people with the G allele had a reduced risk of Type 2 diabetes.[ref]

Adenovirus Receptor Variant CXADR: Coxsackie and adenovirus receptor (CAR) is encoded by the CXADR gene. This receptor is a receptor for the Coxsackie B virus and adenovirus 2 and 5.[ref] CARs have been studied in conjunction with their involvement in virus-mediated myocarditis and, more recently, as a risk factor in ventricular fibrillation.[ref] A polymorphism near the CXADR gene, rs2824292, has been found to be associated with levels of expression of CXADR. “Individuals carrying one or two copies of the risk allele (A/G or G/G genotype) displayed significantly lower (0.6 fold) CXADR mRNA expression compared to individuals with the non-risk (A/A) genotype.”[ref] That study did not look at an association with adenovirus infection in reference to the polymorphism.

One doctor theorizes that: “The government and insurance companies do not want to admit that obesity is a disease because then they would have to cover treatment as they do for other diseases.”[ref]

More exercise? It may not be as easy to lose weight via exercise with an adenovirus 36 infection. Increasing exercise improved blood glucose, insulin, and cholesterol, but in children with obesity and Ad-36, exercise wasn’t very effective for weight loss.

In mice, an experimental adenovirus 36 vaccine prevented fat gain when given before Ad-36 exposure.[ref]

Oxytocin and Weight Loss
How do sniffing baby heads, gazing at puppies, and the desire to eat cookies all come together? With oxytocin. Learn how this tiny neuropeptide influences reward systems in the brain and alter metabolism.

SIRTfoods diet: Sirtuins and turning on your skinny genes
Popular social media articles explain that the diet ‘turns on your skinny genes’, which may raise a few eyebrows in the science-minded crowd. (Where exactly is that ‘skinny gene’?) I’m diving into the science of the fascinating SIRT genes, explaining how they work and showing you how to check your SIRT gene variants.