The BCHE gene codes for the butyrylcholinesterase enzyme. The BChE enzyme circulates in the plasma of the blood. It is a cholinesterase that breaks apart choline esters, such as acetylcholine.

Why is this important? Genetic variants of the BChE gene decrease this enzyme’s activity. This can lead to various and seemingly unconnected consequences… such as an increased risk for Parkinson’s or food sensitivity to potatoes.

Butyrylcholinesterase (BChE) is an enzyme, which is a type of protein that causes a reaction to happen in the body.

But before we get into BChE, let’s talk a little about AChE…

Acetylcholinesterase (AChE) is a similar enzyme responsible for breaking down the neurotransmitter, acetylcholine in the synapses of nerves. Think of it as the ‘off switch’ for stopping a neuron from firing repeatedly. It’s one of those really important enzymes that you can’t live without. Period.

Getting a little more detailed: In the synapse of a neuron, acetylcholine causes it to fire, contracting a muscle. AChE causes the break down of the acetylcholine, stopping the contractions and letting the muscle relax. This all happens in an instance. Too much inhibition of AChE results in death. Muscles need to relax – especially those controlling respiration – and excessive inhibition of AChE causes asphyxiation.

Not only can BChE bind to acetylcholine, but it can also bind to other substances that inhibit AChE. In this way, BChE is considered a bio-scavenger, protecting the body from certain toxicants or poisons.[ref]

It is interesting to note that while there are several different genetic variants that reduce the function of BChE significantly, there are very few genetic mutations that decrease AChE significantly. This is another indication of the AChE enzyme being essential for life.[ref]

While the functionality of the BChE enzyme used to be in question, recent research shines a lot of light on this molecule.  BChE is important for:

Let’s dig into all of these topics further…

BChE and recovery from anesthesia (succinylcholine)

BChE levels become important when exposed to certain types of anesthesia. The BChE enzyme controls the breakdown rate of succinylcholine, which is a muscle relaxant used during surgery. People with genetic variants that significantly decrease the amount of BChE (A-variant, below) can have problems coming out of anesthesia and returning to breathing on their own.

Below: AChE and BChE inactivating acetylcholine released from the vagus nerve and acted on a macrophage. Creative Commons license. 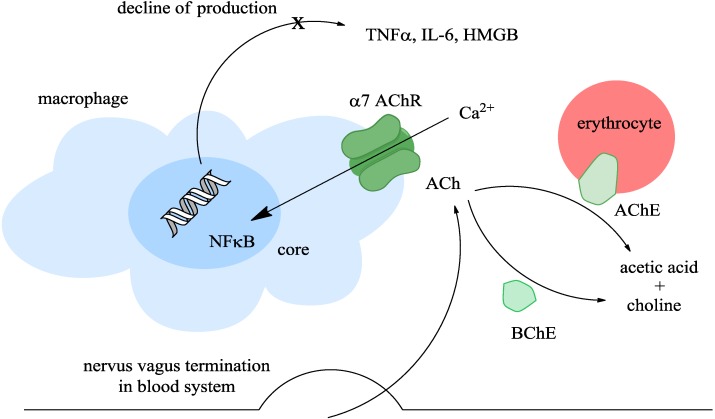 BChE as a bio scavenger:

Inhibiting AChE is generally bad and often deadly. Thus, researchers think this is one reason why we have a built-in system in which BChE is able to break down toxins in order to protect AChE.

AChE inhibitors include some natural toxins, such as snake venom. The nerve gasses sarin and VX are also AChE inhibitors. And pesticides such as organophosphates and carbamates are AChE inhibitors.  BChE may act as a bio-scavenger in the plasma, breaking down these molecules before they can interfere with nerve transmission and AChE.

In the past (1940s-’60s), tests on military volunteers determined the effects of low levels of the nerve agents that targeted AChE. These human tests demonstrated the vast differences between individuals’ responses to nerve gas, and the differences showed ties to genetic variants in the BChE gene. Modern animal and cell studies have confirmed this since we thankfully no longer test nerve gas on people![ref]

Organophosphates are a class of insecticide commonly used in agriculture, veterinarian use, home pest control, and mosquito control. They are the most widely used type of pesticide.

Carbamates are another prevalent insecticide. Carbamyl (Sevin), a carbamate, is extensively used as an insecticide in home and agricultural use.

BChE possibly acts as a bio-scavenger protecting AChE from being impacted by organophosphates and other substances.[ref]  People with BChE genetic variants may be more prone to detrimental effects from exposure to organophosphates.[ref]

More importantly, one of the genetic variants that increases the risk of Parkinson’s due to pesticide exposure is in the BChE gene. (below)

The edible nightshade vegetables include potatoes, tomatoes, eggplant, and peppers.  All of the nightshade family produce varying amounts of glycoalkaloids, which are AChE and BChE inhibitors. The plants produce these compounds to repel insects.[ref][ref][ref]

Getting more specific: One component of potatoes is a glycoalkaloid compound called α-solanine. The compound is found in the leaves and stems as well as in the tuber that we eat. When potatoes are exposed to light, they turn green due to increased α-solanine. (Green potatoes are toxic – don’t eat them!)[ref]

The amount of glycoalkaloids in plants depends also on exposure to light, mechanical damage to the plant, and ripeness or spoiling of the plant. Glycoalkaloids levels do not become altered by cooking.[ref]

It is theorized that BChE variants interact with the alkaloid compounds in nightshades — but that depends a lot on the amount eaten along with other possible AChE inhibitors such as pesticides.[ref]

This has led some clinicians to theorize that people who carry genetic variants that significantly reduce BChE function may have food sensitivities to nightshade vegetables.

Nightshade vegetables have associations with increased joint pain, especially in people with rheumatoid arthritis.[article] Potatoes, especially fried potatoes, are thought to increase the risk of inflammatory bowel diseases due to their glycoalkaloid content.[ref] Additionally, people with psoriasis may be more prone to nightshade sensitivity. A survey from the National Psoriasis Foundation found eliminating nightshades was beneficial for about half of psoriasis patients who had tried it.[ref]

Recently, researchers have found that there may be another physiological role for BChE in humans. It has been shown that BChE also inactivates ghrelin, the ‘hunger hormone’. The cells of the stomach release ghrelin, thus causing the stimulation of muscle cells in the stomach that gives us ‘hunger pains’. Ghrelin also activates the brain, causing us to seek out food and helps drive food cravings. Finally, ghrelin is also active in fat storage.[ref]

Both humans and animals with a lack of BChE have higher than normal ghrelin levels. When researchers altered the BChE gene in mice so that they overexpress BChE, the mice had significantly lower ghrelin levels. Researchers have also found that increasing BChE levels keep formerly obese mice from rebounding and gaining back the weight.[ref]

When is cholinesterase inhibition a good thing?

While too much of a cholinesterase inhibitor is obviously bad (death is never a good side-effect), a minor inhibition of cholinesterases can be beneficial in some circumstances.

Extending the time a neuron has exposure to acetylcholine can be beneficial in some cases of Alzheimer’s disease. It also can increase REM sleep, which could be beneficial at times in relation to learning and memory. Also, cholinesterase inhibitors are sometimes prescribed for schizophrenia.[ref][ref]

In fact, a recent study in mice looked at a couple of traditional African medicines made from the leaves of plants in the nightshade family. The study found that the leaves of the African eggplant and Black nightshade may help with cognitive impairment in mice.[ref]

The dose makes the poison is a well-known saying, and the right amount of cholinesterase inhibition can be beneficial in specific medical circumstances. (This is definitely not an ‘experiment with this at home’ situation!) Carrying a genetic variant that decreases BChE could be beneficial in some ways – and thus explains why a BChE variant that mildly decreases enzyme function is common in the human population.

Genetic Variants of the BChE gene:

The variants below reduce the function of the BChE enzyme. Researchers think that the effect is additive, so if you have two variants (e.g. the A variant and the F variant) the effect is stronger than if you have one variant. [ref]

The A-variant is a more severe change in the BChE enzyme function. About 2% – 5% of certain population groups carry one copy of the A-variant. This causes both a decrease in the function of the enzyme and also an alteration to the way that it functions.

The K-variant of BChE decreases the production of the enzyme by 33%. This is a more common variant, and up to 30% of some population groups have one copy of the K-variant.

There are other variants in the BChE gene that cause more minor reductions in the enzyme function. These may be more important if combined with the above K-variant or A-variant.

These last two are rare mutations, known as F1 and F2, which can cause a delayed recovery from succinylcholine anesthesia.

Everyone should avoid exposure to nerve gas, but anyone with a BChE variant may be even more at risk…  If you’ve been exposed to organophosphates or nerve agents in the first Gulf War, you may be interested in the genetic connections between the BChE variants and Gulf War Syndrome.

If you are interested in knowing which pesticides are commonly detected on foods in the US by the FDA, check out the What’s On My Food website.  The Environmental Working Group puts out a yearly list of the fruits and vegetables found with the most pesticide residue.

The alkaloids in nightshades are theorized to cause some people to have aching joints and muscle stiffness. These alkaloids interact with the BChE enzyme and carriers of the variants may be more likely to have problems with excessive nightshade intake.

An easy way to know if this is a problem for you is to stop eating nightshades for a few days. See how you feel.  Then eat a potato with the skin on it. Perhaps top it with some salsa with hot chili peppers…

Removing the skins of potatoes (and especially the eyes) cuts down on the alkaloid content. Ripe tomatoes have significantly less alkaloid content (alpha-tomatine) than green tomatoes.[ref]

The technical term for the nightshade family is Solanaceae.

People carrying the BChE k-variant have a delayed recovery from succinylcholine which is a muscle relaxant when intubating patients under anesthesia. This can cause a delay in returning to normal function (a problem when that normal function involves breathing) But while the response is delayed, it isn’t by much in people who are heterozygous for the K-variant (less than a minute on average).[ref]

The risk of Alzheimer’s may be increased in people carrying the BChE K-variant. And people who are homozygous for the K-variant may have a negative response to AChE inhibitors for Alzheimer’s disease. In fact, BChE k-variant carriers had worsening symptoms with the medication donepezil.[ref][ref]

Should you eat organic? Detoxifying Organophosphates
Is buying organic worth the extra cost? There isn’t a one-size-fits-all answer to that question. Pesticides sprayed on conventionally grown foods affect people differently. Some people carry genetic variants that decrease their ability to detoxify specific pesticides, others may be more resilient.

Alzheimer’s and Light at Night: Taking action to prevent this disease
With the advent of consumer genetic testing from 23andMe, AncestryDNA, etc, it is now easy to know if you are at a higher risk of getting Alzheimer’s Disease (AD). Those with APOE ε3 are at normal risk for Alzheimer’s, and those who carry an APOE ε4 allele (or two) are at an increased risk.