Your weight is controlled, in part, by your brain. There is a complex feedback system that lets your brain know how much energy you have stored — and a hardwired drive to eat when your brain thinks you need more food.

This article dives into the science of ghrelin, a hormone involved in the appetite control system. We will explore how ghrelin controls appetite and then explain the genetic variants that link ghrelin to weight gain.

Ghrelin is a peptide hormone which stimulates appetite and regulates metabolism. It drives us to seek out food and eat.

At the most basic level, we are all driven to seek out food. The motivation to eat is inherent to all animals because we simply can’t live without energy from food.

Tasty foods like Doritos and pizza haven’t always been at our fingertips. Our ancestors had to eat to survive. Thus, the innate drive to eat is strong enough to drive people to eat less tasty foods, such as liver, insects, or turnips. This is where ghrelin comes in, prompting us to eat to survive.

Ghrelin was discovered about 20 years ago and first investigated as a hormone controlling the release of growth hormone (GH). Over the past decade, research shows that ghrelin stimulates appetite, [ref] 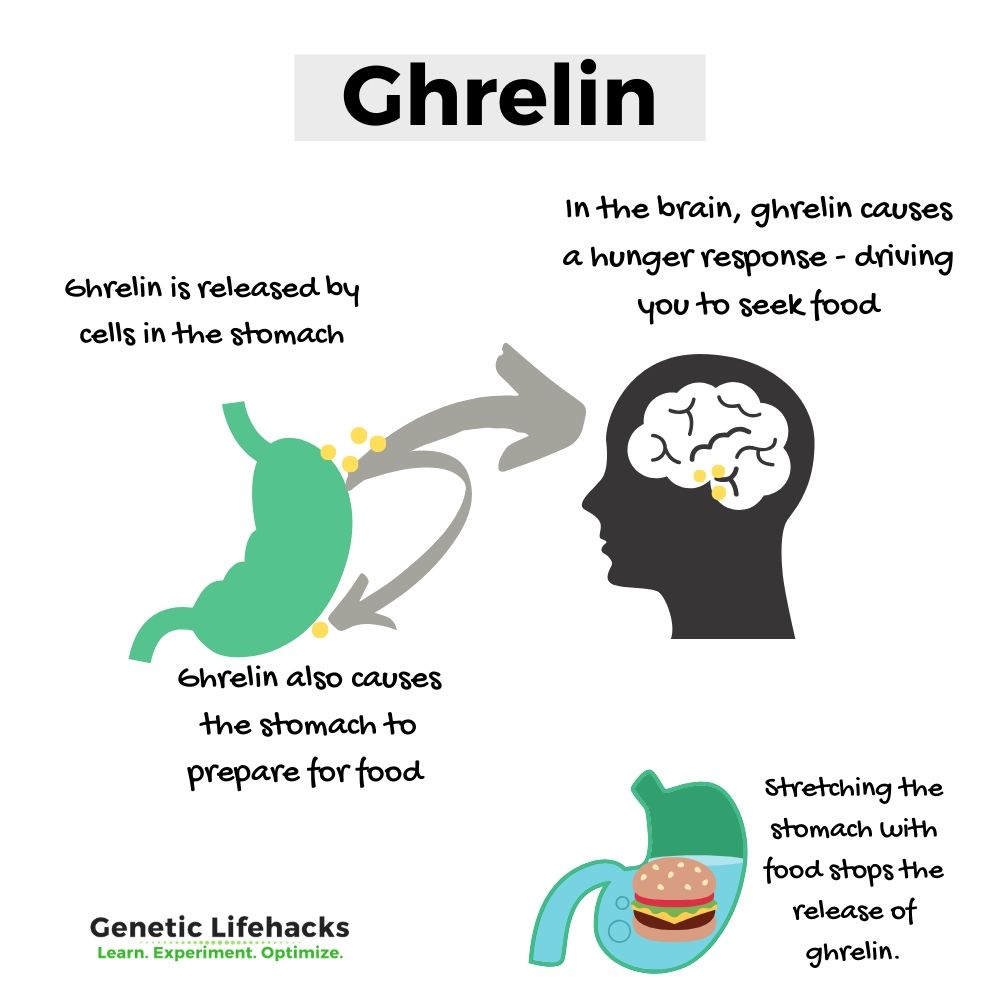 What causes ghrelin to rise and fall?

The cells lining the stomach secrete ghrelin, and then the hormone travels to the brain.

In the hypothalamus, ghrelin receptors (GHSR receptors) receive the signal for the need for food. This triggers a series of actions that result in you seeking food.[ref]

At the same time, ghrelin causes the stomach to prepare for food in two ways:

What causes ghrelin to be released? Both hypoglycemia (low blood glucose levels) and low body weight can act to trigger ghrelin.

Fasting increases this hormone, and eating – specifically filling up the stomach – decreases it.

Researchers don’t have all the answers yet for ghrelin, and there is a lot of ongoing research into the link with BMI, cardiovascular health, and aging.[ref]

Members: Log in to see your data below.
Not a member? Join now.

GHRL is the gene that “encodes the ghrelin-obestatin preproprotein that is cleaved to yield two peptides, ghrelin and obestatin.”[ref]  There are several polymorphisms in the GHRL gene that have been studied in reference to obesity and appetite.

How big is the impact of these two variants on obesity? While it may depend on the population being studied, most of the studies show the impact of the GHRL variants is not all that great. They add to the risk of obesity, but the increase in risk isn’t huge.[ref]

The GHSR gene codes for the Growth Hormone Secretagogue Receptor, which is the receptor for the ghrelin hormone.

The CLOCK gene codes for a protein that is part of our innate circadian rhythm mechanism. Circadian rhythm plays a big role in metabolism, weight, appetite, sleep, mood, and overall health.

For ghrelin to be in its active form, the enzyme ghrelin-O-acyltransferase (GOAT) acts upon ghrelin to acetylate it. Researchers are investigating drugs that could stop the GOAT enzyme.[ref][ref]

Pomace olive oil:
Pharmacological investigations of GOAT inhibitors have discovered synthetic compounds similar to oleanolic acid.[ref] Oleanolic acid, a natural compound found in pomace olive oil, has been investigated for its effect on ghrelin-O-acetyltransferase as well. While the study found that it reduced body weight, there was not an acute effect on ghrelin levels.[ref] Other studies on oleanolic acid have shown a variety of health benefits in humans (and mice) related to glucose tolerance and cardiovascular disease.[ref][ref][ref]

Carbohydrates suppress ghrelin after a meal:
Ghrelin seems to be suppressed more after eating higher carbohydrates/ lower-fat foods in comparison with high-fat/low-carb foods.[ref][ref]

Carbs plus protein for breakfast:
One study of sedentary, obese adults found that a breakfast with protein and carbs (low fat) was better for satiety and increased ghrelin levels more than a low-carb breakfast. [ref] Note that the adults in the study were not diabetic.

FTO: The ‘fatso’ gene
The FTO gene is nick-named the ‘fatso gene’ because of its association with obesity. This article digs into the current research on the FTO gene and then will give you some science-based options for controlling your weight if you carry the FTO genetic variant.

Leptin Receptors: Regulating Hunger
Do you wonder why other people don’t seem to struggle with overeating? Ever wished your body could just naturally know that it has had enough food — and turn off the desire to eat? It could be that you carry a genetic variant in the leptin receptor gene which is linked to not feeling as full or satisfied by your meal.

Quercetin: Scientific studies + genetic connections
Quercetin is a natural flavonoid acting as both an antioxidant and anti-inflammatory. This article focuses on the results of clinical trials involving quercetin as well as linking to specific genetic topics. By using your genetic data, you can make a more informed decision on whether quercetin is worth trying.

Berberine: Research, Absorption, and Genetics
Berberine is a supplement that I’ve written about as a ‘Lifehack’ in a number of different articles. It is a natural compound with some amazing research on it in animal and cell studies, and it seems to be almost unbelievable. The drawback seems to be poor absorption in the intestines decreasing its effectiveness.