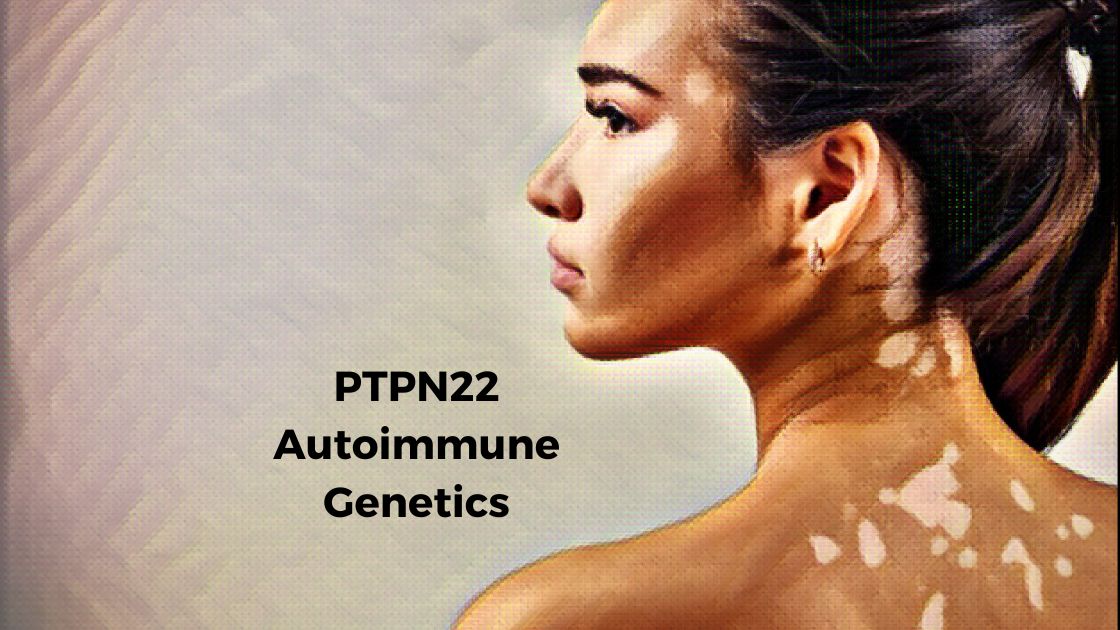 The body continually balances between fighting off dangerous pathogens and keeping the immune response in check. The PTPN22 gene plays a pivotal role in that balance, and genetic variants (SNPs) in PTPN22 increase your risk of autoimmune conditions such as vitiligo, alopecia, RA, type 1 diabetes, and autoimmune thyroid diseases.

Genome-wide association studies allow researchers to cast a wide net, searching for genetic variations that increase susceptibility to diseases or conditions. One of the first autoimmune-related variants that genetic researchers discovered is in the PTPN22 gene (protein-tyrosine phosphatase nonreceptor 22).

This unexpected discovery left researchers searching for the answer to ‘why PTPN22?'[ref][ref]

A balancing act between killing invaders and not hurting your own cells.

The body produces T-cells and B-cells as part of the immune system. These are the cell types that recognize danger (e.g., bacteria, viruses) and identify non-danger (e.g., your own cells).

Variants in the PTPN22 gene change the way that it functions, causing an increase in the inhibitory function of B-cells.[ref][ref]

What if you don’t have an autoimmune disease?

Research shows that even people without autoimmune diseases have a change from the PTPN22 R620W variant. People with even one copy of the variant have increased autoreactive B cells and autoantibodies.[ref]

Additionally, research seems to show that people with the PTPN22 variants are at a decreased risk of Crohn’s disease and Behçet’s disease.[ref]

The rs2476601 R620W variant is a well-studied link to autoimmune diseases, with over 1,000 studies that reference it.

Rheumatoid Arthritis Genes
Rheumatoid arthritis (RA) is a form of joint pain that is caused by an autoimmune response. About 1% of the population deals with the pain of RA. This article explains RA, the different genes that increase susceptibility to RA, and possible solutions based on the genetic variants.

Chronic Inflammation & Autoimmune Risk – IL17
Inflammation can be blamed for everything from heart disease to mood disorders to obesity. Yet, how does this somewhat nebulous idea of too much inflammation tie into our genes? It seems that some people have a more sensitive immune system and are more prone to inflammatory reactions.