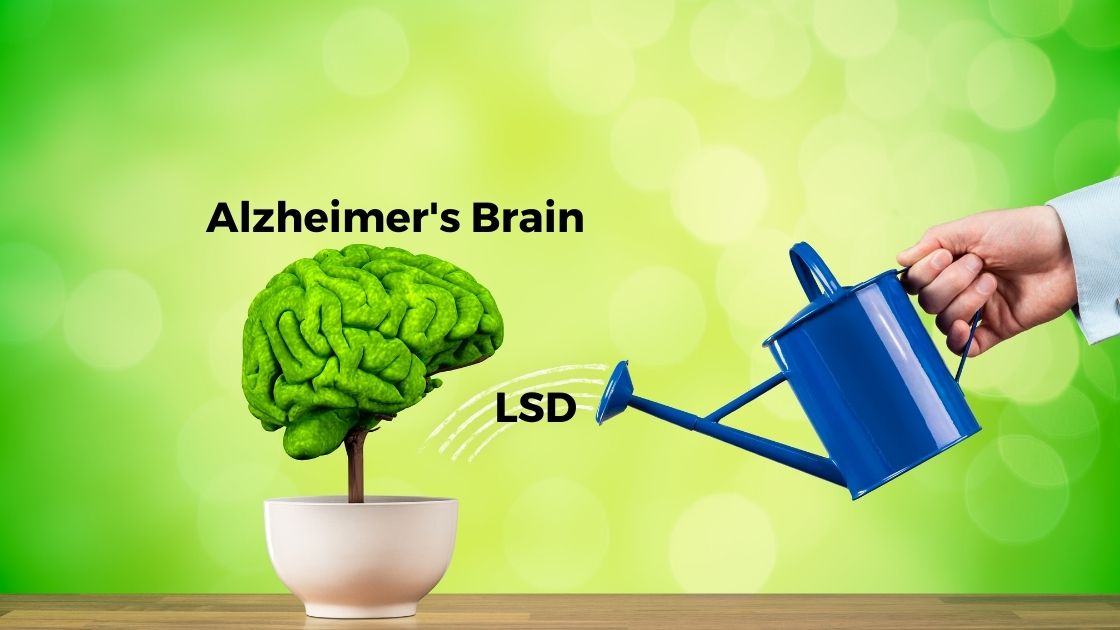 What do Alzheimer’s disease and LSD have in common?

The serotonin 2A receptor…

Clinical trials are underway for using low-dose LSD or psilocybin, two psychedelic drugs that bind to the serotonin 2A receptor, to treat Alzheimer’s disease.

This article digs into current research on the serotonin 2A receptor, psychedelics response, and genetic variants — with a focus on brain aging and dementia. Members will see their genotype report below, plus additional solutions in the Lifehacks section. Join today.

Serotonin and the Serotonin 2A Receptor

In the brain, serotonin helps to transmit signals between neurons. It is involved in learning, mood, memory, and emotions. Only about 1 – 2% of the body’s serotonin is found in the brain.[ref]

Serotonin cannot cross the blood-brain barrier, so it has to be synthesized in the brain from tryptophan. The body tightly regulates serotonin levels and it is broken down in the brain by the MAO (monoamine oxidase) enzyme. MAO inhibitors are a class of anti-depressant medications.

Serotonin is present in all animals and acts as either a hormone or a neurotransmitter.

There are seven different families of receptors for serotonin in the human body, causing different actions to occur via binding to serotonin. The receptors are known as 5-HT or 5-hydroxytryptamine receptors.

The serotonin 2A receptor (5-HT2A) is found throughout the body, including in the brain. It is important in regulating memory, mood, cognition, appetite, anxiety, perception, sleep, thermoregulation, and vasoconstriction.

When activated, the effect of the serotonin 2A receptor is to increase the excitability of the neuron. The activation of this receptor causes:

In other words, this isn’t a straightforward equation of serotonin 2A = excitation in the brain.[ref]

So why do we care about serotonin 2A? It causes some unique effects in the brain, which could be important for mood, cognition, and preventing dementia.

Psychoactive chemicals and serotonin 2A

Humans have been using psychoactive chemicals in various forms throughout history. From Native Americans using peyote (mescaline) to Mazatec priests using psilocybin mushrooms, many historical uses of natural psychedelics have been recorded.

While serotonin is the naturally produced ligand that binds to the serotonin 2A receptor, certain drugs, and natural substances also can bind to this receptor, causing interesting effects.

Drugs that bind to the serotonin 2A receptor include LSD (lysergic diethylamide), mescaline, DMT, and psilocybin.[ref]

Hallucinogens at higher levels cause altered states of consciousness – changes in mood, perception, and thinking. Animal experiments show that binding with the serotonin 2A receptor, also known as the 5-HT2A receptor, is necessary for the hallucinogenic effects of certain drugs.

Interestingly, there are a few drugs that bind to the serotonin 2A receptor that do not cause hallucinations or altered cognitive states. These include lisuride (Parkinson’s medication) and ergotamine (migraine med).[ref] It seems to depend on how strongly different parts of the receptor are activated. Ergotamine is derived from ergot, which is a fungal growth on rye plants that can cause hallucinations.

What else does the serotonin 2A receptor impact?

The laws on testing psychedelics have just been changed in the past couple of years, allowing research on their efficacy in treating mood disorders. Prior to this, laws put into place in the 1970s during the ‘war on drugs’ in the US kept these compounds from being available for research.

The Aging Brain: why psychedelics and the serotonin 2A receptor may be important

Studies over the last decade have investigated the effects of serotonin 2A receptor agonists on depression and anxiety. Specifically, researchers have found:

As we age, the number of serotonin 2A receptors in the brain decreases significantly.[ref]

Importantly, these receptors are located in parts of the brain impacted by dementia including the prefrontal cortex and the hippocampus.[ref]

Psilocybin and LSD increase neurogenesis – the growth of neurons – and induce brain plasticity.[ref]

Importantly, psychedelics can increase brain plasticity at very low doses (microdoses) which do not impair function or cause hallucinations.[ref]

Additionally, safety studies on microdoses of LSD and of ayahuasca showed no detrimental side effects.[ref][ref] Most of the studies are rather small, though, so larger and more rigorous studies are needed here.

Alzheimer’s and serotonin 2A receptors:

Alzheimer’s disease remains the primary cause of dementia and affects about 10% of people over the age of 65. This creates a huge economic burden, as well as greatly impacting family members who act as caregivers. While mortality rates for stroke, heart disease, and certain cancers are decreasing, the number of deaths for Alzheimer’s increased by 71% between 2000 and 2013.[ref] Current numbers are even worse.

Research shows reduced serotonin levels in the cortex of people who had psychosis with Alzheimer’s disease (postmortem study).

Additionally, MAO-A levels are also decreased in Alzheimer’s. MAO-A (monoamine oxidase) is the enzyme that breaks down serotonin, regulating the amount of serotonin available.[ref]

I mentioned above that serotonin also impacts the immune system, which is integral to the formation of amyloid-beta plaque in the brain (increased in Alzheimer’s patients). Along with elevated cytokines such as TNF-alpha, the reduction of serotonin has been shown to impact the formation of amyloid-beta plaques as well as increasing depression in Alzheimer’s patients.[ref][ref][ref]

While animal studies on SSRIs were initially exciting, SSRI studies for Alzheimer’s patients showed mixed results. SSRI’s increase the amount of time that serotonin hangs out in the synapses of the neurons, but it doesn’t seem to reverse or stop Alzheimer’s pathology in humans, at least in the short term.[ref][ref][ref][ref]

So why would a serotonin 2A agonist, such as LSD, reduce Alzheimer’s pathology?  Increasing the amount of time that serotonin hangs out in the synapse in the brain doesn’t necessarily increase the serotonin 2A receptors in the aging brain.

On the other hand, psychedelic drugs increase the outgrowths of the serotonergic neurons, thus increasing the number of serotonin 2A receptors.[ref]

Increasing neurogenesis, plasticity, and brain connectedness – rather than a focus on serotonin – seems to be the key here.[ref][ref]

This is a really well studied genetic variant. Other studies on rs6313 (unrelated to Alzheimer’s/brain aging) show:

Other studies on rs6314 (unrelated to Alzheimer’s/brain aging) show:

A common genetic variant in MAOA causes a decrease in the amount of MAOA produced. The MAOA gene is found on the X chromosome, so males only have one copy of the gene.  You may be wondering about the effects of inhibiting MAOA with psychedelics in a person that already has impaired MAOA enzyme function… While it seems like this could be a bad combination, I can’t find any research on this yet.

If you want to know more about your genetic risk of Alzheimer’s disease, you can check your APOE type.

Please note that I’m not advocating that you microdose LSD, psilocybin, or do anything illegal. The information on the research studies is presented for informational purposes, and it truly is preliminary.

A lot more research needs to be done on this topic before psychedelics can be used for Alzheimer’s, but how exciting to see this avenue of research being pursued. John’s Hopkins University is currently conducting clinical trials using psilocybin in Alzheimer’s patients.[ref]

So what can you do to alter serotonin and the serotonin 2A receptors in the brain if you live in a place where psychedelics are illegal?

Tryptophan is the precursor amino acid for serotonin. It can cross the blood-brain barrier (unlike serotonin). While not a cure for Alzheimer’s, having sufficient tryptophan available for serotonin and melatonin production is part of overall brain health. Does everyone need to supplement with tryptophan? Probably not. Tryptophan is abundant in diets that contain enough protein. But if you think you are lacking tryptophan, it is readily available as a supplement.

Keep an eye on the current research and studies coming out on this topic. Many times, research and clinical trials will show efficacy for years (decades!) before treatment is widely accepted.

Talk with your doctor about your options if you are experiencing the first stages of memory loss. While there isn’t yet an approved medication for reversing cognitive decline, there are currently medications that slow the progress of Alzheimer’s.

Finally, here is a video interview of the researcher discussing the mechanism of psychedelics for Alzheimer’s:

Recap of your genetic variants:

Serotonin: How your genes affect this neurotransmitter
Serotonin… a word that brings to mind a commercial that might show our happy brain neurons bouncing serotonin between them. There is a lot more to this molecule than most of us realize! This article covers how the body makes and transports serotonin and the needed receptors to complete its pathway.

Boosting NAD+ levels to fight the diseases of aging
Explore the research about how nicotinamide riboside (NR) and NMN are being used to reverse aging. Learn about how your genes naturally affect your NAD+ levels, and how this interacts with the aging process.