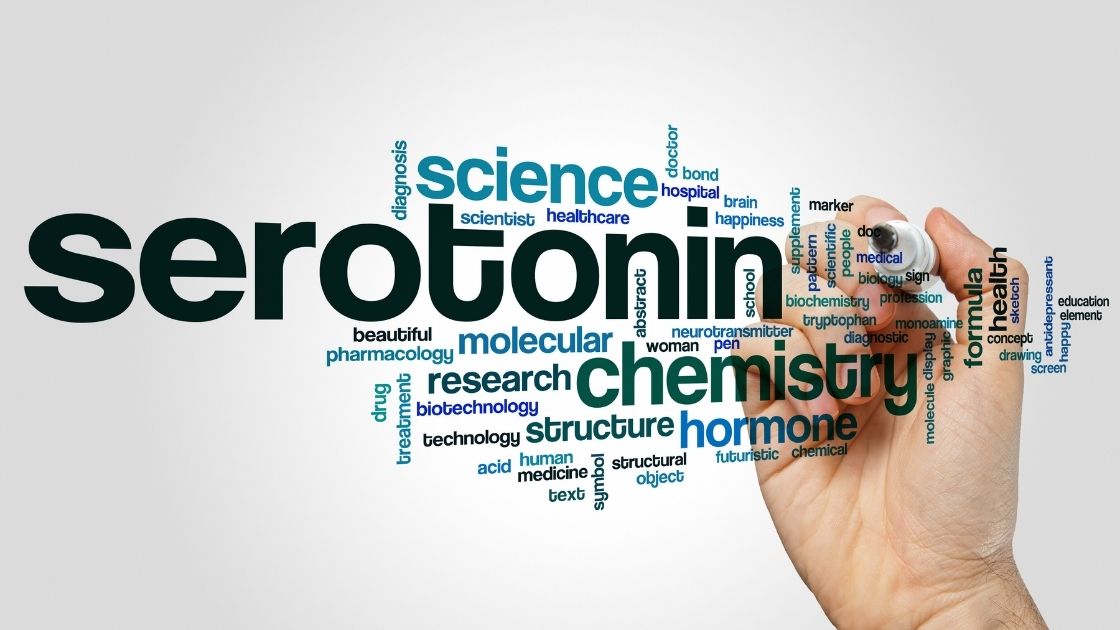 Serotonin… a word that brings to mind a commercial that might show our happy brain neurons bouncing serotonin between them.

There is a lot more to serotonin than most of us realize! This article covers how the body makes and transports serotonin and the needed receptors to complete its pathway. I’ll explain the genetic variants that impact the serotonergic system and then go through the diet, supplement, and lifestyle changes that impact serotonin.

What does serotonin do?

In the brain, serotonin acts in several ways:

But there is more to serotonin than just its impact on the brain.

About 90% of serotonin is made in the gut and helps to regulate motility.[ref] Serotonin also regulates other functions such as; bone mass, cardiovascular health, the endocrine system, and appetite.

Some researchers believe that imbalances in serotonin may play a role in depression or anxiety. Common antidepressants include SSRIs (selective serotonin reuptake inhibitors) and are thought to increase serotonin levels in the brain. However, the method through which they work is still not completely understood.[ref]

Another link between serotonin and depression is that serotonin modulates immune function.[ref] Increased inflammation is implicated in causing major depressive disorder for some.

Recent animal research shows that one reason that SSRIs may not work for everyone is due to increased inflammation. The study showed that in inflammatory situations, histamine is upregulated and SSRIs act in off-target actions on histamine instead of increasing serotonin. In this study, decreasing histamine levels increased the SSRI effectiveness.[ref]  (Read more about histamine and check your histamine intolerance genes.)

Like most signaling molecules and neurotransmitters, serotonin first needs to be created (synthesized), then it needs to be transported, and finally the signal needs to be received by a cellular receptor. 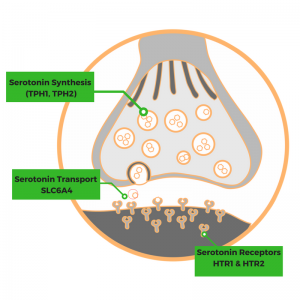 Transport: Serotonin is transported by SLC6A4, which is also known as SERT or sodium-dependent serotonin transporter.

All of these work in concert: from the creation of serotonin from amino acids to the transport of serotonin to the receptors that are necessary to receive this chemical messenger.

Serotonin Syndrome: Too much serotonin

Ultimately, balance is the key to serotonin. Too much serotonin can result in serotonin syndrome. Symptoms include restlessness, confusion, shivering, diarrhea, and, potentially, death.[ref]

Serotonin syndrome is usually caused by drugs such as MAOIs or SSRIs that affect the rate of serotonin break down.[ref]

Below is a compilation of studies on genetic variants that affect serotonin synthesis, transport, and receptors. Please treat this as a starting point for learning more about your genes and serotonin. Talk with your doctor if you have any medical questions.

Tryptophan hydroxylase is an enzyme that catalyzes the reaction that produces serotonin from the amino acid tryptophan. Iron is a co-factor, and BH4 is also used in the reaction.

There are two genes that code for tryptophan hydroxylase:

(Learn more about tryptophan and how it converts to serotonin or kynurenine.)

Several TPH2 genetic variants have links to psychiatric issues such as obsessive-compulsive disorder, depression, and bipolar disorder. These variants affect the production rate of serotonin in the brain.

Interactions between different genetic variants can be important as well. There are a couple of interesting studies that look at the combination of carrying the rs4570625 genotypes with the BNDF Val66Met (rs6265) genotypes. Those with rs4570625 G/G and rs6265 T/T were more likely to have “impaired inhibition of negative emotional content”.[ref] (The next time you start yelling at someone, be sure to think about your “impaired inhibition of negative emotional content“!)

While there is still debate among researchers on this topic, one recent paper explains that the function of the brain serotonin receptors is to moderate stress and anxiety through patience and coping.

The HTR1A gene codes for a serotonin receptor.

The HTR1B gene codes for another serotonin receptor.

SLC6A4 is the gene that encodes the serotonin transporter. You will find it as SERT or 5-HTT in some of the research. The 5-HTTLPR variant is a variable number tandem repeat. This just means there is a short version of the gene and a long version – due to repeated parts of the gene.

A lot of researchers have studied the 5-HTTLPR short/short and long/long forms. Initial studies in the ’90s and early 2000s found that those with the short version of the gene were more prone to depression due to stressful events. Here is a nice article summarizing the research that has been done on this gene:  Controversial Gene-Depression Link Confirmed in New Study.

Variable number tandem repeats are not included in 23andMe or AncestryDNA data, but there are SNPs that usually go along with the serotonin transporter repeats. So you can get a pretty good idea of whether you carry the long or short version. A couple of studies have found that two SNPs predict the long or short version of 5-HTTLPR fairly well – around 95+% of the time.[ref][ref][ref]  These are found in both v.4 and v.5 for 23andMe data.

Studies on personality traits and genes tend to show all kinds of different results — with the results of one study often contradicting other studies. So take the following with a grain of salt:

A recent study may explain some of the contradictory results from previous studies.[ref] The researchers found that people who carried two copies of the long allele were more affected by environmental influences on mood (e.g. good or bad life events). Thus, people who carried the long/long genotype were more likely to have a positive mood in a positive environment, but they were also more negative when bad things happened.

Studies show the long or short form may influence how well depression medications work for you:

Serotonin plays a major role in the gut, and IBS patients with a short allele had worse symptoms than those with a long/long version of this gene.[ref]

The short/short genotype also has ties to an increased risk of gastrointestinal intolerance of metformin.[ref]

Below you will find research-supported ways of affecting your serotonin levels. If you need psychiatric help, please be sure to contact a health care provider!

Get outside, be active, and eat well:

While your genes have an effect on serotonin levels in the body, there are also several environmental factors that also influence serotonin production. There is a correlation between higher serotonin levels and exposure to bright light or sunlight.[ref]

Bipolar Disorder, Depression, Circadian Clock Genes
New research shows that depression and bipolar disorder are linked to changes or disruption in circadian genes. Some people carry genetic variants in the circadian genes that make them more susceptible to circadian disruption.