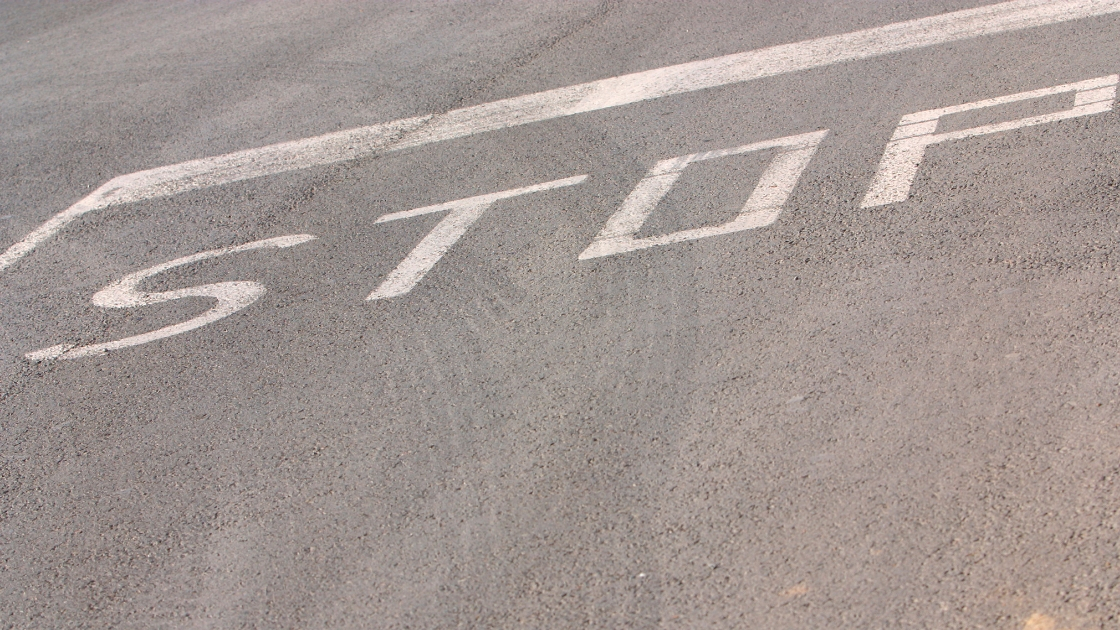 Do you wonder why other people don’t seem to struggle with wanting to eat more? Ever wished your body could just naturally know that it has had enough food and turn off the desire to eat? It could be that you carry a genetic variant in the leptin receptor gene, which is linked to not feeling as full or satisfied by your meal – and thus tend to eat just a little bit more. This may have been a survival advantage when times were lean, and the only things to eat were unappetizing. Not the case in our modern era, with highly palatable foods in easy abundance!

This article dives into the science of appetite, covering leptin, genetics, and why some people don’t get the ‘full’ signal to stop eating. The article wraps up with research-backed ideas for hacking the leptin signal to reduce weight gain.

Leptin is a hormone that is produced mainly in your fat cells (adipocytes). Leptin signals to your hypothalamus (in the brain) that you have enough stored energy already and don’t need to eat.

Leptin is the full signal, and it opposes ghrelin, the ‘hunger hormone’. Together, these two hormones regulate appetite and balance energy expenditure in the body.

When you go on a low-calorie diet, often your leptin levels will increase. This tells your brain that you are in starvation and need to conserve energy — lowering your metabolic rate. One way by which this happens is through leptin causing a decrease in thyroid hormone levels.

Leptin in the brain:

Leptin is the signaling hormone, and that signal has to be received by the neuronal cells. For people who are overweight or obese, there is usually plenty of leptin being produced in the fat cells, but often the leptin signal is not being received. Some researchers theorize that people can be leptin resistant –– when the brain stops getting the signal that you are at the right level of stored energy.

Digging deeper into this…
Neurons in the hypothalamus have leptin receptors and receive the signal from circulating leptin.

Specifically, the leptin receptors on the POMC and CART neurons cause the release of α-melanocyte-stimulating hormone (α-MSH), which in turn activates the melanocortin-4 receptor (MC4R gene). This induces the production of appetite-suppressing peptides. Cocaine- and amphetamine-regulated transcript (CART) and POMC are both neuropeptide proteins that are involved in energy regulation in the hypothalamus.[ref]

CART causes suppression of appetite through leptin — and this is also probably why cocaine and methamphetamine both cause appetite suppression. (No, this is not a good weight loss solution!)[ref]

MC4R is the receptor activated by alpha-MSH. Genetic variants in MC4R are also tied to obesity.

The other signals that the leptin receptor activates – neuropeptide Y and agouti-related protein – reduce the amount of hunger signal. This is like putting the breaks on the hunger signal.

What happens when the leptin receptor has a mutation?

There is a very small percentage of people who are overweight because they don’t produce enough of the leptin hormone and never feel full.[ref] So, not producing enough of the signal (leptin) drives a craving for more and more food. Again – these mutations are rare.

The other side of that coin is having a rare mutation that practically eliminates the function of the leptin receptor. These mutations also cause people to be ‘hyperphagic’ — or insatiably hungry – because the signal isn’t being received in the brain.[ref]  Again – this is not common.

Interestingly, to create obese mice for use in studies on obesity, diabetes, and dyslipidemia, scientists created a mouse strain called db/db, which is bred to have a mutation in the leptin receptor.

The more common leptin receptor gene variants are tied to an increased risk of being overweight, but these variants don’t cause the extreme hyperphagia that the rare mutations cause.

These more common variants are likely to increase your weight – somewhat – through increasing appetite and decreasing metabolism –a little bit.

The leptin receptor genetic variants that are tied to increased weight may also exacerbate leptin resistance.

Here is a great new review paper on the topic if you want to dig into this more: Leptin resistance: underlying mechanisms and diagnosis. 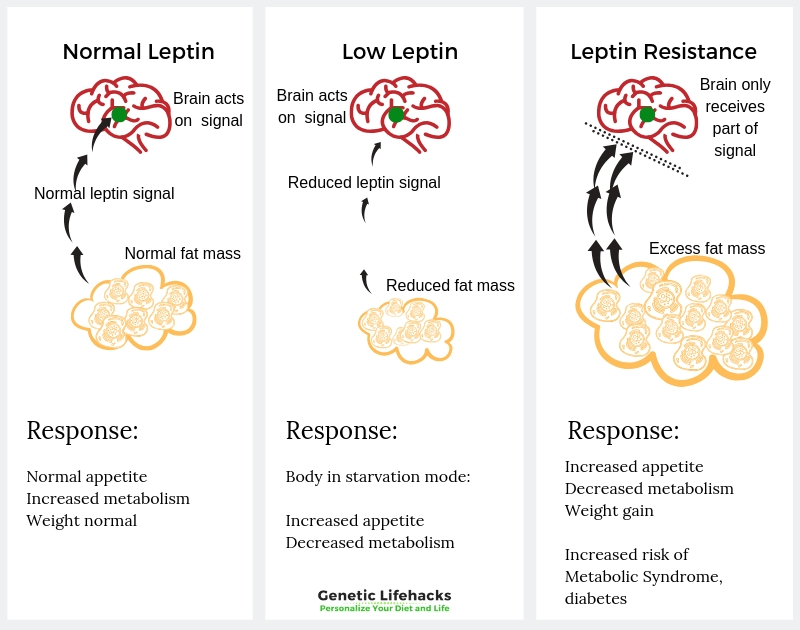 What else does leptin do?

Leptin, as a signaling molecule, does more than regulate appetite. Instead, it is important in several biological functions, and when you think about it, it makes sense to rely on a signal to have enough food to eat.

Fertility and Menstrual Cycles:
Leptin also impacts reproductive hormones in women. It is a signal in the hypothalamus that there is enough fuel available to support pregnancy. This makes sense from an evolutionary point of view — you only want to reproduce when you have enough fuel available. Leptin acts as a signaling molecule in the hypothalamic-pituitary-gonadal axis.[ref]

Low leptin levels, such as when someone is very thin, can cause amenorrhea or lack of a menstrual cycle. In fact, in about 30% of women, these low levels might be the cause of their amenorrhea.[ref]

Too much leptin, on the other hand, causes girls to start menstruating earlier. It also can cause infertility due to ovarian follicles not developing correctly.[ref]

Sleep, circadian rhythm, and leptin:
Melatonin and leptin are interrelated. Melatonin is more than just a ‘sleep hormone’. Levels rise at night and act as a signaling molecule in quite a few circadian-dependent processes. Decreased melatonin levels have been shown to lead to leptin resistance. Animal studies show that adding melatonin ameliorates leptin resistance.[ref]

What causes decreased melatonin? Exposure to light at night in the blue wavelengths. Try turning off overhead lights and shutting off the electronics (TV, phone, laptop) a couple of hours before bed.

At the same time, some pathogens actually alter leptin levels, which then allows the pathogen to encounter less resistance from the immune system.[ref]

In people with obesity, leptin levels are very high (leptin resistance), but there is also an immune system modulatory effect, decreasing T-cell responsiveness and proliferation.[ref][ref]

The LEPR gene codes for the leptin receptor.

Most of the genetic variants below are very common; in fact, up to half of some populations carry the variant. So while leptin receptors may play a role in obesity, if genetics were completely to blame, half the population would be overweight. (Wait, that actually is the case… In the US, 68% of the population is now considered overweight or obese.[ref] Still, these variants aren’t the only cause of obesity.)

Simple changes to food timing and food choices may make a difference for people who carry the leptin receptor variants.

GLP-1 Receptor Agonists for Weight Loss: Genetic Interactions
GLP-1 receptor agonists, like semaglutide and liraglutide, are used for weight loss by increasing the body’s sensitivity to insulin and reducing hunger. However, genetic variants can alter the response in some people.

FTO Gene
The FTO gene is nick-named the ‘fatso gene’ because of its association with obesity. This article digs into the current research on the FTO gene and then will give you some science-based options for controlling your weight if you carry the FTO genetic variant.

MC4R- Growing Up Big Boned
There are several key players in our body’s regulation of hunger, satiety, and energy expenditure. Leptin and ghrelin are two pivotal hormones involved in our desire to eat. Within that leptin pathway, another key regulator of our body weight is MC4R.

Ghrelin: the Hunger Hormone
The hunger hormone ghrelin is important in appetite regulation and satiety. Learn how your genes interact with your diet when it comes to ghrelin levels.