I was excited to see a  preprint article of a study on genetic factors that influence SARS-CoV2 susceptibility (published on May 7th). The study was performed by scientists at the University of California, San Francisco. You can read through the whole study here: The landscape of host genetic factors involved in infection to common viruses and SARS-CoV-2

These researchers used genetic sequencing data from the UK Biobank, which anonymously shares the genetic data of people in the UK who have opted into the research. The UK Biobank had recently announced that they had genetic information on individuals who had tested positive for COVID-19.

For this study, the researchers used genetic data plus information on viral infections for a number of different viruses, including this current SARS-CoV2 virus. The purpose of the study was to highlight genes that were related to genetic susceptibility to various viral pathogens.

Cutting to the chase here, the researchers linked a number of different genetic variants to the susceptibility to SARS-CoV2.

Before I list the genes, let me explain a bit about what the statistics mean.

First, a genome-wide study (GWAS) is going to show the more common variants that are linked to a phenotype. This type of study usually won’t include mutations that may be important but are only found in a small percentage of the population. The recent serology studies are showing that most people who have the virus are asymptomatic. If 94% (NY numbers announce by Cuomo) to 99% of people are asymptomatic[ref], rare genetic variants may be really important here, especially when it comes to younger people who have COVID-19 symptoms.

The research lists the ORs (odds ratios) for the variants.

Finally, I also wanted to point out that there were 1,028 individuals included in the genome-wide association analysis. That is a much smaller sample size than is usually included in GWAS studies due to only having the genetic data for that number of SARS-CoV2 patients.

More genetic studies will come out on this topic. And there will likely be different genetic variants that are shown to be important. So please don’t take this as the ‘final word’ on this topic. Generally, the variants that pop up in a genome-wide association study (GWAS) point to the genetic pathways that are important, rather than specific SNPs.

One last note: this study was done on UK biobank participants (mostly Caucasian population). It is likely that different genetic variants will be important for different population groups.

Here is the listing of variants impacting the risk of SARS-CoV2 infection from the preprint that was published (creative commons license): [ref]

The first variant listed, rs7231584, is in the LDLRAD4 gene. This is an LDL cholesterol receptor gene, also known as C18orf1.[ref]

One connection between LDLRAD4 and viral infections is that LDLRAD4 has been shown to impact TGF-β, which is a pro-inflammatory cytokine. TGF-beta also may be important in fibrosis in the lung tissue.[ref][ref]

The rs7231584 variant is not found in 23andMe or AncestryDNA data, nor are there any other studies on that variant.  Carrying the more common allele for this variant increased the relative risk of COVID-19 by 60%. (Another way of looking at it is that the less common variant protected against infection.)

The second variant that was linked to SARS-CoV2 susceptibility is in the ACE2 gene. This gene codes for the angiotensin-converting enzyme 2, which is the cell receptor through which the coronavirus enters the host cells.

The variant – rs1567893 – is not available in 23andMe, AncestryDNA, etc data sets and there are no other studies on this variant. The minor allele here increases the relative risk of infection by 18% (OR = 1.18), which is not much of an impact.

HLA stands for human leukocyte antigen, and it is an important – and variable – part of the immune system. These are the proteins that are responsible for letting the immune system know what is going on in a cell. On the surface of nearly every cell in the body, these HLA proteins can present peptides from inside the cell to be detected by the immune system. If the immune system recognized the peptide as ‘foreign’, it then will attack the cell, causing it to self-destruct.

The HLA system is comprised of more than 200 different genes, which are classified into two main classes, with subclasses within. All of these have genetic variants, thus giving rise to the ability for some people to be protected against different pathogens. Even novel pathogens, like this new coronavirus, won’t wipe out everyone because we humans have such different innate immune systems. [ref]

Diversity and variability allow us to thrive as a species.

The HLA system has typically been determined using serology testing – like testing for your A, B, O blood type.  Some of the HLA variants are mapped to specific genetic variants, but others are tagged by combos of variants — or are unknown at this point.

The SNPs listed below are linked to — but not 100% definitive for – the HLA types.
Members: Log in to see your data file Not a member? Join now.

HLA-DQB1*06:02 is not available in 23andMe data (that I know of). But this HLA type is interesting in that it is highly linked to narcolepsy susceptibility. [ref]

Taking all of this with a grain of salt…

The researchers conducting the study conclude with: “While the reported associations for SARS-CoV-2 were based on a limited sample size, we believe these findings may be informative when considered in the context of our results for other viral infections, and contribute to the global, pressing need to understand COVID-19, which motivated our rapid analysis of these data. However care must be taken with the interpretation of genetic associations with SARS-CoV-2 status, which should be regarded as preliminary and exploratory given the small number of tests within a biased sample, confounding by factors related to symptom recognition, access to testing, and limited statistical power. ”

Will the HLA types of individuals be important? Undoubtedly.

Will other genes related to immune response also be important? Most likely.

Non-secretors: Norovirus resistance and gut microbiome
A genetic variant in the FUT2 gene controls whether or not you secrete your blood type into your saliva and other bodily fluids, such as your intestinal mucosa. This alters the gut microbiome – and protects you from Norovirus. 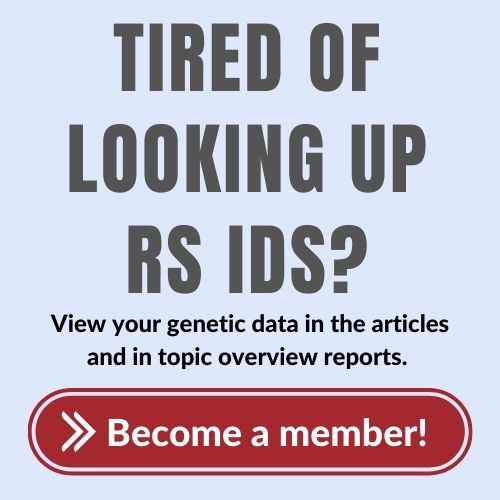