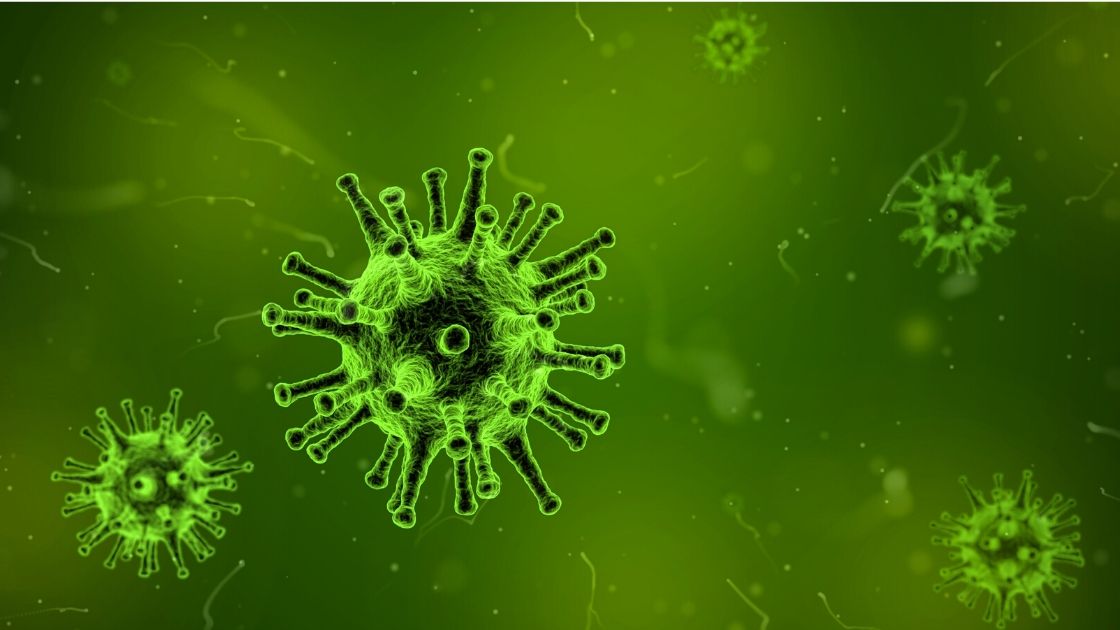 With all the recent news coverage of COVID-19, you may be wondering if you are susceptible to the novel coronavirus, SARS-CoV2. While your first thought may be that everyone catches a virus if exposed, your genes are actually important as to whether or not you will get sick from some viruses and bacteria.

This article dives into the science of viral immunity, explains how your genes are involved, and includes genetic variants that you can check in your genetic raw data to see about some of your own viral immunity genes.

Genetics and Susceptibility to the Coronavirus or Flu

Our genome is shaped by the pathogens that our ancestors survived. This is pretty cool – you carry specific genetic variants passed down to you from ancestors who lived through diseases and epidemics.

Throughout history, humanity’s biggest threats to survival have been the microscopic pathogens that we now battle successfully with antibiotics, antifungals, vaccines, clean water, etc. All of the genetic variants that gave your ancestors a survival advantage in ages past are still written in your genome today. Pretty cool to think about!

Let me give you a few examples:

Let’s take a look at how the immune system works — using the coronavirus as an example.

Then I’ll bring in some of the other genetic variants that gave your ancestors superpowers to defeat tiny microbes.

How does the body protect against viruses?

Viruses are not considered to be living organisms because they don’t have a cellular structure. Instead, they have to get inside a cellular organism in order to reproduce. Biologists define viruses as small, infectious agents. They can infect your cells and then hijack your own cellular processes to replicate themselves. After replication, they spread to other cells, causing more replication and cell death.

Your body has several lines of defense against pathogens – multiple ways to go to battle, defending the body from out-of-control viral or bacterial invaders. Just like the military has multiple branches (Army, Navy, Air Force, Marines) and specialized groups within those branches, your immune system has several ways of detecting, isolating, killing, and defending against pathogens.

For this current coronavirus outbreak, research indicates that the cell entry receptor for this coronavirus is the same as for the original SARS virus – the ACE2 (angiotensin-converting enzyme 2) receptor. [ref – preprint][ref][ref]

For viral infections, interferons are the first wave of defenders. White blood cells produce several different types of interferons to act against a wide range of viruses. Interferons act in a couple of different ways:

These pattern recognition receptors are found on immune cells, such as macrophages and neutrophils, and they detect specific parts of a microbe (bacteria, viruses, etc.) and alert the immune system to attack it.

Two specific pattern recognition receptors are TLR3 and TLR4 (toll-like receptor 3/4), and these are what the body uses to identify the SARS coronavirus.[ref][ref]

The HLA (human leukocyte antigen) genes code for part of what is called the major histocompatibility complex (MHC). These proteins are part of the adaptive immune system and present the antigens, or pieces of the virus, on the surface of a cell. These antigens are like a flag saying, ‘the virus is here!’. There are two major divisions of the MHC – MHC class I and MHC class II. The class I antigens that are presented on the surface of the cell calls in killer T-cells to destroy the cell. Likewise, the class II antigens present their antigens to the T-lymphocytes, which stimulate antibodies.

How do different genetic variants protect against pathogens?

Genes are the blueprint for the proteins that make up the various components of the immune system. You have genes that code for the proteins that act as cellular receptors, the different pattern recognition receptors, several types of interferon, the various cytokines needed to destroy the pathogens, cell signals, and more. It’s a complicated system that keeps us resilient and able to fight off various types of pathogens, including new viruses and bacteria.

Genetic variants can cause slight differences in how any single part of the immune system works. Each of us is unique – able to easily fight off certain foreign invaders and slightly more susceptible to others. As a whole, this makes the human population resilient and powerful. Some people may be more susceptible to certain pathogens, while others may have a mutation that protects them against that specific foreign invader.

There are, of course, trade-offs. Variants that give protection against a specific pathogen often have a downside, such as increased cancer risk or increased risk of inflammatory conditions[ref][ref]. So if you are battling with an overactive immune response, just keep in mind that it may be the same genetic variant that helped an ancient ancestor to survive a leprosy outbreak and then reproduce, passing along the variant.

This genetic uniqueness comes into play for all of the different aspects of the immune system – from the initial response by interferons to the toll-like receptors and then the HLA proteins that present the antigens on the surface of the cells.

The HLA system comes into play here, big time. There are more than 15,000 different HLA class I and class II alleles that have been identified by researchers so far. There is huge diversity amongst individuals in their HLA types — and this is what gives the human population as a whole a way to survive new pathogens. Because of the dizzying array of different HLA types, it is likely that a portion of the population will be able to fight off novel viruses that have just evolved.[ref]

While it is too soon to know who is more susceptible to the new coronavirus strain, there are many well-studied genetic variants that impacted SARS susceptibility – as well as with other viruses.

The HLA-DRB1 gene codes for a part of the innate immune response. The HLA genes vary widely amongst individuals, and they are a big part of why people can respond differently to various pathogens. This HLA-DR variant was linked in two different studies with being found significantly less often in people with the original SARS virus. (On the flip side, the variant below increases the risk of certain autoimmune diseases.)

The CD209 gene codes for a receptor (known as DC-SIGN) that is found on the surface of dendritic cells and macrophages. In macrophages, which are a type of white blood cell, the DC-SIGN receptor is responsible for binding to mannose-type carbohydrates found on many viruses, bacteria, and fungi. (Interesting study that includes the link with Neanderthals, this gene, and viruses)

The MBL2 gene codes for mannose-binding lectin 2, which is part of the immune system that recognizes carbohydrate signatures from foreign pathogens.

The OAS1 gene codes for a protein that is induced by interferon. The OAS1 protein activates an enzyme that degrades viral RNA and inhibits the replication of the virus.[ref]

The MX1 gene codes for the myxovirus resistance A protein, which is an antiviral protein that is induced by interferon.

Genetic variant that makes you immune to the norovirus and rotavirus:

Genetic variants that protect against the flu:

Influenza – the flu – can be caused by several different strains of the virus. It tends to change and trend with different strains going around periodically. Interestingly, studies show that the majority of people exposed to a new flu strain don’t get the flu – they remain asymptomatic.[ref]

The H3N2 strain has been prevalent for the past few years. Genetic variants in the cytokine-producing interleukin genes have been found to alter people’s susceptibility to the flu. These variants don’t completely protect you from getting the flu -just statistically make it less likely that you will come down with it. You still need to take the usual precautions against the flu… complications from the flu kill a lot of people each year.[ref]

The IL-1β gene codes for interleukin-1 beta, an inflammatory cytokine important in the immune response.

The IL-28 gene codes for interleukin-28.

The TNF gene codes for the TNF-alpha cytokine, which is important in the immune response.

The CD55 gene codes for a protein that protects cells from complement attack.[ref]

The CCR5 gene (chemokine receptor type 5) codes for a protein on the cell membrane.

The TLR3 gene codes for a part of the body’s pattern recognition response.

The IFIH1 gene codes for an interferon-induced component that is critical for the body’s response to RNA viruses. IFIH1 is also known as MDA5.

COVID-19 Studies Related to Genetics
An annotated list of the preprints and studies that are related to SARS-CoV2 (COVID-19) and genetics.

Blood type and Coronavirus Susceptibility
Blood type may influence the statistical risk of COVID-19 in a population. Learn more about how blood type is linked to various disease risk and dig into the science of how it could influence coronavirus risk.

Are you a non-secretor?
Your genes control the species of bacteria that live in your gut microbiome. And your gut microbiome can help defend against — or make you vulnerable to — diseases.  People who are non-secretors of their blood type due to a FUT2 variant are protected from getting the norovirus and rotavirus.