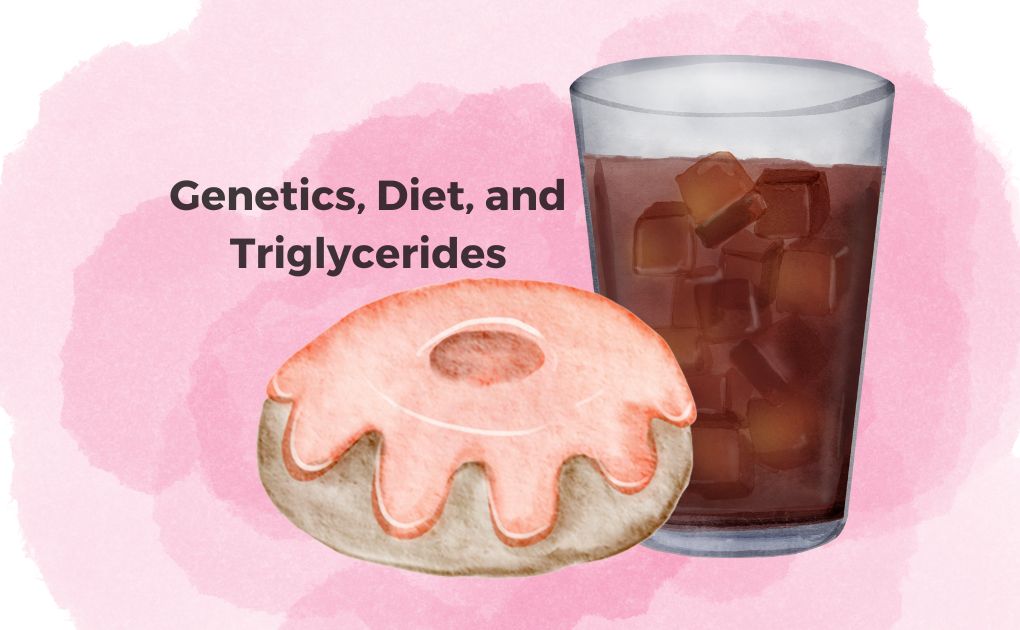 Triglycerides are the main type of fat in your blood. Triglyceride is a general term for a type of lipid-containing three fatty acids (tri) bound to a glycerol. Most importantly, triglycerides are used by the body as energy and are stored in adipocytes (fat cells that compose adipose tissue).

Most of the time when you go to the doctor for a lipids test they are worried about higher LDL or lower HDL levels. These are classically linked to cardiovascular disease risk.  However, triglycerides also play a causal role in heart disease.[ref]

The immediate response to ‘why do I have high triglycerides’ is to blame the diet and assume you are eating donuts and drinking lots of soda. While diet does play a role (of course), your genetic variants are also very important in basal triglyceride levels.

Triglycerides from food cannot be directly absorbed. Instead, they are emulsified by lipase, an enzyme secreted by the pancreas, to break down fats. In the enterocytes ( an intestinal cell that absorbs) of the small intestines, the fatty acids from triglycerides are packaged into chylomicrons (like a glob of fat). Picture how oil clumps together into droplets when you try to stir it into water.

Chylomicrons contain mostly triglycerides along with a smaller percentage of cholesterol, phospholipids, and proteins. They are secreted into the lymphatic system first, so they don’t initially go through the liver’s first amino acids and sugars.

To convert mg/dl triglyceride levels into mmol/L, multiply by .01129.

In studies, hypertriglyceridemia is usually defined as being higher than 150 mg/dl or higher than 2 mmol/L (175mg/dl). About 25% of adults in the US meet this criterion.[ref][ref] Other studies call levels from 150-999 mg/dl mild to moderate hypertriglyceridemia. Levels over 1,000 mg/dl are severe and can cause pancreatitis.[ref]

High triglycerides are linked to atherosclerosis and stroke. Is this a big increase in risk? That is a hard question to quantify since every study seems to have different endpoints and biases.
Here are some study results:

Several studies show that high fructose intake increases triglycerides. As a result, this may lead you to assume that drinking the periodic soda is causing your high triglycerides…

A study using normal-weight adults looked at the difference between consuming 150g/d of fructose or 150 g/day of glucose for 4 weeks.  They did this by substituting the fructose or glucose for other calories in the diet, so overall calories weren’t affected. After 4 weeks, there was no increase in visceral fat, muscle fat, or liver fat and no changes to blood pressure. The only change after 4 weeks was that triglycerides in the fructose group went up by 35 mg/dl (still in the normal range, though). There was no change in triglycerides in the glucose group.[ref]

Studies in humans where fructose is added on top of their normal caloric intake do show a larger increase in triglyceride. One study that added fructose for a 35% increase in calories showed triglyceride levels rising 75%.[ref] But it is hard to differentiate between suddenly adding that many calories vs. those calories being from fructose.[ref]

A meta-analysis concluded there is no difference in triglyceride levels from fructose vs sucrose vs glucose.[ref]

Leptin is the hormone that signals to the brain that you are full and don’t need to eat.  In people who are overweight or obese, there is usually a high level of leptin, but that signal isn’t being received in the brain (leptin resistance). The question is ‘why?’…  For example, one theory is elevated triglyceride levels interact with leptin in the brain, causing leptin resistance.

Theoretically, it makes sense that in times of starvation, high triglycerides would block the leptin signal, driving people to need more food. But in our modern epidemic of metabolic syndrome and high triglyceride levels, this is causing leptin resistance and increasing the desire to eat even when overweight.

High triglyceride levels usually correspond to lower HDL levels.  Certainly, this is part of what makes research on cardiovascular disease risk and triglycerides difficult — is it the low HDL or high triglycerides that cause the increase in risk?[ref – open access]

The APOA5 gene codes for apolipoprotein A5, a lipoprotein involved in triglyceride levels, possibly through activating lipoprotein lipase (LPL).

The lipoprotein lipase (LPL) enzyme releases fatty acids to be used as fuel. It does this by hydrolyzing the triglycerides in plasma lipoproteins. Genetic variants that decrease this enzyme can raise triglyceride levels.

The APOE E4 variant is also tied to a risk of increased triglyceride levels.  If you want to know your APOE status, read through the article on Alzheimer’s disease and APOE.

What are we missing here?  Rare mutations…

Here are a few mutations covered in 23andMe or AncestryDNA.  But this is just the tip of the iceberg for rare variants that could have a large impact on high triglycerides. What does ‘rare’ mean — usually that the mutation is found in less than 1 in 1000 people.

If you have high triglycerides, carrying some of the variants (above) that raise your triglyceride levels is part of the problem. The other half of the equation is diet and lifestyle.

Even more noteworthy, a (small) study showed that the ketogenic diet, which is a low carbohydrate diet, reduced triglyceride levels fairly significantly.[ref]

The Mediterranean diet, consisting of plenty of fresh fruits, vegetables, and fish, reduced triglycerides (a little) in a clinical trial.[ref]