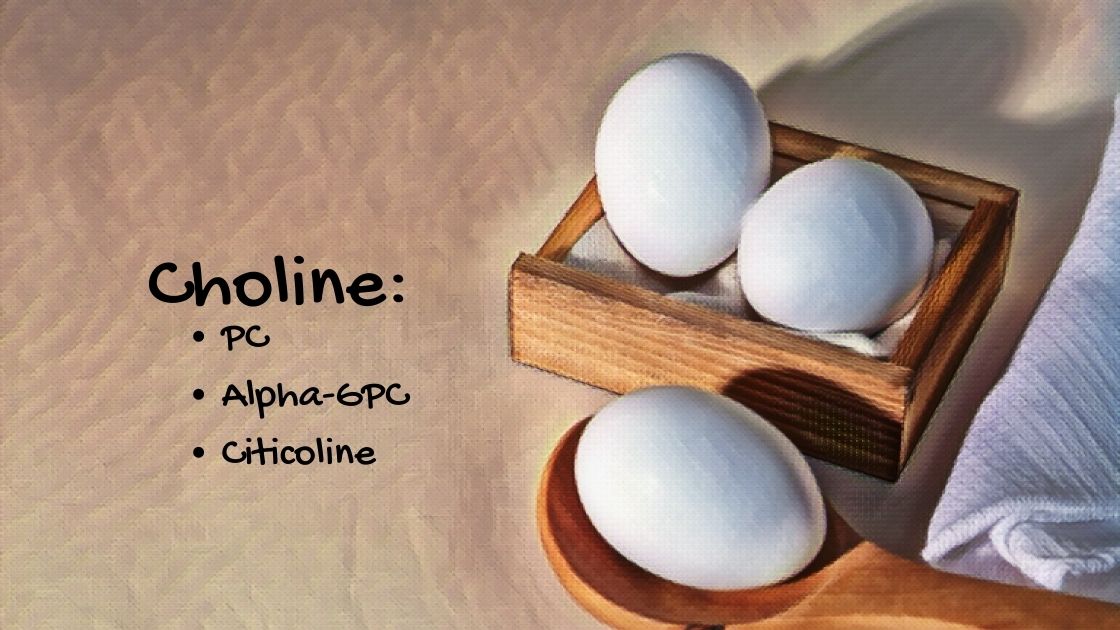 Choline is an essential nutrient that your body uses in several important ways. “Essential”, in this case, means that you have to get it from the foods you eat.

Many of us don’t get enough choline in our diets, and simply our intake of choline-rich foods can help with a variety of health issues.

However, some of us want to take optimizing brain function to the next level… The question then becomes how much choline to take and which sort of choline to take to improve your cognitive performance.

Choline: from nootropics to gut health

Choline is a vitamin-like nutrient; it’s incorporated and used in every cell of your body. Like many essential biological processes, there are redundant pathways for ensuring choline is available. But without choline in the diet, these synthesis pathways can’t keep up. Choline deficiency can cause everything from cognitive problems to fatty liver disease.

What do the different types of choline do in the body?

Choline is absorbed in different forms from your diet and converts into the following forms.[ref]

Tradeoffs to consider: Choline is necessary in the right amount. Not enough choline impacts cognitive function, reproduction, and liver function. Too much choline, though, can interact with the gut microbiome to produce a choline-derived metabolite (TMAO), which is linked to an increased risk of heart disease.[ref]

Making choline endogenously (in the body):

Humans can make choline endogenously but not at sufficient levels to meet all of our needs. This is why choline is considered an essential nutrient — we need to get at least part of our daily requirement from foods.

In the liver, the PEMT enzyme can convert phophatidylethanolamine into phosphatidylcholine (PC) with the addition of a methyl group.

Choline creation in the body depends both on having enough of the PEMT enzyme (genetics) as well as sufficient methyl groups (diet, genetics) along with methionine (amino acid, abundant in high protein foods).

Here’s an overview of the biochemical pathways for choline creation. The genes involved are in rectangular boxes.

The daily recommended adequate intake of choline is 550 mg for men and 425mg for women.

The AI for choline may not be enough for everyone, though. In one study, some men developed signs of liver damage when restricted to only 550 mg/day of choline.[ref] Other studies point to genetic variants and ancestry as impacting the dietary requirement for choline.[ref]

The Choline Information Council states that 90% of people in the US are choline deficient.

How quickly can you run out of choline?

A research study in the early 90s had healthy male volunteers eat a diet containing no choline for three weeks along with adequate, but not excess, methionine. (The liver can make some choline with methionine.) The results showed “plasma choline and phosphatidylcholine concentrations decreased an average of 30% during the 3-wk period when a choline-deficient diet was ingested”. Liver enzyme tests showed that there were signs of liver dysfunction beginning.[ref]

A follow-up study was done with both men and women on a low-choline (50 mg/day) diet. The study lasted either 42 days or until signs of organ failure, whichever came first!

The results showed that men and postmenopausal women were more likely to have organ damage faster than premenopausal women, indicating that estrogen may play a role in how the body prioritizes choline creation.[ref]

Indeed, later research shows that an estrogen response element directly affects PEMT expression.[ref] Thus, women who are premenopausal induce PEMT and create choline at higher levels. This is likely due to choline being essential in reproduction. It protects the fetus if the mother’s diet lacks choline, often faced by our ancestors who may have had seasonal deficiencies.

Choline as a nootropic:

When you look at supplemental choline products, such as citicoline or Alpha-GPC, you’ll find that some are marketed as nootropics that supposedly increase focus and memory. Sounds great, but how does this work?

When looking at changes in the brain from choline, researchers use animal models to trace what is happening.

My takeaway: For people who don’t get enough choline in their diets (90% of the population), either citicoline or alpha-GPC may help a bit with memory and focus.

The scoop on TMAO:

I mentioned above that the drawback to higher choline intake is the creation of TMAO.

Trimethylamine N-oxide (TMAO) is a molecule generated by gut bacteria in the intestines from choline, betaine, and carnitine.

Recently, a bunch of studies have been published that correlate high TMAO levels to heart disease and possibly neurological disorders. But correlation isn’t the same as causation, so do you need to worry about TMAO?

Let’s look at how TMAO is made…

In the gut, bacteria can turn choline, betaine, L-carnitine, ergothioneine (from mushrooms), and other choline-containing compounds into trimethylamine N-oxide (TMA). Additionally, TMA and TMAO can be found in fish.

TMA from food and gut bacteria is rapidly absorbed in the intestines and travels to the liver. The FMO3 enzyme converts TMA to TMAO.

Factors influencing TMAO formation include age, diet, and the gut microbiome. TMAO levels tend to increase as we age. FMO3 activity is impacted by diet, with Brassica vegetables, such as cabbage or broccoli, decreasing FMO3 and thus TMAO. The gut microbiome, of course, affects TMA production, and the amount of fiber in the diet can alter the gut microbiome.[ref]

In general, older people and people who eat a typical, high-fat Western diet have higher levels of TMAO. And are more likely to have atherosclerosis and heart disease.

Genetic studies also show that diabetes and kidney disease-related genetic variants may be causing the increase in TMAO, further confounding the correlation between TMAO and cardiovascular disease.[ref]

On the other hand, animal studies show a link between TMAO and heart-related tests. In mice, TMAO levels correlated with heart dysfunction. Moreover, blocking the formation of TMAO while keeping the same diet prevented cardiac dysfunction.[ref]

While there is still a lot of research needed here, to err on the side of caution, you likely want to avoid TMAO being high.

Genetic variants can impact how well your body can synthesize choline from methionine as well as how well it can convert between forms of choline.

The MTHFD1 gene codes for the enzyme called methylenetetrahydrofolate dehydrogenase, cyclohydrolase, and formyltetrahydrofolate synthetase 1. This enzyme is in the folate pathway, but it affects your need for adequate choline in the diet.

MTHFD1 will impact your body’s ability to create phosphatidylcholine.

The PEMT gene codes for the enzyme phosphatidylethanolamine N-methyltransferase, which is essential for the production of choline in the body. Using SAMe as a methyl donor, PEMT catalyzes the reaction to triple methylate PE to form phosphatidylcholine.[ref]

The rs12325817 SNP may make the PEMT gene less responsive to upregulation by estrogen in premenopausal women. Thus, getting plenty of choline from dietary sources is extremely important in pregnant women or trying to get pregnant.[ref]  Keep in mind that this is based only on one research study with a small number of participants. So instead of relying on genetics here, if you are pregnant or planning to get pregnant, ensure that you’re getting plenty of choline, no matter whether your genetics indicate you are more resilient or more at risk.

This gene encodes a transport protein that moves choline across the cellular and mitochondrial membrane.

The CHKA gene codes for the choline kinase alpha enzyme, which is involved in the CDP-choline pathway of reactions that convert choline into phosphatidylcholine (needed for cell membranes). Choline kinase specifically is the catalyst in the reaction that converts choline into O-phosphocholine. The variant below decreases the turnover of dietary methionine into choline. Carriers of the variant are more likely to need dietary choline since they don’t convert dietary protein (methionine) into choline very well.

The PCYT1A gene encodes an enzyme used to convert CDP-choline (citicoline) into phosphatidylcholine.

The BHMT gene codes for the Betaine-homocysteine S-methyltransferase enzyme. This enzyme is used to convert homocysteine using a methyl group from choline (betaine).

The FMO3 gene codes for the flavin-containing monooxygenase 3 enzyme, which is an important liver enzyme for breaking down a number of substances. It is important in the conversion of TMAO, a substance that is implicated in atherosclerosis.

All of this information about how the body uses choline is great, but I bet you are now wondering “how do I use it?”.

With 90% of people in the US not meeting the minimal intake of choline, you may be wondering if everyone needs a choline supplement.

Foods high in choline include:

First, figure out how much choline you consume on average. Cronometer.com is a free web app for tracking micro and macronutrients. Choline isn’t included in the standard view, but you can go into the settings and include it. Track your food for a few days and see what you consume. For example, if you’re eating liver regularly, you are likely getting enough choline, but for liver-haters, it can be tough.

Another study looked at betaine supplementation vs. betaine and/or choline from foods. All increased choline levels and decreased homocysteine.[ref]

Testing: If you have concerns about heart disease and are worried that choline will make it worse, you could get a TMAO test done to know your current levels. If you are seeing a cardiologist, they may order the test for you. If not, you can order one yourself for around $100. UltaLab Tests is one place to order the test, but you’ll have to get a blood draw done somewhere. Check around for the best prices when ordering lab tests online – test prices vary a lot, and most ordering sites offer coupons and sales. For example, UltaLab Tests usually has a coupon on the home page.

Resveratrol: A clinical trial shows that a polyphenol formula with resveratrol decreased TMAO levels by 62% in 4 weeks.[ref]

Upper limit of choline: Large doses of choline not only can increase TMAO, but it can also result in a fishy, odd-smelling body odor. The tolerable upper intake level for choline is set at 3,500 mg/day for adults.[ref]

Types of choline supplements include:

Things to consider when choosing supplemental choline include the conversion to TMAO, the absorption and utilization, and the source. Many phosphatidylcholine supplements are made from soy, which some people want to avoid.

The rest of this article is for Genetic Lifehacks members only.  Consider joining today to read about the types of choline supplements, supplement stacks that use choline, high-choline foods, and a recap of your genetic data with supplement options.

Ancestral Diet: Omega-3 and Omega-6 Fatty Acids Impact the FADS1 gene
We all vary in how well we convert plant-based omega-3 oils into the DHA and EPA that our bodies need. Some are poor converters and should either eat more fish or consider taking a DHA / EPA supplement. Learn more about how your variants might affect your health.

Specialized Pro-resolving Mediators: Getting Rid of Chronic Inflammation
Chronic inflammation is at the root of all diseases. New research discusses how pro-resolving mediators are the key to the resolution of inflammation.