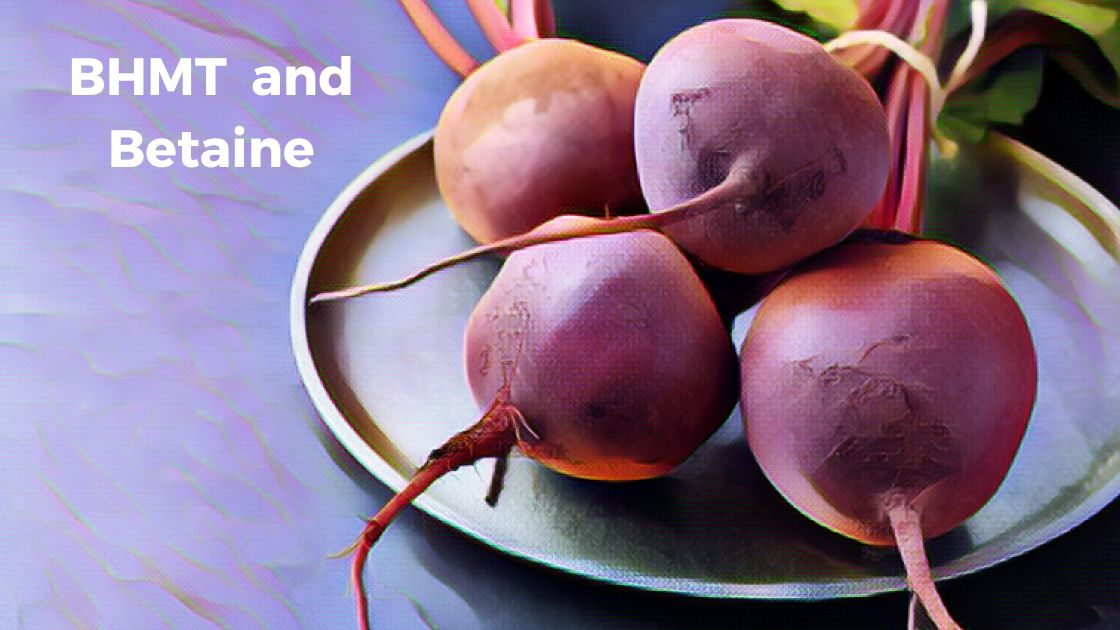 The methylation cycle is an essential pathway for producing methyl groups, which are used by the body in a billion reactions. One role of methylation is to metabolize homocysteine, which is an amino acid that is a risk factor for heart disease.

This article explains the role of BHMT in the methylation cycle and how genetic variants can impact your need for certain nutrients. Members will see their genotype report below, plus additional solutions in the Lifehacks section. Consider joining today.

What does the BHMT enzyme do?

BHMT (betaine homocysteine S-methyltransferase) helps cells to convert homocysteine into methionine. It is an enzyme found mainly in the liver.

The reaction catalyzed by BHMT:

To sum up:
In the liver, the BHMT enzyme methylates homocysteine in order to produce the needed methionine. This not only helps to keep homocysteine at an appropriate level but also produces a vital amino acid (methionine).[ref]

Understanding the role of BHMT in the methylation cycle

As I mentioned above, the BHMT enzyme involves one way that the body converts homocysteine back to methionine. Another way that cells do this is by using the enzyme methionine synthase.

Within the methylation cycle, MTHFR gene variants limit methyl groups produced in the folate cycle. This is linked to higher homocysteine levels in some people due to not enough methionine synthase being available to convert homocysteine back to methionine.

The BHMT enzyme can step into that gap — but not in people with genetic variants that decrease the enzyme function.

What happens when there are problems in the methylation cycle?

Neural tube defects are a type of birth defect that can occur when there are not enough methyl groups available during pregnancy. This is why folic acid is added to prenatal vitamins and some processed foods in many countries.

Consuming enough folate-rich foods matters a lot. Cancer rates, such as for breast cancer, increase with low folate – either through genetic variants impacting the methylation cycle or through poor diet. Many of the genetic variants only have links to an increase in the risk of cancer for people who don’t eat enough folate and/or choline.[ref][ref]

While the body has several ways of metabolizing homocysteine, BHMT is important here. In the liver, BHMT is responsible for about half of homocysteine metabolism.[ref]

High homocysteine is a marker associated with elevated heart disease risk. A number of genetic variants in the methylation cycle genes have links to higher homocysteine levels as well as heart disease.[ref] The increase in risk can be reduced through the right dietary intake of folate and other B vitamins.[ref]

Members: Log in to see your data below.
Not a member? Join here. Membership lets you see your data right in each article and also gives you access to the members-only information in the Lifehacks sections.

The following SNP (rs3733890 ) is the best research genetic variant in BHMT, with many studies showing that it has an impact on enzyme function:

These variants may have a more minor impact on BHMT function:

Folate & MTHFR
The MTHFR gene codes for a key enzyme in the folate cycle. MTHFR variants can decrease the conversion to methyl folate.