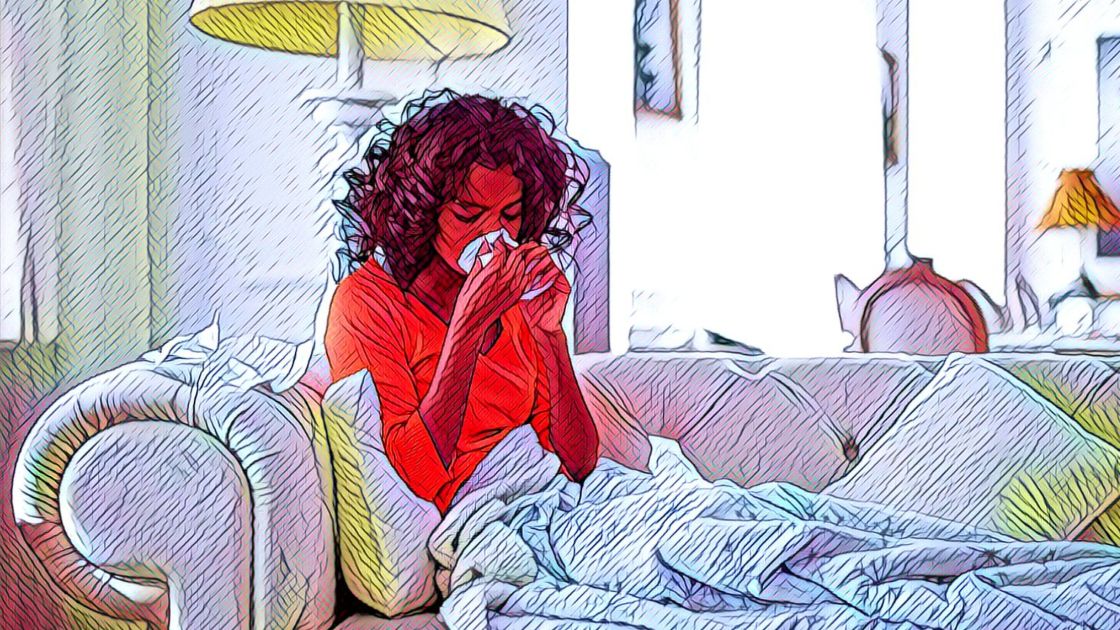 Key takeaways:
~ Not everyone gets the flu when exposed to it.
~ Genetic variants can decrease your susceptibility to specific strains.

Have you ever wondered why some people never seem to get the flu when it is going around? Turns out that our genes play a role in both our immune response to the flu virus and the virus’s ability to replicate in us.

No one wants to get the flu. You feel terrible for a week or so, and the fatigue sometimes lingers even longer.

But have you ever noticed that some people never seem to get the flu?

It turns out that genetically, some people are protected against different variants of the influenza viruses.

Influenza – the flu – can be caused by several different strains of the virus. Usually, there is an influenza A (H3N2 or H1N1) and a strain of influenza B that circulates each year. The specific strains change each year.[ref]

Interestingly, studies show that the majority of people exposed to a new flu strain don’t get the flu – they remain asymptomatic.[ref]

The flu virus invades the epithelial cells that line your upper respiratory tract – nose, sinuses, pharynx, and larynx. Once the virus enters the cell, it is replicated by the host cell (your) RNA replication mechanisms. The new viral proteins reassemble and then are taken to the cell surface to be released.[ref]

Your immune system kicks into high gear to fight off the foreign viral proteins.

Genetic variants in the cytokine-producing interleukin genes have been found to alter people’s susceptibility to the flu.

When the immune system recognizes the foreign viral particles through pattern recognition receptors, it activates production of pro-inflammatory cytokines and chemokines, including IL-1β (interleukin 1 beta).

These variants don’t completely protect you from getting the flu -just statistically make it less likely that you will come down with it. You still need to take the usual precautions against the flu… complications from the flu kill a lot of people each year.[ref]

Keep in mind that even if you are at half the normal risk, you can still get the flu if you are exposed to it, especially if you have a compromised immune system.

Another part of your innate immune response is the complement system. The complement system proteins circulate in an inactive state and are triggered by certain microbes. Activation of this system then stimulates other parts of the immune system to kick into high gear.

Certain genetic variants in the complement system are linked to susceptibility to H1N1 flu strains.[ref]

CCR5 gene:
The CCR5 gene codes for a protein on the surface of white blood cells. CCR5 is a chemokine receptor involved in our immune response. People who carry the CCR5delta32 variant are more resistant to HIV infection.

The CCR5delta32 variant has also been investigated in H1N1 flu cases. Several studies have found a link to susceptibility and increased severity of flu symptoms for people who carry the variant.[ref][ref] But not all studies agree.[ref]

CD55 gene:
The CD55 gene codes for the complement decay-accelerating factor, which regulates the complement system on immune cells. A variant of CD55 has been associated with the severity of H1N1 infection.[ref]

Tamiflu
Every year about 3 to 5 million people get the flu, and this results in about 250,000 to 500,000 deaths worldwide. One common prescription medication for the flu is Tamiflu, also known as oseltamivir. There are a couple of genetic variants that influence the way that oseltamivir works.

Zinc genes: The healing power of zinc
Important for immune health, zinc is a mineral making headlines these days. Learn why zinc is important for your immune system and so much more. Find out how your genes impact your need for zinc and discover ways of boosting your zinc status.