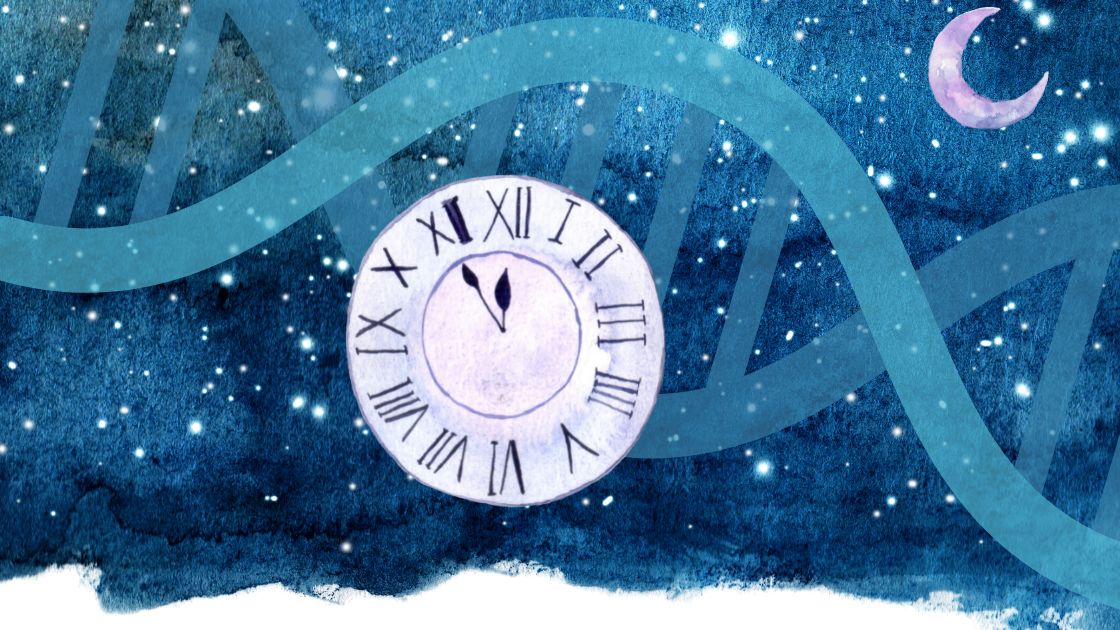 When it comes to chronic diseases, the “Big 3” are heart disease, cancer, and type 2 diabetes. Heart disease is the number one killer in the US, with cancer a close second. Diabetes numbers are increasing at an alarming rate.

Genetically, one gene connects all three of these chronic diseases. BMAL1 is one of the core circadian clock genes, and lifestyle factors, along with genetic variants, are important here. We will dive into the science of circadian rhythm to understand why these genetic variants are important for health and longevity. Members will see their genotype report below, plus additional solutions in the Lifehacks section. Join today.

One pair of proteins, CLOCK and BMAL1,  influence biological activities during the daytime.

Another pair governs the night half of the rhythm (PER and CRY).

Circadian rhythm biology is not just unique to humans – plants, all animals, and even some bacteria have similar circadian genes. It makes sense that your body can turn on processes that are needed when you are active (e.g., digestive enzymes, immune system genes) and then turn them off at night.

When it comes to the circadian clock genes, researchers like to use terminology like ‘period’ and ‘amplitude’. Let’s take BMAL1 as an example: the levels will rise and then fall (amplitude) over the course of 24 hours (period).

It is easier to picture this if you visualize the amount of BMAL1 rising and falling like a sine wave:

Quite a lot of your body’s processes rise and fall over the course of the day. In fact, researchers estimate that 20 – 43% of genes are following a circadian pattern.

These circadian rhythms are obvious when you think about our natural sleep/wake cycle. Other biological rhythms include cortisol levels, body temperature, and blood pressure.

Blood pressure also follows a natural rhythm over the course of a 24-hour day, dipping by about 10% at night.[ref] Dipping at night is important, and people with high blood pressure often lose that oscillation.

A recent animal study sheds some light on why BMAL1 is so important in heart disease. The study found that reducing BMAL1 in heart muscle cells directly affects the mitochondria (the powerhouse of the cell). Without good mitochondrial function, the heart muscle cells can’t function optimally, eventually leading to “compromised heart function and dilated cardiomyopathy”. [ref]

BMAL1 gene variants have been tied to both increased[ref][ref] and decreased risk of cancer[ref], depending on the variant and type of cancer.

To find out how BMAL1 influences cancer, researchers investigated what happens when BMAL1 is deleted in a cell. The study found that in some types of cancer cells, deleting BMAL1 increased invasive cancer, but in other cells, it triggered apoptosis which killed the cancer cell.[ref]

Several circadian genetic variants have been found to increase the risk of type 2 diabetes. Some, like melatonin receptor variants, influence insulin release and lead to insulin resistance for those who eat too late at night.

In the pancreas, cells called beta cells are responsible for creating and secreting insulin needed for shuttling glucose into all of the cells of the body.  Without enough beta cells, the pancreas has a hard time producing enough insulin.  BMAL1 is involved in pancreatic beta-cell proliferation as well as the regulation of adipogenesis (fat cell creation).[ref]

The BMAL1 protein is coded for by the ARNTL gene.

Blue-blocking Glasses: Why? Which ones?
Optimizing circadian rhythm starts by blocking out light in the blue wavelengths at night. Let me convince you with some dazzling science, and then I’ll explain what some of your options are for blue-blocking glasses.