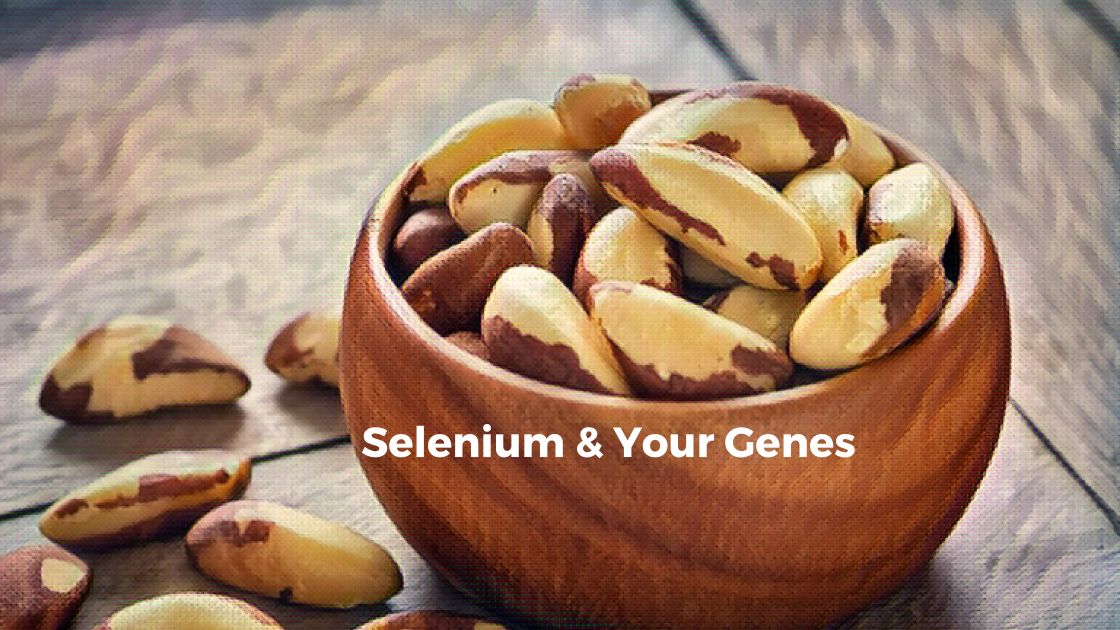 As a trace element, selenium is found in certain foods and reflects the amount of selenium found in the soil where the food is grown. Some areas, such as New Zealand, have low-selenium soil and, subsequently, higher levels of selenium deficiency in the population. Other areas, such as certain regions in China, have high selenium levels, which can cause selenium toxicity.[ref]

This article digs into how selenium is used in the body, why it is important, and how genetic variants can make someone more susceptible to problems with a selenium-deficient diet.  Members will see their genotype report below, plus additional solutions in the Lifehacks section. Join today.

Selenoproteins: Using selenium in your cells

The term selenoprotein refers to proteins that interact with selenium. The role of these proteins can be broken down as:

The transport of selenium throughout the body and into cells is important, and it varies a bit due to genetic differences.

The antioxidant usage of selenium is essential for healthy cells. Glutathione peroxidase 1 (GPX1) is used in cells to reduce pro-oxidants, such as hydrogen peroxide. Excessive pro-oxidants can cause cell damage or DNA damage.

The glutathione peroxidase 4 (GXP4) protein includes selenium and is essential for reducing lipid oxidation in cells with oxidative stress. This impacts downstream inflammatory processes, including IL-1 and COX2 (cyclooxygenase).[ref]

How much selenium do you need?

The average selenium intake per day in European countries is between 30 – 60 μg/day. The US RDA is 55 μg/day. Other countries have different standards, ranging from 40 – 85μg/day.[ref] Why the wide range? I don’t know…

Getting more than 400 μg/day of selenium can cause toxicity.[ref]

Selenium is essential to the production of antioxidants:

Oxygen is vital to life, but it is also a very reactive molecule. So the body tightly regulates oxidants – producing antioxidant compounds inside your cells to counteract pro-oxidants.

High levels of pro-oxidants, or ROS, cause oxidative stress in cells. This can lead to DNA damage, possibly causing cancerous mutations. It is essential to have the right balance of oxidants in the cell, and selenoproteins are an important part of the balance.[ref]

In general, increasing the intake of selenium has been shown to increase the activity of glutathione peroxidase 1 (GPx1), an important antioxidant.[ref] Don’t go overboard on selenium, though – read the section on toxicity before supplementing.

Keshan cardiomyopathy is one disease caused by selenium deficiency. This disease causes insufficient cardiac output, resulting in an enlarged heart.[ref]

People with Keshan cardiomyopathy have low selenium concentrations in their blood, causing a lower amount of glutathione peroxidase 1.[ref] Keshan’s disease is named for a region in China where selenium deficiency is very common.

Another disease associated with selenium deficiency is Kashin-Beck disease. The disease causes joint degeneration in children and can cause dwarfism.[ref]

Both of these diseases are thought to result from decreased antioxidants (e.g., glutathione peroxidase) due to low selenium status.

Selenium and the immune system:

When the immune system is fighting off a viral infection, a lot of reactive oxygen species (ROS) are formed. ROS is important in fighting off the virus, but when it overwhelms the body’s ability to neutralize it, oxidative stress in the cell results.

More recently, research shows that SARS-CoV-2 also increases ROS and interacts with selenoproteins.[ref] Selenium (along with other vitamins and minerals) is important in the body’s viral response.

Additionally, some viruses interact with the selenoproteins (glutathione peroxidase and thioredoxin reductase), reducing the amount of these proteins. Thus, it can be a double-whammy of needing more antioxidants to deal with ROS and simultaneously having reduced selenoproteins.

Sufficient selenium is also essential for preventing viral replication of certain viruses, such as the coxsackie virus and influenza.[ref]

A recent article in the journal Medical Hypothesis explains that sodium selenite, a specific form of selenium, may help to stop the replication of coronaviruses.[ref]

While iodine is perhaps the best-known cofactor micronutrient for the thyroid, selenium is also important.

Selenium is essential for creating the DIO1 and DIO2 enzymes, which convert between the active and storage forms of thyroid hormones.[ref]

Additionally, selenium in the antioxidant system, especially GPX1, is important in protecting against oxidative stress in the thyroid itself. Hashimoto’s, an autoimmune cause of hypothyroidism, is linked to low selenium.[ref]

Several studies have shown that low selenium status is often found in people with higher BMI. For example, a study in Spain found that overweight children were likely to have serum selenium levels that are 14% lower than normal-weight children. Not all studies agree, though, and there are likely other factors at play also (such as thyroid function).[ref]

More is not always better!

When it comes to selenium, more is not better. Instead, having selenium levels in the middle of the normal range is usually best.

Similarly, men with low or high selenium levels are at an increased risk of prostate cancer.[ref]

Here is the variation in selenium across US states (USGS map):

In general, foods that are higher in selenium include Brazil nuts, organ meats such as kidney and liver, cod, salmon, mustard, egg whites, and whole wheat (dependent on soil).[ref]

For animal foods, such as chicken, the selenium content depends on what the animal is eating. For example, selenium is added to poultry feed in some countries.[ref] Judging by the map above, grass-fed beef from the Dakotas or Montana is likely to have more selenium than cattle grazing in New Mexico or Arizona. Most people today eat foods grown in a range of locations, so having a varied diet may help to protect them from selenium deficiency.

Gene-diet interaction: Genetic variants in the selenoproteins could make you more susceptible to negative outcomes with low selenium levels. These variants could make it more important for you to ensure that you are getting plenty of selenium in your diet.

Some of the studies on selenoproteins point to these variants having no impact on people who have higher selenium levels.[ref]

SEPP1 gene: encodes the selenoprotein P, which is a transporter of selenium from the liver to the rest of the body.

SELENOS gene: encodes selenoprotein S, which protects the endoplasmatic reticulum from stress due to misfolded proteins

GPX4 gene: glutathione protein that depends on selenium as a cofactor. GPX4 is important in reducing oxidized lipids in the cell membrane.

Avoiding toxicants: Selenium is essential in protecting from oxidative stress. Animal studies show that low selenium may not be all that detrimental when the cells aren’t stressed out. Avoiding toxicants that cause oxidative stress is one way to spare your selenium levels. For example, the pesticide paraquat is much more lethal in animals that are selenium deficient.[ref][ref] Glyphosate, the main ingredient in the herbicide Roundup, may also decrease your selenoproteins.[ref]

How to avoid toxicants is the million-dollar question…Eating organic when available may help some. Pesticides around the house and on your pets may also be an important route of exposure. If you live near an agricultural area, drinking water contamination can be a big problem, especially in areas where aerial spraying is common.[ref]

Test first: I would highly recommend getting a blood test done first to make sure that you are deficient in selenium before supplementing. Selenium is toxic if you go overboard. Talk with your doctor about getting selenium testing done. If you live in the US, you can order the test yourself through places like Ulta Lab Tests ($54 serum, or part of a micronutrients panel). Shop around on lab tests online – the prices vary a lot.

Member’s Blueprint: Next Steps and Experiments

Viruses: Are you susceptible to the coronavirus, flu, and more
Your genetic variants shape your immune system and give you superpowers against some pathogens – and perhaps more susceptible to others.

Detoxification: Phase I and Phase II Metabolism
Your body metabolizes (breaks down) the foreign substances that come into it – and then gets rid of it. This is usually a two or three-stage process.

Thyroid Hormone Levels and Your Genes
Your genes play a big role in how well your thyroid works and how your body produces and converts the different forms of thyroid hormone. Genetic variants can impact your risk for hypothyroidism, Hashimoto’s, and Graves’ disease.