Your body has an amazing capacity to rid itself of harmful substances through detoxification pathways.

Many people have genetic variants that impact how medications and toxicants are broken down and eliminated.

Understanding where you have a genetic sensitivity — and then optimizing to avoid specific toxicants or drugs — is the key here.

First, let me explain how phase I and phase II detoxification work. Then I’ll link to full articles on important genetic variants in these pathways. These articles can help you understand how your body eliminates specific substances, such as prescription drugs and pesticide residue.

What are detoxification pathways?

Your body metabolizes (breaks down) the foreign substances that come into it – and then gets rid of it. This is usually a two or three stage process.

In a nutshell, substances need to be water soluble to be eliminated via feces and urine, and the goal of ‘detox’ is to get rid of substances that your body doesn’t want.

Phase I breaks apart big toxins and makes them into polar molecules. This breaking apart is called metabolism, and the substance that is formed is called a metabolite.

Phase II binds something to the metabolite from Phase I and makes it water soluble and easily excretable.

Some researchers include a third phase to the process – the elimination of the Phase II products (urine, feces, sweat). 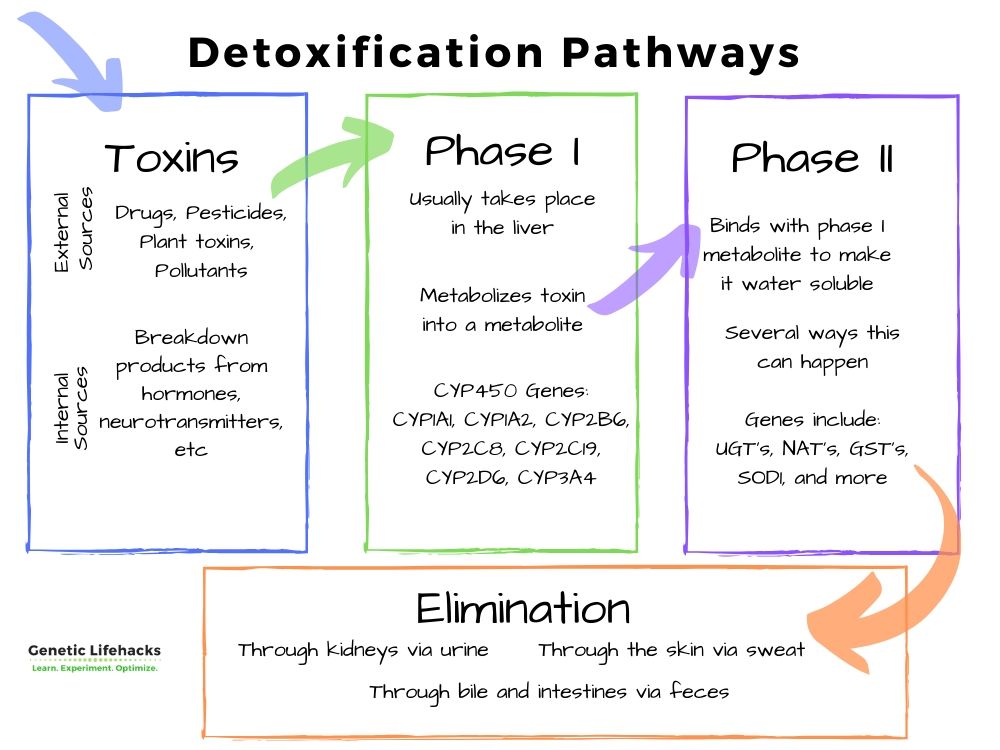 How does phase I and phase II metabolism apply to medications or drugs?

Doctors often say “try this medication and see how it works for you”.  Knowing how your genes work, you can know what is more likely to work and you can understand why a specific medication gives you side effects.

The rate at which a medication is metabolized affects how your body will react to that drug:

Some medications are designed so that the metabolite – the substance created after phase I metabolism – is actually the active drug. These types of medications are called prodrugs.

Note: While your data from 23andMe or AncestryDNA can give you part of the picture on medication metabolism, for a better understanding of your drug metabolism issues, your doctor may recommend getting a clinical-grade test done (pharmacogenetic testing).

In addition to genetics, your gut microbiome can also impact medication efficacy and side effects.[ref]

A lot of toxicants – whether eaten, breathed, or created in our bodies – are broken down by the Cytochrome P450 (CYP450) family of enzymes in phase I detoxification. Much of this takes place in the liver, which is the body’s main organ for detoxification.

Quick science explanation: The  CYP450 enzymes have iron and oxygen in them, and through a redox reaction can make a drug or toxicant more polar. These metabolite molecules then pass through phase II detoxification to become even more hydrophilic (water-loving) so that they can easily be eliminated. The goal is to create molecules that can easily be gotten rid of by the body (urine, feces, sweat).

The following articles list the genetic variants related to phase I detoxification of toxicants, medications, and substances produced within the body.  Read through the article and check your genetic data.

Members: If you’re a Genetic Lifehacks member, the place to start is the Detoxification Topic Report. This report shows you which CYP variants you carry so that you can jump to the articles relevant to you

Phase II  detoxification involves taking the metabolites of phase I and modifying them so that they can be easily excreted.

Sometimes the metabolites of phase I are carcinogenic or reactive, so having phase II detox in sync is very important. You want to have fast and efficient phase II detoxification.

The following articles explain your genetic susceptibility variants related to phase II detoxification as well as what you can do to avoid problems here.

After a toxin passes through Phase II, it needs to be excreted from the body.  Some are processed through the kidneys and out through urine; others go through the intestines and out.

Bile acids are important in the process, as is proper kidney function.

You can promote elimination by staying hydrated (peeing it out) and by normal bowel movements (pooping regularly).

Additionally, some substances can be eliminated through sweat, so a sauna can be beneficial for elimination.

With all of these routes of elimination, getting enough water each day  is important.

In addition to the above, the following articles look at specific toxicants and their detoxification pathways:

MTHFR and Folate:
Learn how your genes impact your need for folate. The methylation cycle relies on folate, which then impacts the detoxification of certain substances.

COMT and Supplement Interactions:
In addition to the Phase I and Phase II detoxification reactions, the COMT enzyme is affected by many popular supplements. Check your COMT variants to see if there are supplements you should be careful with.