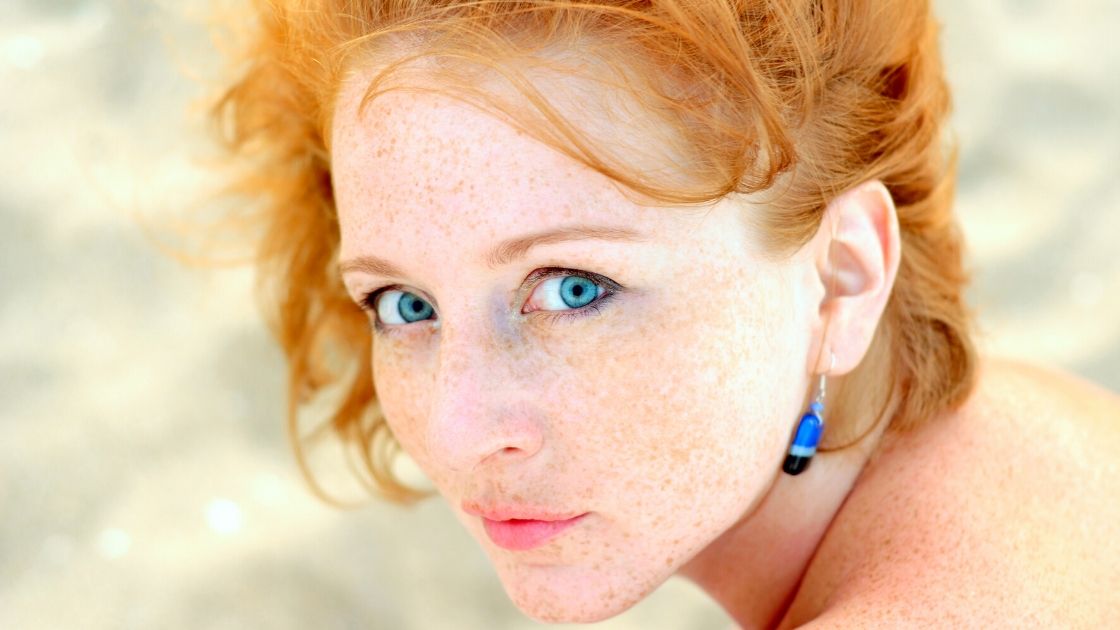 I remember in high school learning about Punnet squares; people with dark hair had the dominant hair color gene and red hair gene was recessive. It turns out it isn’t nearly as simple as having a red hair gene or a brown hair gene. (Nor is there a blue eye gene or a short gene…)  Instead, certain variants in the MC1R gene control the red pigmentation in the hair.

The genetic variant that causes red shades of hair impacts other aspects of our health as well.  Carrying the variant can cause an increased risk of melanoma as well as possibly impacting the way you respond to certain analgesics.

There are two types of pigments for hair color: eumelanin and pheomelanin.

The MC1R (melanocortin-1 receptor) gene controls how much melanin vs pheomelanin is produced in the skin and hair.  Genetic variants of MC1R produce different amounts of pheomelanin, with increased pheomelanin causing red hair and skin to be more photosensitive.

The variant forms of MC1R are also thought to not activate DNA repair as well as the more common MC1R form.  This leads to higher rates of mutations in the DNA of skin cells, possibly leading to skin cancer.[ref]

The link to melanoma is well established for the common MC1R variants that cause red hair, but what people may not realize is that carrying one copy of the variant also doubles the risk of melanoma.[ref]

Freckles and moles are genetic:

The MC1R gene is also linked to freckles and more moles on the skin.[ref] Additionally, one MC1R variant (rs1805008) has also been tied to an increased risk of Parkinson’s disease.[ref]

MC1R isn’t just a human-specific gene; it causes pigmentation variation in animals from chickens to goats to carp. It is also thought to be involved in the browning reaction of cut apples being exposed to air.

Beyond the ‘red hair’ gene, predicting hair color from genetic data can be tricky.  Here is a great article on 124 genes that influence hair color.

Additionally, a lot of men who carry one copy of the MC1R variant may notice that their beard hair is reddish, especially in the sunlight. The Irish call this a ‘gingerbeard’.

Genetic variants of the MC1R gene:

Note that people who are compound heterozygous – carrying one copy of the variant in two different spots – can also have red hair. Additionally, less common MC1R mutations are not included in 23andMe or AncestryDNA data but can cause red hair.

Common sense dictates watching your sun exposure and avoiding a sunburn if you carry one of the risk variants listed above for melanoma.

While you need a certain amount of sun for vitamin D production, knowing when to cover up or put on sunscreen is important. In other words – avoid staying in the sun to the point that your skin starts to turn pink.

While everyone thinks about hats as a way to decrease sun exposure, there are also new lightweight fabric shirts that are made for keeping cool while blocking UV radiation.

Kappa-opioid analgesics may act differently in women with red hair. If you are needing analgesics (pain medication) before a surgery or dental procedure, you may want to talk with your doctor about whether you will need more pain relief. Research has shown that people with red hair often need a higher dose to relieve pain – depending on the type of analgesic used. [ref]

Fisetin: Antioxidant and Senolytic
Aging brings with it a myriad of health issues including an increased risk of diabetes, heart disease, cancer, and neurodegenerative diseases. A supplement that can mitigate the root cause of some of these age-related conditions is a very alluring idea. But does the research back it up?

How to use your genetic data for biohacking
Biohacking is a term that is usually applied to optimizing health by utilizing tools such as supplements, peptides, biofeedback, photobiomodulation, transcranial magnetic stimulation… and more! One more tool to add to that biohacking toolbox is utilizing your genetic data. You can easily use your genes to determine which biohacks are more likely to be effective for you.