There are several key players in our body’s regulation of hunger, satiety, and energy expenditure. Two pivotal hormones involved in appetite are leptin and ghrelin. Within that leptin pathway, another key regulator of our body weight is MC4R.

This explanation is going to get a bit complicated, so for all of you impatient people:  Jump ahead to check your genes for MC4R variants.  Be sure to check out the solutions in the Lifehacks section, including the link to mold.

The arcuate nucleus is a region within the hypothalamus in our brain. This cluster of nerve cells has several important functions including controlling appetite.

After you have eaten, your body releases the satiety hormone, leptin. 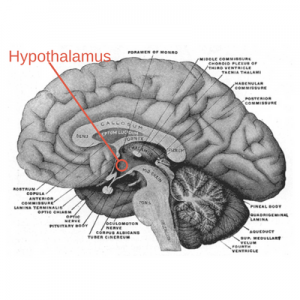 Later, when the leptin levels fall, ghrelin or the hunger hormone is released signaling you to eat.

Along that leptin signaling pathway is the MC4R receptor, which is part of transmitting the signal into the neuronal cells.

So the normal way things work is that you eat, you’re full for a while, and then your body signals that you should eat again.

Why, then, would anyone eat more than their body needs? Along the way, that natural cascade of reactions can go awry in several ways: leptin receptor gene variants cause the signal from leptin not to be heard; ghrelin, the hunger hormone, can be increased; or within the hypothalamus, the melanocortin-4 receptors (MC4R) can be genetically impaired. (Yes, there are many other players here as well. One interesting example is a mother’s diet can play an epigenetic role in obesity in their offspring: Agouti mouse study.)

There are hundreds of research studies on the genetic variants of MC4R, and most of the variants studied show a decrease in MC4R, resulting in increased BMI.  If there aren’t enough of the receptors generated by the cell, then the ‘stop eating’ signal can be impaired. Thyroid hormone levels also play a role in the production of MC4R.[ref]

Digging a little deeper, the melanocortin-4 receptor (MC4R gene) is a receptor that binds to a hormone called α-MSH, which is a melanocyte-stimulating hormone. α-MSH binding to the MC4R receptor gets the ‘full signal’ through. Another molecule called the agouti-signaling peptide also can bind to the MC4R receptor, blocking it from binding with α-MSH. The agouti-signaling peptide can be thought of as an ‘off switch’, with α-MSH being the ‘on switch’.

MC4R deficiency is not only tied to increased appetite and higher BMI throughout life but also tied to a greater muscle mass as well. In my mind, the term ‘big-boned’ leaps to mind, which is backed up by studies showing the relation to bone mass, fat mass, and the MC4R variants.[ref][ref]

Previously, I mentioned that some MC4R variants are tied to higher BMI throughout life. A study looked at infants carrying the MC4R variant and found no differences in birth weight based on the variant, but by 2 weeks of age, they could detect a difference in BMI and appetite.[ref]

An interesting aside: α-MSH does more than just bind to the MC4R receptor and moderate feeding, it also stimulates the production of pigment (melanin) in the hair and skin. Named for the agouti coloring of animal coats, the agouti-related peptide also plays a role in pigmentation. The α-MSH is derived from the POMC hormone, which is a pituitary gland hormone that is the precursor to ACTH and other MSH’s.  There are other melanocortin-receptors as well: MC1R is the receptor controlling hair color, with genetic variants of MC1R producing red hair.

Members: Log in to see your data below.
Not a member? Join now.
Below are some of the better studied MC4R variants along with a few of the studies about them.  There are quite a few additional studies, so please do more research if you are interested in this topic. This is a well-studied gene with solid links to increased BMI.

Keep in mind that, as with most genetic variants, the variants listed below do not necessarily mean that a person will become obese. Everyone has lots of different genetic variants that interact differently with diet and environment. Epigenetics, the turning off and on of genes, also plays a role here.

MC4R variants that keep you lean:

What do you do if you are overweight and carry the MC4R variants?
That seems to be the million-dollar question – quite literally, for the pharmaceutical company that figures out the answer.  There is, of course, great interest in finding a way to increase the activation of the receptor.

Do you wonder why other people don’t seem to struggle with wanting to eat more? Ever wished your body could just naturally know that it has had enough food — and turn off the desire to eat? It could be that you carry a genetic variant in the leptin receptor gene which is linked to not feeling as full or satisfied by your meal.

Is Intermittent Fasting Right for You?

There are many internet docs and nutritional gurus promoting fasting as a way to lose weight and get healthy. There are some real, science-based benefits to fasting. But is it right for you? Your genes may hold the answers.