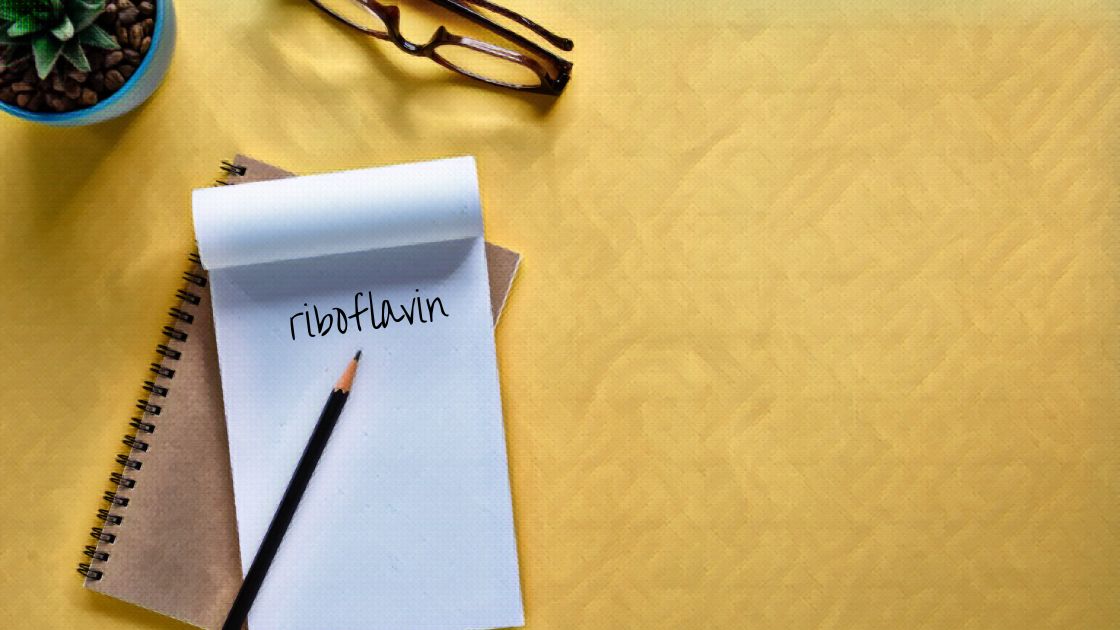 Riboflavin (vitamin B2) is a water-soluble vitamin that is a cofactor for many enzymes in the body. It is vital for energy production in the mitochondria and is also a key component of your body’s detoxification system.

This article explains how your body uses riboflavin and the genetic variants that increase your need for riboflavin. Interestingly, research shows that riboflavin is incredibly important for people with MTHFR variants.

What is riboflavin and why is it important?

Riboflavin, also known as vitamin B2, is synthesized from a ribose sugar bound to a flavin molecule. Thus the name ribo-flavin.

This is an essential vitamin for many important cellular functions. Riboflavin is the precursor to FMN (flavin mononucleotide) and FAD (flavin adenine dinucleotide), which are coenzymes involved in numerous vital functions in our bodies.

FAD is an essential component of the electron transport chain, which is how your body produces energy in the mitochondria.

Within the mitochondria, FAD and FMN are also integral to activating the various enzymes that protect cells from oxidative stress, thus making adequate riboflavin essential for healthy mitochondria. Conditions that are related to mitochondrial dysfunction and reliant on FAD and FMN include Parkinson’s disease, Alzheimer’s, migraines, Complex I deficiency, Alper’s syndrome, multiple sclerosis, and Kearns Sayre syndrome.[ref]

Riboflavin deficiency can also play a role in mitochondrial dysfunction in the development of cardiovascular problems.[ref]

What are the symptoms of riboflavin deficiency?

A lack of riboflavin can show up as:

Riboflavin deficiency can also cause problems with iron absorption, leading to iron-deficiency anemia.

Who is at risk? People more likely to suffer from riboflavin deficiency include the elderly, women on birth control, vegans, and alcoholics.[article] Breastfeeding women may also need more riboflavin because breast milk contains a lot of riboflavin and FAD.[ref]

For most people eating a balanced diet, a frank riboflavin deficiency is considered rare. Most people meet the recommended daily allowance of 0.9-1.3 mg/day.[ref]

However, there is a difference between not having a severe deficiency and getting an amount that is optimal for your specific needs, taking into account genetics and lifestyle.

Riboflavin absorption from foods and transport:

Riboflavin is found in dairy products, eggs, liver, enriched flour, and in minor amounts in other foods. The US RDA is 1.6mg for adults, and most people are estimated to meet this with their daily food consumption.

Riboflavin is absorbed from foods as they are broken down in the upper part of the small intestines, so people with intestinal disorders that inhibit absorption could have problems with riboflavin deficiency.

Clinical trials are an excellent way to know if a supplement is effective for most people. Genetic variants (below) can also clue you in as to whether you may need more riboflavin than normal.

Migraines:
Numerous studies and clinical trials have investigated high-dose riboflavin supplementation for migraines. While riboflavin may not be a panacea for everyone with migraines, it is inexpensive, non-toxic, safe, and effective for some migraine sufferers. For example, one study found that 400 mg/day of riboflavin cut migraine frequency in half after three months of treatment. (This is better than trial outcomes for many expensive migraine prescription medications and injections that have serious side effects!).[ref][ref][ref]

Eye health:
Riboflavin is also being investigated and used for preventing cataracts.[ref][ref]

Vitamin B2, riboflavin, is a water-soluble vitamin. There is no known toxicity for taking too much riboflavin and no upper limit set in the US.[ref]

Excess riboflavin is excreted out through the kidneys and makes your pee yellow — really yellow.[ref]

Several genetic variants may cause an increased need for riboflavin. You can check your raw genetic data to see if you carry SNPs related to riboflavin deficiency.

Members: Log in to see your data below.
Not a member? Join here. Membership lets you see your data right in each article and also gives you access to the member-only information in the Lifehacks sections.

MTHFR gene: codes for the enzyme needed to convert folate to methylfolate, a key component in the methylation cycle.

Additional research shows that low riboflavin status in women with MTHFR C677T increases the risk of fractures in osteoporosis.[ref][ref]

For those with the A/A genotype and high blood pressure, riboflavin (1.6 mg/day) lowered systolic blood pressure by 5 – 13 mmHg.That is pretty significant…[ref]

FMO3 Gene:
FMO3 (flavin-containing monooxygenase 3) variants can cause a decrease in the FMO3 enzyme, which breaks down certain nitrogen-containing amines and some sulfur-containing compounds. FMO3 is the primary way that the body breaks down trimethylamine. Decreased FMO3 activity can cause an increase in trimethylamine, which causes a fishy-smelling body odor.[ref] Some people with mild FMO3 variants are helped with riboflavin.[ref]
These first four variants are more significant reductions in enzyme activity and are linked to TMAU (fish odor or strong body odor). Note that 23andMe doesn’t cover all the FMO3 variants that decrease the function.

ETFDH Gene:
The electron transport chain is how your body produces most of its energy, in the form of ATP, in the mitochondria of all of your cells. This process is dependent on the FAD molecule, which is a flavin-containing molecule. ETFDH codes for the electron-transferring-flavoprotein dehydrogenase, an enzyme that transfers electrons from FAD within the electron transport chain. There are a few rare mutations that disrupt this enzyme, causing decreased energy production.[ref]

SLC52A3 Gene: (Riboflavin transporter, also known as C20Orf54)
The mutation listed below is possibly pathogenic for Brown-Vialetto-Van Laere, a rare neurological condition that is often normalized by high-dose riboflavin.[ref]

There are two forms of riboflavin in supplements: riboflavin 5′-phosphatate, which is the active form, and just plain riboflavin, which must be converted by the body.

Riboflavin is absorbed in the upper small intestines via a riboflavin transporter. The guide for dietary reference intakes indicates that the body can’t absorb larger amounts of riboflavin at one time. When you take higher doses than your body can absorb, your urine will turn really yellow.

People with alcohol use disorder tend to be deficient in riboflavin… if you drink a lot on a daily basis, you may want to also include B vitamins.

Which foods are high in riboflavin?

If you don’t eat dairy, eggs, or liver, you may want to track your daily riboflavin consumption for a few days to see if you are getting the recommended amount. Cronometer is a free online app that is great for keeping track of nutrients.

Magnesium and Your Genes:
Your need for magnesium may depend, in part, on your genetic variants. Find out how low magnesium levels can impact your health in multiple ways.