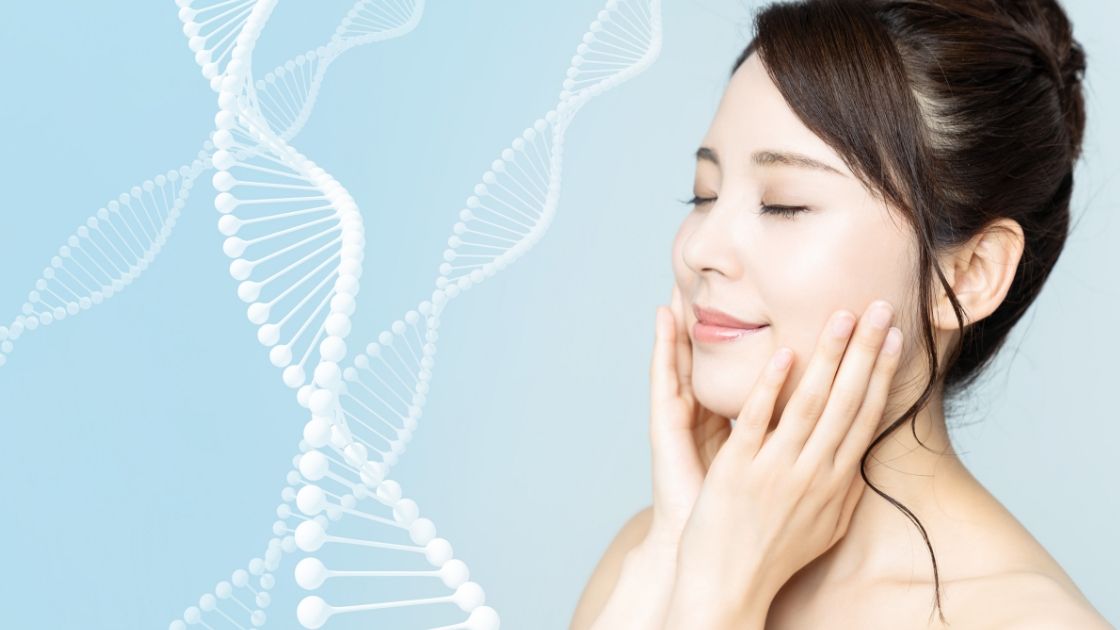 The key to both longevity and cancer prevention lies at the tail end of each strand of your DNA. Telomeres are found on the ends of all of your chromosomes and are comprised of repeated nucleotides (the A, G, and T’s). They cap off the ends of the chromosomes, protecting the nuclear DNA during replication before cell division.[ref]

Lengthened telomeres can lead to cellular regeneration, but this is a double-edged sword that cancer cells can use to their advantage. This article covers the science of telomeres, how they can be lengthened, and how variants in telomere-related genes impact longevity and cancer risk.

Why are telomeres important?

Each time a cell divides, it makes a copy of the nuclear DNA and a little bit of the telomere is lost. When DNA replicates, it gets copied all the way down the long strand, but… it can’t replicate the very end part of the chromosome, where the telomere is located.

Each time DNA is copied, the telomere at the end of the chromosome gets shorter.

Eventually, the telomere shortens so much that it signals the cell to stop dividing. Not enough of the remaining telomere can protect the end of the chromosome from being lost when replicating.

As a result, signals are produced to cause the cell to either be destroyed through apoptosis or to remain senescent. Cellular senescence is a state where a cell can no longer dive and function properly. Normally, the senescent cell will give off inflammatory signals, prompting the body’s immune system to come in and clear out the cell. But as we age, too many senescent cells can overwhelm the body’s ability to get rid of them, which increases the overall inflammatory burden. 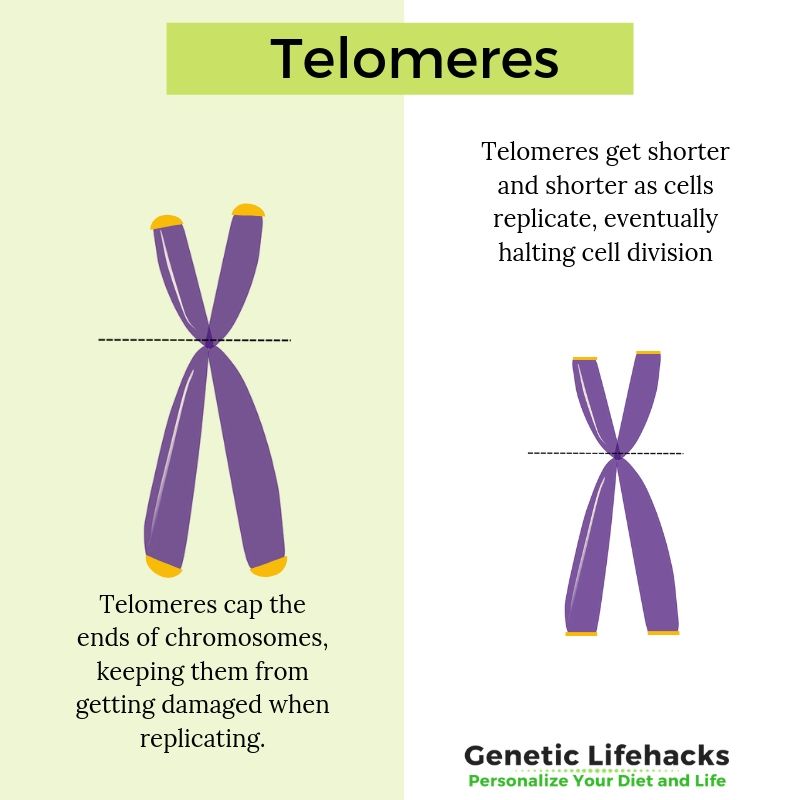 How often do cells divide?

Cells are replicating and dividing all the time in the body. You are constantly losing skin cells and making new ones. The cells in the intestines are constantly dividing and turning over every three to five days. Other cells, like neurons in the brain, generally do not replicate very often (if at all).[ref] [ref]

Take, for example, the cells in the intestines that are dividing all the time… Eventually, the cells reach the point that they can no longer divide because the telomeres are too short. This initiates apoptosis (cell death). Now the stem cells can create new cells that line the crypts in the intestines. [ref]

Can telomeres be lengthened?

The enzyme called telomerase reverse transcriptase is responsible for replenishing telomeres. This process of telomere lengthening happens regularly in stem cells (to some extent) — and in cancer cells (a lot!). Telomerase is also active in lymphocytes (immune system cells) and keratinocytes (skin cells). [ref]

Telomerase adds back nucleotide repeats to the end of the chromosomes, thus replenishing and lengthening telomeres. [ref]

In the body’s regular cells, telomerase is turned off. This causes the replicating cells to have a biological time clock in them — replicate enough times and then cell death occurs. Most cells divide about 50 times, which is known as the Hayflick limit. [ref]

What is cellular senescence?

Cellular senescence is a state where the cell is no longer dividing but doesn’t go through apoptosis. Instead, the cell stays active and actively produces cytokines. Senescence can be a good thing when it comes to tumor cells. It helps to stop the growth and triggers signals so the immune system can remove them.

On the other hand, cellular senescence is also thought to be one reason for the problems seen in aging. Senescent cells give off inflammatory cytokines, increasing inflammation in tissues or organs. These signals given off by the senescent cells can also transform neighboring cells. [ref]

Which diseases are short telomeres associated with?

More specifically, short telomeres and increased atherosclerosis in the carotid arteries are connected. Definitely not a good thing. [ref]

PTSD from sexual assault or childhood trauma (but not combat) is associated with shorter telomere length. [ref]

To sum this up, studies show shortened telomeres associated with:

Can telomerase be increased in cells to prevent aging and neurodegeneration?

There are mouse studies showing that increasing telomerase reduces the effects of aging. Human cell studies show that modifying the mRNA for telomerase can increase telomere length. [ref][ref]

A really cool study showed that turning off the telomerase gene (TERT) caused rapid aging in mice, and then turning back on the gene reversed the aging. [ref] Another mouse study, done in mice bred to be cancer-resistant, found that increasing telomerase extended lifespan by 43%.[ref]

Upregulating telomerase levels in the skin cells of mice resulted in faster wound healing, but the mice were also much more susceptible to skin cancer.[ref] Timing may matter on this, though, since old mice that had telomerase reactivation using gene therapy increased longevity (24%) and didn’t have an increase in cancer. [ref]

So, what is all this about cancer?

There are still a lot of questions to be answered in this field.

On the one hand, shorter telomeres may decrease immune function, increasing the risk of several types of cancer.[ref]

Telomerase is reactivated (turned on) in 90% of cancer cells, leading to the hallmark of limitless growth in the cells.[ref] Mutations in the TERT (telomerase enzyme) gene are commonly found in cancer cells.  These are not inherited mutations, but mutations that happen in cells that become cancerous. [ref]

In general, things that increase cell growth can also increase cancer cell growth. So always keep in mind that telomerase is also involved in cancer growth. When reading about ways to increase telomerase, there could be a balance between decreasing the effects of aging and promoting cancer. [ref] There is still a lot of research to be done on this topic, so a little caution is justified when trying to increase telomerase.

What else does telomerase do?

Telomerase has also been shown to regulate gene expression, and this is an ongoing field of research. [ref]

How can you get your telomeres measured?

Telomeres, in most studies, are measured in leukocytes, which are a type of white blood cell in the immune system.

There are several telomere testing companies now in the US and Europe. I haven’t used any of them, so I can’t comment on how valid the results are (or aren’t).

Do read the privacy policy and ask questions before submitting your sample to a company! In trying to review privacy policies, some companies just use boilerplate policies talking about cookies and never mentioning what they are doing with your data. Also – realize that some companies are signing you up for a supplement subscription along with your telomere test. Other companies may use your ‘survey’ results for research purposes. Look for accreditation and licensing for the lab, also.

Testing the length of telomeres for determining biological age is still fairly new, though. Here is an interesting article that brings up several critical points about the flaws in current direct-to-consumer telomere testing companies: Telomere Testing: Science or Snake Oil

Telomere length is estimated to be 34-82% heritable. This means that genetics plays a pretty big role in telomere length, but that diet and lifestyle factors are also very important. [ref]

Note that the increase in cancer risk from shorter telomeres seems to depend on the type of cancer.

TERT gene: codes for the rate-limiting subunit of the telomerase enzyme that binds with the RNA

TERC gene: codes for the RNA component of the telomere

OBFC1 gene: codes for a component of the telomere binding complex

Natural inhibitors of telomerase are things we often use for health and cancer prevention. Here is a partial list [ref]:

LONGEVITY AND GENETICS: FOXO3, CETP, IGF1, AND MORE
Several genes have been identified as “longevity” genes. The specific variants of these genes present connections to an increased likelihood of living to be 100 or more. And… more importantly, these particular genetic variants show links to a longer ‘healthspan’.

NAD+ REVERSING AGING? OVERVIEW OF NR AND NMN
Nicotinamide riboside (NR) and nicotinamide mononucleotide (NMN) are two supplements that have taken the longevity and anti-aging world by storm. With animal studies showing exciting results including reversal of age-related diseases, these supplements are an exciting glimpse into the future of reversing aging.