It is easy to take for granted the body’s everyday miracles, like blood clotting. It turns out that just a simple little cut causes a hugely complex series of reactions to take place – a cascade of events that quickly seal up a cut in a blood vessel. (Can you imagine the alternative? Literally – death from paper cuts.)

Some people, though, are unique in their ability to form clots more easily. This may have been a superpower in ages past — the whole, not bleeding to death from a sword wound thing. But superpowers have their downsides, and a greater risk of dying from a heart attack, stroke, or pulmonary embolism definitely qualifies as a ‘downside’.

This article covers six different genes and the seven genetic variants that increase the risk of blood clots. It is a timely topic — blood clots seem to be a serious complication for people with COVID-19.

Overview of how blood clots form:

When you get a cut or tear in a blood vessel, the first action that happens is that the platelets flowing through the bloodstream jump into the gap. They seal up the broken blood vessel to prevent too much blood loss. To do so, the platelets link up with the edges of the cut and then with each other.

The final step in clotting is fibrin coming in to shore up the clot. Next, the body starts breaking down the clot through a process called fibrinolysis. It becomes a balance of adding fibrin and breaking it down. 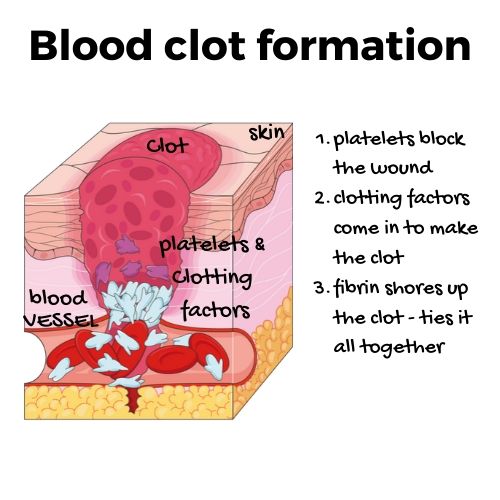 Platelets form from megakaryocyte cells in the bone marrow and lungs. Tiny in size, platelets only survive for 7 to 10 days. These little clot formers have no nucleus (thus, no nuclear DNA). They contain mitochondria, along with granules containing different chemical signals and factors needed for coagulation.

When platelets are zipping around through the body, they are not ‘sticky’. Instead, they are in an inactivated form that allows them to flow freely through your veins.

On the cell membrane of the platelets are receptors that link to collagen. When a blood vessel tears, the platelets bind to the collagen exposed at the site of the rupture. This causes the platelets to change shape, and secrete chemical signals, initiating the coagulation cascade.[ref]

When platelets bind to either collagen or the von Willebrand factor the activation of a signaling cascade occurs releasing granules from the platelets. The release includes fibrinogen, ADP, serotonin, as well as other molecules, and the activation of COX-1 (which is inhibited by aspirin).[ref]

The figure below depicts all of the platelet functions – from coagulation and wound healing to immune functions. Creative Commons Image[ref] 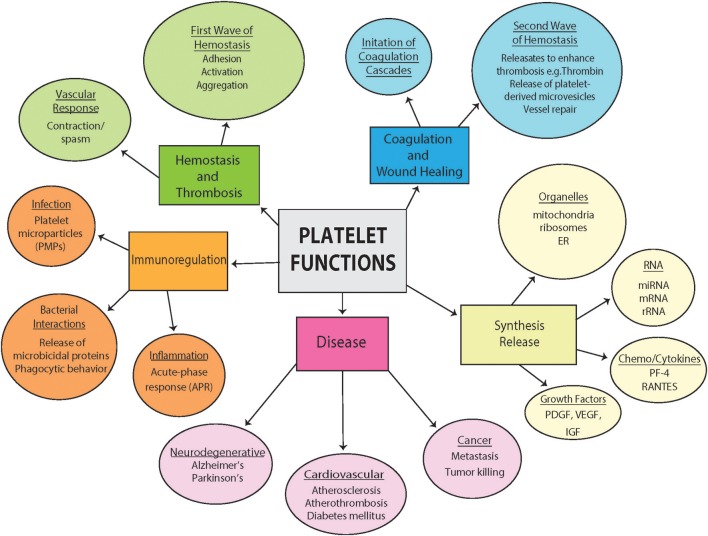 So how many of these little guys are zipping around the body? A healthy adult has between 150,000 and 450,000 platelets per microliter of blood.

Let’s dig a little deeper into the coagulation cascade so that the genetic variants (listed below) involved in increased clotting make a little more sense.  Basically – this is a whole cascade of events that happens quickly and results in the formation of cross-linked fibrin, which forms a mesh to keep the clot together.

The coagulation cascade can be divided into two pathways: the extrinsic and intrinsic pathways[ref]

Finally, all of this results in a fibrin polymer mesh created through the involvement of activated factor XIII. This mesh then holds the clot together, binding the platelets in with the other factors.

After the clot forms, it balances out with the activation of plasminogen, an enzyme that breaks down some of the fibrin in the clot. Basically, there is a balancing act of formation of the clot and breaking down of the clot while the wound heals.

D-dimer releases as clots break down and often measured in the blood to determine if someone has a blood clot.

While it is easy to visualize the blood clotting process when you think of a paper cut on your finger, this same process can take place in blood vessels deep inside you. Instead of a cut, there are a variety of different ‘insults’ to the blood vessel that can cause a clot to form.

So what is the big deal about ‘thrombosis’? Why do we care about blood clotting in a blood vessel?

The majority of heart attacks and about 80% of strokes are caused by blood clots.

Blood clots forming deep in the leg are called deep vein thrombosis (DVT). The clot can block blood from flowing past it, or it could break free and travel through the veins, lodging in the lungs, causing a pulmonary embolism. Anticoagulant medications treat blood clots but come with risks of excess bleeding. In all, the case-fatality rates for DVT and pulmonary embolisms are between 5 and 10% over the course of 30 days.[ref]

Thrombosis due to viral or bacterial infections:

Blood clots can also form due to an infection caused by bacteria or viruses.

This is in the news currently with reports of people getting blood clots due to SARS-CoV2 infections.[ref][ref][ref]

Blood clots, though, aren’t unique to COVID-19. Instead, they are a risk factor in a number of severe infectious diseases including influenza and staph infections. In fact, people with severe complications from the H1N1 strain of the flu were at an 18 to 23-fold greater risk for blood clots.[ref][ref]

When the body actively fights off an infection, a lot of proinflammatory cytokines (IL-6, TNF-alpha, IL-1, IFNγ) release. These cytokines cause both leukocytes (white blood cells) and the surrounding epithelial cells to release procoagulants, such as tissue factors. These procoagulants can tip the body towards too much coagulation, with platelets clumping together. This causes small clots to form, plugging up small blood vessels. The kidneys, liver, lungs, and brain are particularly vulnerable.[ref][ref]

Infection by bacteria or viruses increases the risk of thrombosis by 2 to 20-fold. The risk is greatest when the infection is active – and in the first few weeks after the infection. Complications from clots, such as strokes, are common in the first three days after respiratory infections and urinary tract infections.[ref]

In severe infections, such as sepsis, a condition called disseminated intravascular coagulation (DIC) can occur. DIC causes increased coagulation in the small blood vessels and micro-clots to form in various organs.[ref]

The increased number of clots then causes a depletion of platelets and clotting factors. So, on one hand, you have a lot of little blood clots, but on the other hand, you eventually increase bleeding risk due to the decreased platelets and decreased fibrinogen. This also leads to elevated levels of D-dimer, which releases when the fibrin clots break down.

Genetic variants that increase the risk of blood clots:

Members: See your data belowLog in and select your data file Not a member? Join now.


Unsurprisingly, the genetic variants increasing the risk of blood clots are mainly found in the genes involved in coagulation factors and platelet stickiness.

The F2 gene codes for factor 2, also known as prothrombin. When activated, prothrombin becomes thrombin, which is important in fibrin creation.  The variant listed below is known as G20210A, and is linked to an increased risk of blood clots and strokes.

About 2% of Caucasians carry the G20210A variant, but it is much less common in Asians, Africans, and Native Americans. A meta-analysis of the data from a bunch of studies found that carrying the G20210A variant increased the risk of thromboembolism by 2.6 to 4.4-fold (depending on the location of the clot). The risk of DVT is also greatly increased in carriers of both G20210A and the factor V Leiden (F5 gene, below) variants.[ref]

Factor V, coded for by the F5 gene, is a coagulation protein mainly synthesized in the liver and then circulated through the body.  It is activated in clotting by thrombin and can bind to activated platelets. Just as there is a cascade of events to quickly cause a blood clot to form, there are other molecules involved, such as protein C, in turning off the clotting when it is no longer needed. [ref]

The F5 gene variant, known as factor V Leiden, has links in many studies to an increased risk of deep vein thrombosis and pulmonary embolism. A meta-analysis combined data from 31 studies estimates that the increase in the risk of thrombosis for people carrying one copy of the variant was 4-fold and the increase for those carrying two copies was 11-fold.[ref][ref][ref][ref]

The ITGB3 gene codes for the fibrinogen receptor that is a part of how platelets form clots.

One well studied ITGB3 genetic variant is known as PIA1/A2.  Studies show that people who carry the A2 variant have faster clotting times. It also has links to an increased risk of heart attacks and deep vein thrombosis (blood clots).[ref][ref][ref][ref]

The VWF gene codes for the von Willebrand factor (VWF) needed for platelets to stick to each other. When circulating through the blood, most of the von Willebrand factor is bound to factor VIII (8).  When activated by coagulation factors, the factor VIII releases from VWF and becomes part of the activation of factor X and conversion of prothrombin to thrombin (active form).

Higher levels of VWF and factor VIII are risk factors for blood clotting more easily.[ref] People who have decreased von Willebrand factor, though, tend to bleed more easily and may have easy bruising, nosebleeds, and bleeding gums.

The G6P gene codes for a protein called glycoprotein VI, which plays an important role in the aggregation of platelets. Platelets that stick together too easily can be a problem in coronary artery disease.

Take the information about your blood clot genetic risk factors as a ‘heads up’.

Curcumin is a natural compound found in turmeric. Studies show that it decreases platelet adhesion and has possible beneficial effects for preventing cardiovascular disease.[ref]

Aspirin is a natural blood thinner. Talk with your doctor to see if low-dose aspirin might be a good fit for you.

Maslinic acid, a component of olive pomace oil, has recently shown to downregulate one of the coagulation factors (factor Xa) and decrease platelet aggregation.[ref]

Salidroside, the bioactive component of the herb Rhodiola rosea, has been shown in studies to decrease thrombosis and inhibit platelet function.[ref]

Glycyrrhetinic acid, a component of licorice, directly inhibits factor Xa and is an anticoagulant.[ref]

Non-secretors: Norovirus resistance and gut microbiome
A genetic variant in the FUT2 gene controls whether or not you secrete your blood type into your saliva and other bodily fluids, such as your intestinal mucosa. This alters the gut microbiome – and protects you from Norovirus.