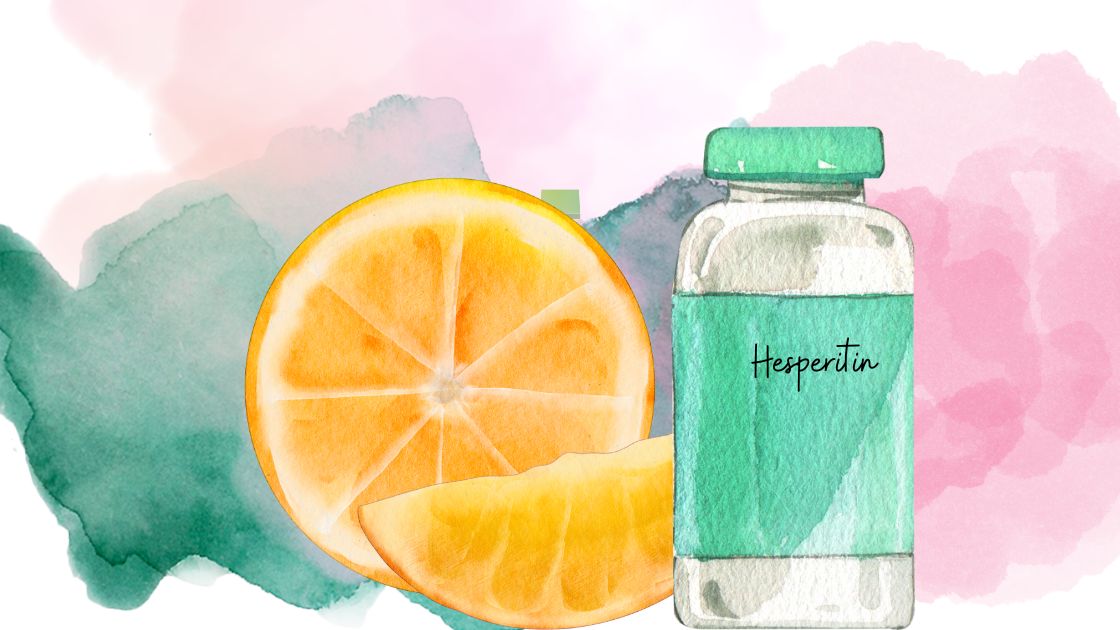 Have you ever woken up to excruciating pain in your big toe or ankle? If so, you may be among the millions of people worldwide with gout. In fact, a study from 2008 showed that about 8.3 million Americans had gout. Men are affected at about 3 times the rate as women.[ref]

This article explains how uric acid is formed and why your genetic variants could increase your risk of gout.

When your body breaks down purines, a type of biological molecule, the eventual byproduct of the process is uric acid. And just like it sounds like – uric acid is a normal part of the urine.

This biological process of breaking down purines and thus creating uric acid occurs for both purines created in the body and due to dietary factors. While it is easy to blame the dietary components (alcohol, fructose, meat, and seafood), the purines produced in the body are a big part of your uric acid levels.

Almost all other mammals go one step further when metabolizing purines, breaking down the uric acid into allantoin. Humans and higher primates don’t make the final enzyme to convert uric acid into allantoin. (Dalmations also have a genetic defect causing them to excrete uric acid instead of allantoin.) Researchers theorize that uric acid is important in humans and possibly takes the place of ascorbic acid (which humans and higher primates also don’t produce). Uric acid acts as a potent antioxidant in the serum, but can act as a pro-oxidant at certain levels and inside cells.[ref][ref]

Purines are a class of biological molecules that include the nucleotides adenine and guanine – the A’s and G’s in your DNA. You naturally have some cells in the body that are broken down each day. Cellular turnover is high in certain tissues (like the intestines and skin) and low in other tissues (like the brain) – but the net effect is that your body breaks down cellular components, including DNA and RNA, all the time.

Guanine and adenine are broken down through a multistep process that eventually creates xanthine, which is acted on by the enzyme xanthine oxidase to form uric acid. (This is important in how gout drugs work.) 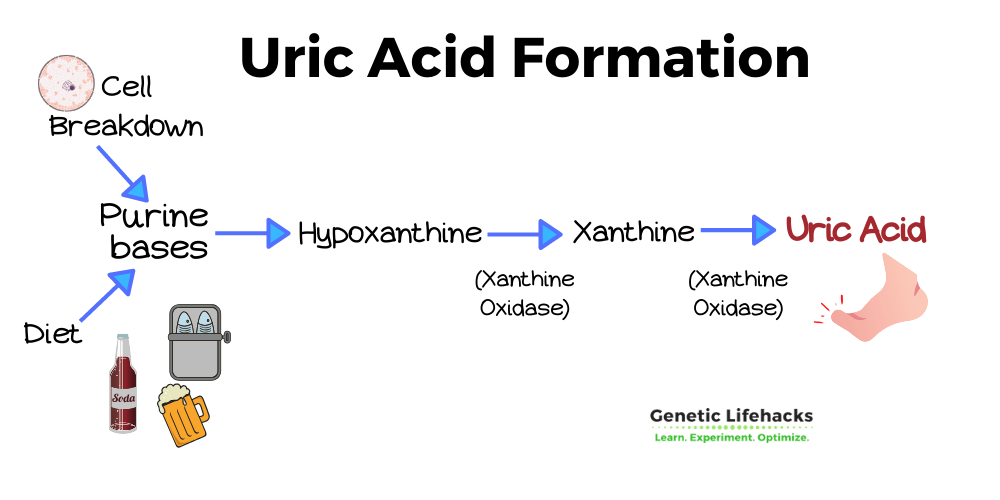 The levels of uric acid in the body are primarily due to a person’s rate of turnover of cells as well as the rate of excretion and reabsorption in the kidneys.[ref]

In addition to someone’s natural rate of uric acid production and excretion, the following can influence uric acid levels:

Overproduction vs. Under Excretion:

There are two ways of looking at high uric acid levels:

The third phenotype here is a combination of both creating too much uric acid along with not excreting enough.[ref]

Figuring out which genetic variants you carry that impact these pathways may help you determine the best method of decreasing uric acid levels – personalized for you.

The kidneys excrete the majority of uric acid and are the regulators of uric acid levels in the body. They control the balance by reabsorbing uric acid using the urate transporter 1 (SLC22A12 gene) and glucose transporter 9 (SLC2A9 gene).[ref]

How high is too high? Serum uric acid level:

Lab ranges may vary a bit on uric acid regarding what is considered normal vs. high. Basically, there comes a point when crystals will form when the concentration of uric acid gets too high.

The normal reference range for uric acid is:

In blood, uric acid crystals start to form at 6.8 mg/dL.[ref]

Normally, about 70% of uric acid is disposed of each day via the kidneys, with the rest being excreted through feces.[ref] High uric acid levels are mainly driven by inefficient renal excretion.[ref]

What exactly is gout?

Gout is a painful, acute arthritis condition caused when crystals of uric acid accumulate in the joints.

Uric acid crystals can also form in the capillaries and skin, but for most people, the first onset of gout is heralded by pain and swelling in the big toe.

Genetics plays a significant role in gout, with heritability estimated at 73% (which is high!).[ref]

Gout occurs with high uric acid levels, but the exact level at which gout occurs varies a lot from person to person.

Getting more detailed:
High uric acid levels for extended periods cause the growth of monosodium urate crystals in and around the joints. These crystals are initially asymptomatic, but they can be seen on ultrasound. The acute episodes of pain are thought to be caused by crystals moving from the cartilage surface into the space in the joint. Ouch! If uric acid remains elevated, the crystals keep forming and periodically move into the joint space – leading to chronic gout, which can damage the joint.[ref]

Another component of gout pain is increased inflammation due to the monosodium urate crystals.

Lifestyle interventions, such as dietary changes, have also been shown to be effective in lowering gout risk. See the Lifehacks section below.

Gout is not a new health problem, although it is increasing. First written about by the ancient Egyptians and by Hippocrates in the 1800s, gout was treated with lithium salts since lithium binds to urate to make it more soluble.

Lithium was (and still is) commonly used in studies when giving test subjects uric acid. In fact, this is how lithium came to be used for bipolar disorder. A psychiatrist in 1949 started treating bipolar patients with lithium carbonate after noticing lab animals were calmer after being treated with lithium plus uric acid.[ref]

Obesity:
Obesity is one co-morbidity occuring at a higher rate in people with higher uric acid. Some studies indicate obesity causes high serum uric acid.[ref] Other studies indicate that high uric acid levels cause an increase in obesity.[ref]

In fact, some researchers theorize that humans found it advantageous to have higher uric acid levels because it promoted fat accumulation, which was helpful for survival throughout history.[ref]

While the complete picture isn’t clear here, obesity combined with higher uric acid levels is also associated with a greater risk of high blood pressure than either condition separately.[ref]

Giving people uric acid, of course, raised their uric acid levels. The test subjects were then given a fast-food-type meal containing 900 calories and 50 grams of fat. The researchers then tested their inflammatory markers at 2-hour intervals. They compared the markers with the same meal given a couple of days later – but with lowered uric acid levels. The results showed high uric acid, combined with the high-fat fast-food meal, causes a significant increase in the inflammatory cytokine IL-6.[ref]

Low uric acid: What does it mean?

Like most things in the body, there seems to be a sweet spot for uric acid – neither too high nor too low. Uric acid does act as a potent antioxidant in the serum, and it is thought to contribute about 60% to the plasma antioxidant capacity in the body.[ref]

Members: Log in to see your data below.
Not a member? Join here. Membership lets you see your data right in each article and also gives you access to the members-only information in the Lifehacks sections.

ABCG2 gene codes for the ATP-binding cassette transporter G2. There are multiple ATP-binding cassette (ABC) transporters in the body, and they generally move substances across the cell membrane. Researchers and drug manufacturers are particularly interested in several of the ABC genetic variants because they can cause medications (including chemotherapy drugs) to be transported back out of a cell.[ref]

The ABCG2 transporter is also most important in the excretion of uric acid in the intestines. Genetic variants that decrease ABCG2 are associated with increased uric acid levels. While the kidneys excrete the majority of uric acid, about a third still gets excreted through the intestines. So decreasing this pathway shifts the burden of excretion to the kidneys.[ref] The genetic variants that impact this pathway may be more of a problem for someone with diminished kidney function (renal disease).[ref]

SLC2A9 gene: Encodes GLUT9, a urate transporter in the kidneys, which is facilitated by glucose and fructose.[ref] Variants here account for part of the variation seen in uric acid levels in a healthy population.[ref]

There are quite a few SLC2A9 variants that are linked to a decreased risk of gout — alternatively, you could consider the more common genotype at a higher risk of gout.

SLC22A12 gene codes for the urate transporter 1 (URAT1), a key player in uric acid reabsorption in the kidneys.

SLC28A2 gene: codes for an intestinal transporter moving dietary purines into the body. Increased uptake of dietary purines could increase the risk for gout, depending on the diet.

Your doctor can order a uric acid blood test if you suspect you have gout.

If, for some reason, you can’t order the test through your doctor, you can order blood tests yourself online in the US through Ulta Lab tests and other online lab test ordering companies. (UltaLabs Tests price – $18) It is also a good option if you are trying different lifestyle interventions and want to track the results.

It is always interesting to see how researchers create an animal model of the human condition. Researchers simply gave rats 10% fructose in their water to create high uric acid levels.[ref]

In humans, there is a strong relationship between the intake of fructose and uric acid levels. When fructose is metabolized in the liver, it is broken down through a multistep process. When too much fructose is consumed at once (e.g., drinking a large soda containing high-fructose corn syrup), one of the components of the metabolism process can build up in the liver. It stimulates purine degradation, which produces uric acid.[ref]

Not all studies agree on the role fructose plays in uric acid –including a large meta-analysis of controlled trials.[ref]

The key may be the amount of fructose consumed at one time, with larger amounts overwhelming the liver.[ref]

Moderating fructose consumption and not consuming larger amounts at one time may be key here.

NLRP3 Inflammasome, Genetics, and Chronic Inflammation
What makes people more susceptible to chronic inflammatory diseases? The root of the over-activation of inflammation for some people could be the NLRP3 inflammasome.

Sudden Cardiac Death and Hypertrophic Cardiomyopathy
Genetic mutations that cause hypertrophic cardiomyopathy can increase the risk of cardiac death.

Familial Mediterranean Fever: Mimics fibromyalgia, arthritis, inflammation
Familial Mediterranean fever (FMF) is a genetic condition of inflammatory episodes that cause painful joints, pain in the abdomen, or pain in the chest. It is most often accompanied by a fever. FMF is often misdiagnosed as various pain-related conditions, such as fibromyalgia, myofascial pain syndrome, or gouty

Chronic Inflammation & Autoimmune Risk: IL17 gene variants
The IL17 gene codes for an important part of the immune system. When it is overactive, IL-17 can contribute to the risk of autoimmune diseases, including rheumatoid arthritis and inflammatory bowel disease.