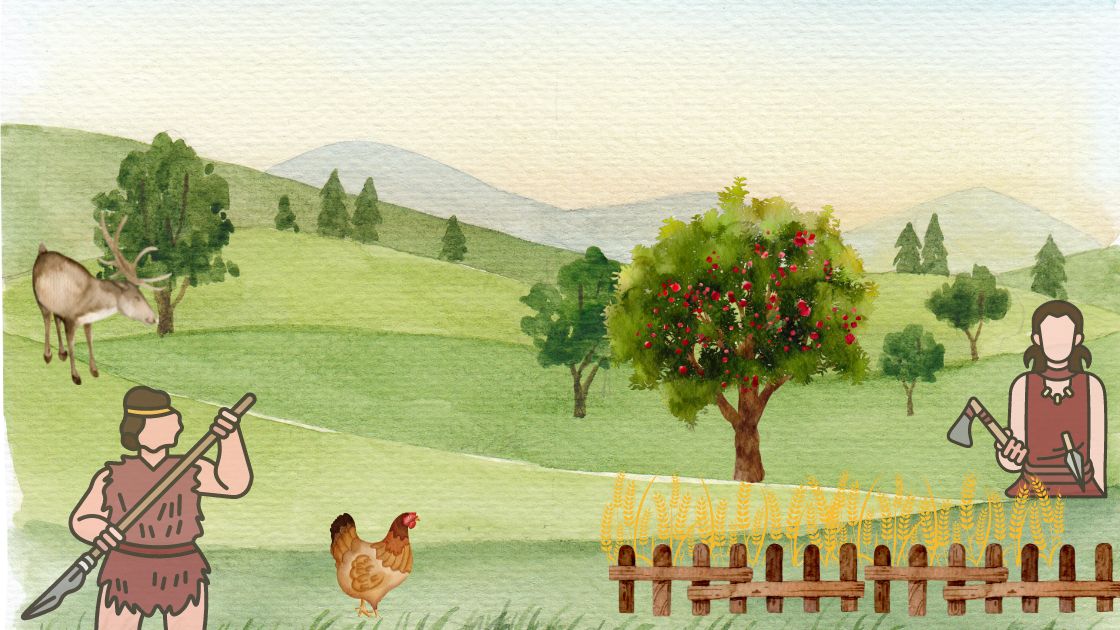 Our ancient ancestors lived much differently than we do today. They were hunter-gatherers, living off of fish, meat, and plant foods that they gathered. A huge shift occurred when those hunter-gatherers began farming, growing grains, and storing them so that food would be available all year.

The ‘ancestral foods’ movement – whether Paleo, low carb, or other diet tribes that eschew grains – likes to paint the picture that we should eat like our ancestors, the hunter-gatherers. It is a narrative that resonates with people. “Why did we start eating all the grains and carbs? Grains are full of carbs that make us fat and lazy…”

This article hits the high points of a new paper explaining a genetic change that took place around the time that agriculture began to take off. The genetic variant influences our ability to utilize more carbohydrates, such as through eating grains.  Members will see their genotype report below, plus additional solutions in the Lifehacks section. Join today.

A research paper published in June 2019 casts an interesting light on how the human genome changed to deal with an increased intake of carbohydrates around the time that many populations shifted to an agriculture-based society. The whole paper is available (open access!) if you want to go read it.

To understand the change that took place, let’s dig into the science of how insulin regulates blood glucose levels.

When you eat something with carbohydrates, the carbs are broken down in the intestines and absorbed as smaller sugar molecules. While there are multiple types of sugar (fructose, lactose, glucose, galactose), I’m going to focus on glucose, which is the simple sugar used by cells for energy.

After eating foods containing carbohydrates, glucose absorption occurs in the intestine. Additionally, the liver makes glucose when it isn’t readily available from foods. Thus, we have a fairly constant supply of glucose on hand, available to all cells, when carbs have been recently consumed. (Low-carb diets and ketosis change this.)

Glucose gets absorbed into the bloodstream and circulates throughout the body. It can be taken into a cell and used in making ATP, which is the molecule the cells use for energy.

For glucose to enter the cell, it needs a receptor protein to be available on the cell surface. Different types of tissue have different glucose receptors. For skeletal muscles and fat cells, this receptor is GLUT4.

Insulin is the signal that brings GLUT4 to the cell’s surface to transport glucose. When blood glucose levels rise, the pancreas releases insulin. The insulin then causes the GLUT4 receptors to come to the cell membrane and transport the glucose into the cell.

Moving GLUT4 into the cell:

The GLUT4 receptor moves back into the cell and remains held there by a clathrin-coated vesicle called CHC22. This is where the hunter-gatherer vs. farmer genetic variant comes into play. The CLTC1 gene codes for the CHC22 protein and researchers found that there is a variant of this gene that causes it to be less effective at holding GLUT4 inside the cell. This, in turn, causes the cells to have more GLUT4 on the cell surface, lowering blood glucose levels when eating more carbohydrates.

The researchers found that this variant in the CLTC1 gene first became prevalent in the genomes of ancient Neolithic farmers. The ancestral version of the gene, exclusively found in the genomes of Neanderthals and Holocene-era hunter-gatherers, isn’t as good at dealing with a high carbohydrate diet.

First, let’s take a minute to acknowledge a cool factor! A bunch of fully sequenced genomes from Neanderthals and ancient hunter-gatherer populations now exist. The researchers who wrote this paper on the CTLC1 gene were also able to look at the genomes of other animal species, tracing the gene and the changes through everything from fish to mice to chimpanzees.

Prevalence of the genetic variant today:

Notably, in human populations today, the CLTC1 variant is fairly well divided up, with almost equal portions of the population carrying either the ancestral hunter-gatherer variant or the newer variant that is better adapted for eating carbohydrates.

This makes sense when you think about it – as a population, we are resilient and able to eat a variety of different diets, which often change from generation to generation depending on the availability of foods. You may have Irish ancestors who thrived on potatoes as well as Norwegian ancestors who survived on fishing. There are dozens of examples today of population groups that survived on specific diets, such as the Inuits in Alaska or the Hadza in Africa.

Caffeine + Carbs
For some people, stacking caffeine with carbohydrates will raise their blood glucose levels more than just carbs alone. Learn whether you carry this genetic combo and what to do about it.

Fish for DHA & EPA
We all vary in how well we convert the plant-based omega-3 oils into the DHA and EPA that our body needs. Some people are really poor at this conversion and thus should either eat more fish or consider taking a DHA / EPA supplement.