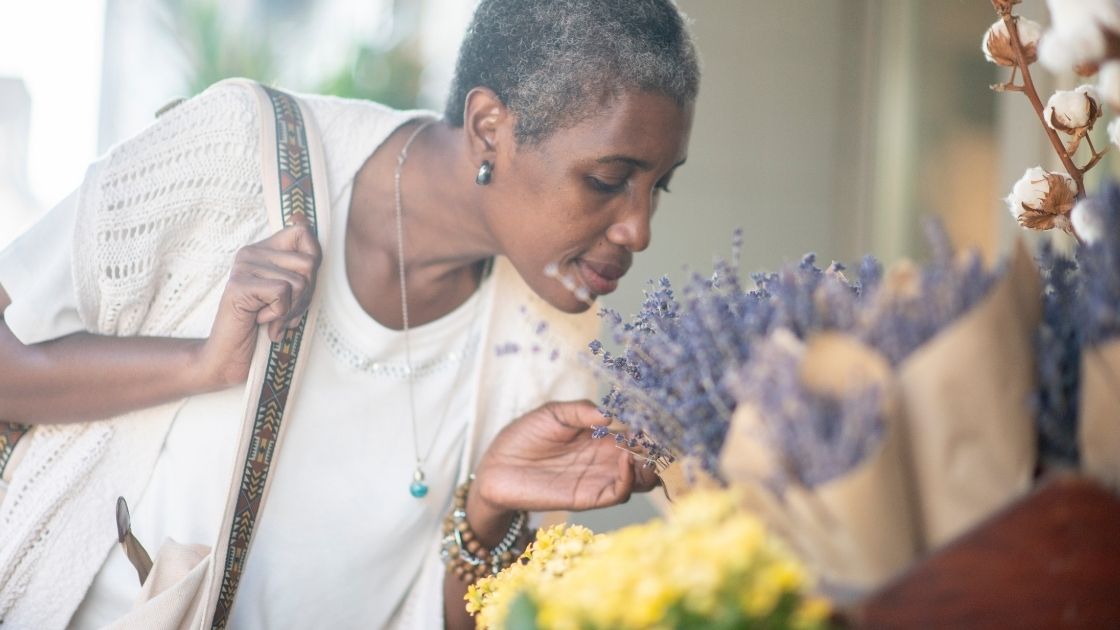 Scenario: You are walking through the grocery store aisle, and it seems as if someone has left a trail of perfume. Thick perfume, heavy on the floral scents… You quickly look around for the offender to your olfactory senses.⁠
⁠
Before you decide to make a comment to the offender, think about this… any two people may have as much as a 30% difference in their functional ability to detect different specific odors.⁠[ref]
⁠
It is possible the odiferous perfume wearer doesn’t smell odors the same way you do because of genetics. ⁠
⁠
This article looks into the genetic variants in the odor receptor genes and how they influence one’s response to their environment.

Humans have around 400+ different olfactory receptor proteins coded for by our genes. So far, only a small portion of these receptors have been mapped to specific odors.

How do odor receptors work?

The olfactory receptor proteins are receptors on the surface of certain cells that can bind with specific molecules. When the odorant molecule binds to the receptor, it triggers actions within the cell, causing signals to be sent to the olfactory center in the brain.

These receptor proteins, located in the airway passages such as the nose, let your brain know that you are smelling something. Most odor receptors can bind to multiple different molecules, and how well the molecules bind give rise to the strength with which you perceive an odor.

As you can imagine, detecting certain odors is vital for determining whether food is edible, whether something is toxic or dangerous, and sexual preference.

Take, for example, an OR7D4 variant, rs5020278, which is linked to a person’s ability to smell the sex steroid-derived odorants, androstenone, and androstadienone.

Researchers have studied how the ability to detect androstenone plays a role in whether a person is likely to eat pork from uncastrated male pigs. Some people perceive the meat as smelling very unfavorable to eat, known as ‘boar taint’.[ref][ref] It turns out that the same odor perception variant can also play a role in sociosexual behaviors in women.[ref]

Other studies have linked odor receptor variants to increased BMI. One study found that participants who were less sensitive to smelling oleic acid, a type of fat, were more likely to eat more nuts, seeds, and nut spreads (high in oleic acid) as well as have a higher BMI. Essentially, a decreased ability to taste that specific fat led to eating more significant amounts of fatty foods. Conversely, the ability to smell the fat was linked to lower BMI.[ref]

Beyond just smelling the flowers…

Recent research shows odor receptors aren’t just limited to the nose. They work as chemical sensors in other parts of the body. For example, sperm cells have at least three different odor receptors on their surface, which may help in chemically detecting the egg cell.[ref]

“Accumulating molecular evidence indicates that the odorant and taste receptors are widely expressed throughout the body and functional beyond the oronasal cavity – with roles including nutrient sensing, autophagy, muscle regeneration, regulation of gut motility, protective airway reflexes, bronchodilation, and respiratory disease. Given this expanding array of actions, the restricted perception of these GPCRs as mere mediators of smell and taste is outdated.”[ref]

A recent (June 2020) study found specific olfactory receptor variants have links to eating habits, such as the number of fruits and vegetables eaten or the likely cups of tea people drink.[ref]

One last tidbit for your olfactory knowledge base is some molecules are transformed in the mucus before reaching the odor receptors. CYP1A2 genetic variants (check yours here) were found to play a role in the conversion of acetophenone (cherry, almond chicory smell) to methyl salicylate (wintergreen smell) in the nose.[ref]

OR5A1 gene:
The variant rs6591536 has been linked to the ability to smell β-ionone. Those who carry a G allele are more able to detect β-ionone, which is a floral smell found in roses, jasmine, violets, and more. It is a compound often used by fragrance manufacturers for floral smells.[ref]

OR10A2 gene:
Cilantro is one of those foods that people either seem to love or hate. It turns out that an olfactory receptor gene variant may play a role in how we perceive it.[ref]

OR7G3 gene:
Being able to smell or not smell certain odors has been linked to food preference and the risk of obesity.  For OR7G3, those carrying the C allele variant had almost a whole point higher BMI on average.

OR7D4 gene: The OR7D4 gene encodes an olfactory receptor that interacts with androstenone, a sweaty odor from a testosterone metabolite. One place that this is important is in the smell associated with non-castrated pigs.[ref]

If you think odor receptors are interesting, check out how taste receptors impact everything from food choices to the ability to detect poisons.

Recap of Your Genes:

ABCC11 gene: Ear wax and no body odor
The ABCC11 gene determines both the type of earwax a person has and their armpit odor. Learn more about how a change in a single spot in the DNA of this gene can cause the gene not to function.