Intriguing Genes: Do you taste what I taste? 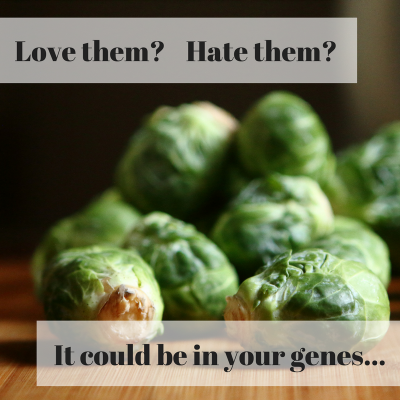 Ever wonder why some people don’t like Brussel sprouts or strong, dark coffee?  I love a good, dark roast, cup of coffee, and Brussel sprouts and cabbage taste great.  It turns out that I can’t taste the bitter compound in them, but the majority of people can. On the other hand, I have yet to find a brand of stevia that I like because of the awful aftertaste. It turns out that I am genetically more sensitive to the bitter taste of steviol.

If you are old enough, you probably remember the Life cereal commercials with Mikey, where the ultimate, picky taste test is whether “Mikey likes it!”  So why is it an advantage to have differences in our taste receptors?  Having part of the population able to taste a bitter toxin and warn of the danger is vital, while also having others who scarf down Brussels sprouts lets the community as a whole know that a bitter, but healthy, food is good to eat.

Here’s a science-y example: One of the substances that some people can detect, at extremely low concentrations, is aristolochic acid, a toxin found in certain plant seeds.  In Eastern Europe, the plant tends to grow as a weed in fields, contaminating crops and causing kidney disease in those who ate the toxin. There is a 50-fold difference in people’s ability to taste aristolochic acid, although researchers are still trying to untangle the effects of taste ability vs the effect of the sensitivity of the gastrointestinal receptors on the disease-causing aspects of the toxin.

We all know that we taste food in our mouth, but it turns out that these same receptors are also found in the gastrointestinal tract, in the airways, and in the urinary tract. New studies are coming out all the time on the various functions that these ‘taste’ receptors perform in the body.[study][study]

Bitter taste receptors:
TAS2R38 gene:
Linked to the taste of bitter in broccoli, Brussels sprouts, cabbage, watercress, chard, ethanol, and PROP. [ref][study]  Interestingly, this taste receptor is also being studied as a target for type 2 diabetes medicines and is involved in triggering the production of bile acids.

TAS2R16 gene:
Associated with the taste of beta-glycorpyranoside [clinvar], which is in ethanol, bearberry, bacteria in spoilt or fermented foods, and willow bark (salicin).  [study]  There have been studies looking into the link between TAS2R16 gene variants and colon cancer, pursuing the idea that either a variation in vegetable intake would affect cancer risk or a variation in the amount of natural salicin compounds eaten would affect colon cancer risk (aspirin being preventative in colon cancer for some). The studies done so far though haven’t been able to make that connection. [study]

TAS2R19 gene:
Linked to the taste of quinine,  the bitter taste of grapefruit and tonic water. [study]

TAS2R14 gene:
Stevia taste receptor — as well as absinthe, aristolochic acid, fishberries, and Hoodia Gordonii.[study] [ref]  There is a polymorphism (rs2234001, covered by AncestryDNA but not 23andMe) that causes some people to detect stevia as bitter, some as only sweet, and some as sweet with a bitter aftertaste.  You don’t really need a genetic test for this one, though, since you can just taste some stevia and know whether you think it is sweet or bitter or both.

Of those who can taste bitter, some have a much strong perception of the bitter taste based on the rs3741843 variant. [study]

TAS1R3
Sweet taste receptor for which variations are estimated to produce about a 16% difference in variability of sweet taste perception.  This receptor also plays a role in umami taste as well, along with another gene. [ref] A study found an increase in kid’s cavities linked to those who have a decreased sensitivity to the taste of sugar, perhaps due to eating more sugar to reach the same perception as those without the variant.  Scientists are still sorting out the reason why and how the change in the taste receptor protein is also altering insulin secretion.  [study]

More to read:
Here are a few more studies that are digging into the roles that our taste receptors play –outside of just the taste we perceive in our mouth.  Read through them to find out the more about the interactions of leptin, endocannabinoids, and insulin with taste receptors.  Pretty cool stuff!

← Lactose Intolerance: The genetics of not producing lactase
Biohacks – Experiments and Optimizations Based on My Genetics →