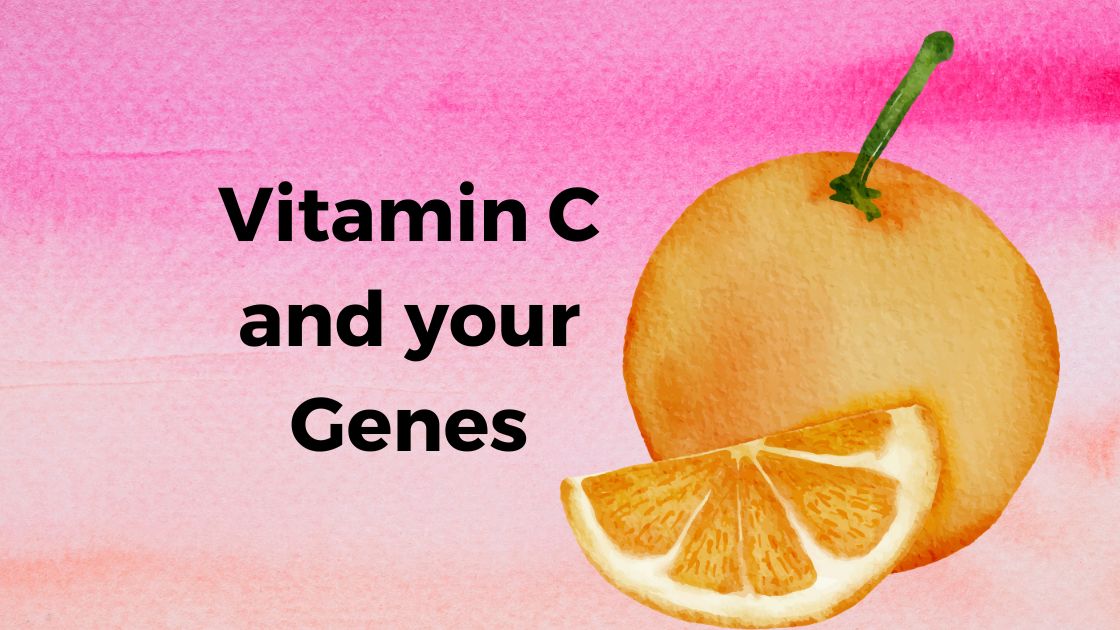 Vitamin C deficiency can show up in several different ways – from wounds being slow to heal to bleeding gums or even fatigue. The majority of people get the minimum amount of vitamin C needed to stave off scurvy, but optimizing your vitamin C intake can improve your skin, optimize your immune system, and even help to prevent heart disease.

Like most nutrients, genetics play a role in how vitamin C is absorbed, transported, and used by the body. This can influence your risk for certain diseases, and it can make a difference in the optimal amount of vitamin C you need to consume each day.

Vitamin C (ascorbic acid) has a variety of functions in the body. It is an antioxidant, as well as a co-factor in many important enzyme reactions, including the synthesis of collagen, carnitine, and some neurotransmitters. It is also important in regulating the absorption of iron and in immune function.[ref]

Antioxidants – two sides to this story: As an antioxidant, vitamin C donates an electron to do what is known in chemistry terms as ‘reducing an oxidant’. But vitamin C as an antioxidant isn’t quite as simple as the basic chemistry would imply. When ascorbic acid donates an electron to a metal, such as copper or iron, it can lead to the production of superoxide and hydrogen peroxide, both of which are reactive oxygen species. Thus, in the body, vitamin C can act as an antioxidant or can cause the creation of reactive oxygen species (ROS), depending on the level and tissue concentration.[ref]

Within the body’s organs, the adrenals, brain, pituitary, spleen, eyes, and liver contain the highest levels of vitamin C. High levels of vitamin C are also found in neutrophils, monocytes, lymphocytes, and platelets – all are important in the immune response.[ref]

Vitamin C as a cofactor:

Ascorbate (vitamin C) acts as an essential cofactor for many different enzymes. Notably, vitamin C is a cofactor for HIF1a (hypoxia-inducible factor), which controls several different genes and is important in tumor growth, heart disease, lung diseases, and diabetes.

Additionally, vitamin C is a cofactor for several of the enzymes needed for collagen synthesis, and this becomes important when looking at the symptoms of deficiency.[ref]

Most plants and animals make vitamin C and thus don’t need to get it through food.

Humans, and some other primates, are the exception. We cannot make vitamin C and have to rely on food sources. It is thought that since people used to be regularly infected with parasitic worms, we used to get vitamin C from the worms…

When vitamin C is consumed – either through foods or through supplements – the specific transporters allow the absorption of vitamin C into the cells of the intestine wall and then into the bloodstream for transport throughout the body.

These vitamin C transporters are then needed for moving ascorbate from the bloodstream into the cells. Additionally, a glucose transporter (GLUT1) can transport the reduced form of vitamin C into cells, which can be recycled back into the ascorbate form.[ref]

What happens when you don’t get enough vitamin C?

There are several major diseases associated with low vitamin C levels – with symptoms ranging from mild annoyances to, well, death from scurvy.

Symptoms of vitamin C deficiency can include:

Scurvy is often the first thing to come to mind with vitamin C deficiency.

Made famous by sailors who went months at sea with no fresh fruits or vegetables, scurvy is caused by a vitamin C deficiency that lasts a month or more. Symptoms of scurvy include fatigue, bleeding gums, easy bruising, poor wound healing, and bone pain. Vitamin C is needed in the synthesis of collagen, so the symptoms of scurvy are almost all related to defective collagen in the skin, blood vessels, and bones.[ref]

Vitamin C intake of less than 10 mg/day can lead to scurvy. This is rare to find in most modern countries unless someone is eating a limited diet. In the US, the average vitamin C intake from food is around 100mg/day.[ref]

What do your genes have to do with your vitamin C levels?

I mentioned above that there are specific transporters for vitamin C (SLC23A1, SLC23A2 genes). The amount of vitamin C that you absorb from food varies according to these genes. For example, when you and your friend eat an orange, your friend may absorb twice as much vitamin C as you do.

SLC23A1 and SLC23A2 are the genes that code for the two vitamin C transporters. Variants in these genes are linked to altered risk of gastric cancer, cardiovascular disease, and more. The highest variation in these vitamin C transporters is found in African populations. This may be because there has traditionally been an abundance of vitamin C-containing foods in the region, and thus the genetic variants didn’t matter as much to people living there.[ref]

What can boosting your vitamin C do for you?

Vitamin C is really well studied — with a range of different results.

A meta-analysis of studies using IV vitamin C in ICU patients found that it decreased the length of stay in the ICU by about 8%. Additionally, vitamin C reduces the length of time on a mechanical ventilator by 17%. The researchers commented that even though the 8% decrease in ICU time isn’t huge, the cost of vitamin C is dirt cheap and thus very cost-effective here.[ref]

Supplementing with vitamin C (oxaloacetate 100mg / ascorbic acid 150 mg) cut depression and anxiety rates by more than half for women suffering from PMS. That is a pretty big impact from just taking some vitamin C.[ref]

A meta-analysis of several trials shows that vitamin C supplementation reduces the risk of cancer mortality by about 20%.[ref]

Studies on vitamin C for reducing the risk of the common cold show various results – depending on the study group and the amount of vitamin C taken. One recent study on Korean army personnel found that 6g of vitamin C per day reduced the risk of colds by 80%. Note that the dose was 6 g (6000 mg) per day, so it may be that high doses of vitamin C are more effective for reducing colds.[ref]

Important here is that there is no way to get vitamin C levels high enough to cause cancer cell death through oral doses due to the saturation of the transporters in the intestines.

Important to note here is that IV vitamin C may work for specific types of cancer and for specific mutations in different cancers. This isn’t a DIY thing – obviously! Talk with your doctor for more information.

Not everyone benefits from high doses of vitamin C. These recent clinical trials show some different situations in which your oncologist may recommend vitamin C:

My two cents: If you have cancer and are discussing IV vitamin C with your doctor, consider the role that glucose levels play in whether vitamin C will be taken into the cancer cells via GLUT1. Talk with your oncologist about dietary options for lowering glucose (e.g., keto diet, diabetes drugs) and see if that would be helpful in your situation.

Various nutritional blood test panels will measure vitamin C levels. Generally, less than 0.2 mg/dl is considered deficient to the point of causing scurvy.[ref] But keep in mind that vitamin C levels fluctuate throughout the day, so it makes a big difference in your levels depending on the time of day when getting the testing done.

Genetic variants in the vitamin C transporter genes can change how you absorb and use vitamin C.

SLC23A1 and SLC23A2 are the genes that code for vitamin C transporters. Variants of these genes affect plasma levels of vitamin C. All of these variants are very common; some are associated with higher plasma vitamin C concentrations, and some with lower concentrations.

What about GLUT1?
SLC2A1 (also known as GLUT1) is the gene that codes for the enzyme that transports glucose across the cell wall. This same enzyme also transports the oxidized form of vitamin c, dehydroascorbic acid, into cells, where it is then reduced to ascorbic acid.[ref]

While there are studies linking GLUT1 polymorphisms to diabetes in some populations, I didn’t find any relating to vitamin C levels in the cell.

I hope you come away from this article with a realization that vitamin C is essential and needed for preventing various chronic health conditions (especially cardiovascular problems) as well as being important in the immune response. We are all different, though, in how much vitamin C we need each day.

How much do you need?

The US RDA for vitamin C is 60mg per day, which is just a little higher than what is needed to prevent scurvy (46mg/day). Many sources recommend getting more than the US RDA, and studies on cardiovascular disease indicate that a higher intake benefits heart health.

All of those recommendations on intake are very general and don’t take into account your own personal genetic variants. If you carry several of the variants linked to low vitamin C levels, you may want to increase your intake – and spread it out over the course of the day.

Vitamin C is a water-soluble vitamin and non-toxic, so excess vitamin C is eliminated and doesn’t build up. You (and your bathroom) will know when you’ve had too much. The term ‘personal bowel tolerance’ applies here. Some people can take vast amounts of vitamin C orally without intestinal troubles, but for others, more than a couple of grams can cause, well… rumbling.

Eat your fruits and vegetables:

Consider joining today to see the rest of this article, which covers the research on different types of vitamin C as well as diet interactions.

Vitamin D: Shedding Light on the Genetics of Vitamin D Levels
Your vitamin D levels are impacted by sun exposure – and your genes. Learn more about how vitamin D is made in the body and how your genetic variants impact your levels (Member’s article)

Converting Beta Carotene to Vitamin A
Genetics plays a huge role in how well you convert the carotenes into retinol. Some people are great at converting beta-carotene in their diet into the retinol form. Others carry genetic variants that significantly impair that conversion.

Vitamin B12: Genes that impact your need for B12
Several genes can influence your absorption, transport, and need for vitamin B12. Some people need higher amounts of B12, and some people thrive on different forms of B12. Take a look at your genetic data to see if you should up your intake of B12.