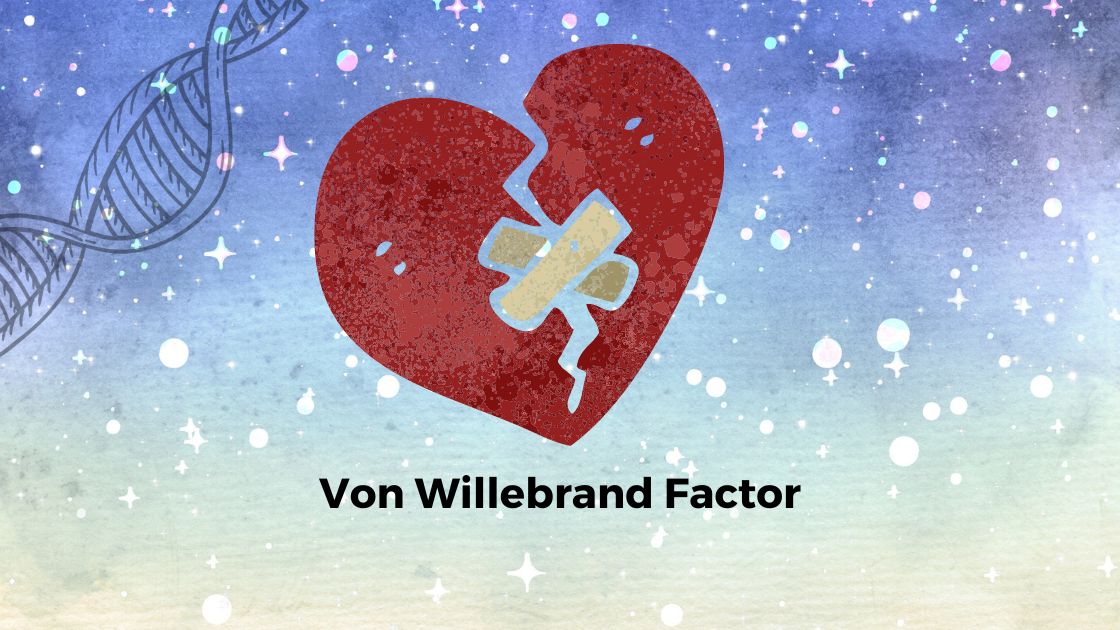 von Willebrand disease is a bleeding disorder in which blood doesn’t clot properly. It is due to genetic mutations that cause the von Willebrand factor not to perform as it should.

Symptoms of von Willebrand disease (VWD) are mild, and often people won’t know that they have it. The most commonly noted symptom is abnormal bleeding. For example:

Let’s dive into a few of the details as to why a lack of von Willebrand factor causes easy bleeding (or decreased clotting).

When you get a cut, platelets are an integral part of the body’s clotting system. Platelets jump into the break of tissue and release a bunch of different clotting factors, helping to bind to the site of the wound and create a clot to stop the blood flow.

Here is an overview showing the injury to the blood vessel (A), the recruitment and activation of platelets (B and C), the aggregation of the platelets (D), and then a plug forming to stop blood loss.[ref]

What does von Willebrand factor do?

Von Willebrand factor (VWF) is a large glycoprotein that interacts with platelets to help platelets adhere to a wound site. Additionally, VWF binds and carries other coagulation proteins such as factor VIII.[ref]

When a blood vessel is damaged, collagen is exposed beneath the endothelial cells. von Willebrand factor binds to the collagen – and then also binds to platelets, essentially making the connection to anchor the platelet to the wound site.

Because von Willebrand factor is the linking factor to collagen, the lack of VWF causes easy bleeding in the skin and mucous membranes. This easy bleeding is why people with VWF deficiency notice that nosebleeds won’t clot easily – and menstrual bleeding can be excessive.

There are three types of von Willebrand Disease:[ref]

VWD type 1 is the most common. It is defined by low levels (<50 IU/dL) of a functionally normal VWF, which is caused by inheriting a single VWF mutation.

VWD type 2 consists of the body creating the right amount of VWF, but the protein is malformed. There are four subtypes of VWD type 2:

People with type O blood naturally have lower levels of VWF. Thus, when testing for von Willebrand disease, the blood type needs to be considered.[ref]

There are quite a few mutations linked to von Willebrand disease. Below is just a partial list. Keep in mind, also, that 23andMe or AncestryDNA data are not guaranteed to be clinically accurate – meaning that false positives or false negatives are a possibility.

It is estimated that 1 – 3% of the population has von Willebrand disease.

If you suspect you bleed longer than is normal, you should talk with your doctor. There are blood tests for bleeding times, and your doctor can likely help with any symptoms you have (nosebleeds, excessive menstrual bleeding, etc).

Genes that Impact Ferritin Levels
Ferritin is the storage protein for iron in the body. Storing too little or too much iron can indicate an underlying problem. Discover the genetic variants that impact ferritin and how to increase ferritin with supplements or foods.

Non-secretors: Norovirus resistance and gut microbiome
A genetic variant in the FUT2 gene controls whether or not you secrete your blood type into your saliva and other bodily fluids, such as your intestinal mucosa. Non-secretion alters the gut microbiome – and protects you from Norovirus.