Biohacks – Experiments and Optimizations Based on My Genetics 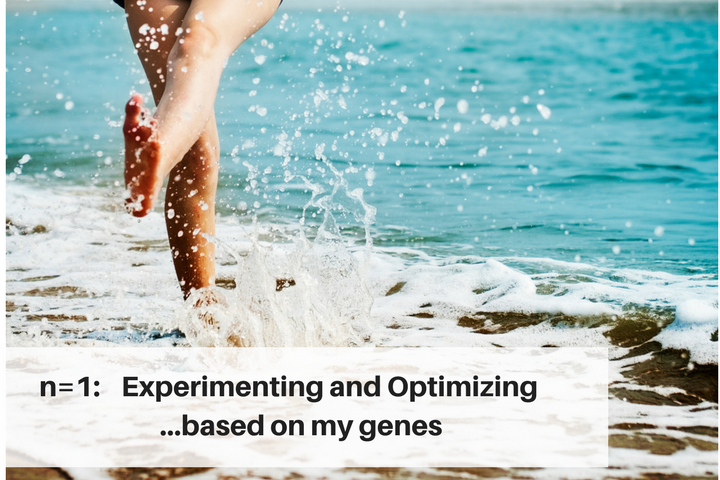 After three years of digging into genetics and learning all that I can about my genes, I wanted to get a little personal and share a few things that have worked for me.

I would also love to hear back from all of you.  Leave a comment below or comment on the Facebook page if you have learned something from your genes and what impact it has had on your diet or lifestyle.

n=1 experiments:  the best lab rat is me

Methylation cycle:
I started off my genetic ‘lifehacking’ the same way that many people do: “Oh, no! I have an MTHFR polymorphism that affects so many things”.  So, of course, I read a few things by people with the word doctor next to their names and then ran out and bought some methylfolate and some hydroxycobalamin (B12).  Methylfolate, at a 400 mcg dose, was the first vitamin or supplement that ever had an effect on me: it gave me an almost immediate headache! I was fascinated by the idea that a vitamin could do something- even something bad – that quickly.

Backing off the methylfolate for a while and then re-introducing it slowly at less than 100 mcg/day got me around the headaches and gave me a new appreciation for ‘just a vitamin’.  A 400 mcg capsule is tiny and taking it apart to sprinkle out a quarter of it a day seemed like it would be impossible to affect me, but it did.

So what did adding methyl folate and hydroxocobalamin do?  It was subtle, but I found that I was no longer as foggy-headed, no longer searching for words, and had more energy in the afternoons.  I was in my early forties, and I no longer had that horrible feeling that I was ‘getting old’!

What have I learned since then?  Having read a lot more from other researchers and medical doctors, I’ve come to realize that for me, creatine, glycine, and choline are bigger players in my mental fluidity and energy levels, rather than methylfolate.  I do still take 400 mcg of methylfolate periodically, but I tend to do that just when I haven’t been eating a lot of folate-rich foods.   (Want to learn more about the role of creatine and glycine in the methylation cycle?  Chris Masterjohn has an excellent podcast on the methylation system, with a transcript available if you would rather read than listen. )

Lightbulbs went off!  My permanently stuffy nose, constant throat clearing, migraines, heartburn, and periodic itchy hives all suddenly made sense.  I had had allergy testing about ten years earlier because I had noticed that allergy medicine reduced the frequency of hives for me.  But the doctor told me that I was only mildly allergic to a couple of types of tree pollen and that allergy medicine couldn’t be helping my migraines.  Turns out that I shouldn’t always listen to the doctor without questioning…   A low histamine diet gave me immediate results.  I could breathe through my nose, got rid of the post-nasal drip, migraines were gone, and nothing itched.  I haven’t needed to stay on a low histamine diet long term, but I do still stay away from eating a lot of high histamine foods in one meal.

While my genetic predisposition to produce less DAO was playing a role in my histamine issues, I knew that it wasn’t the root cause.  Those polymorphisms in the gene that produces DAO are fairly common and everyone with them doesn’t have histamine intolerance.  I think for me, the problem was based in my gut microbiome.  I had been doing all the ‘healthy stuff’: drinking kombucha, taking probiotics, fermenting my own sauerkraut, and making homemade yogurt.  Cutting out all the ferments helped my histamine problems.  Getting my microbiome tested and finding out that I had no bifidobacteria lead me to find a probiotic that was not full of histamine producing strains.  Adding gelatin to my morning coffee increased my glycine intake, probably helping my gut lining. Eating dinner earlier, sleeping better — everything probably plays a part.

Sleeping:
I’ve always thought of myself as an ‘ok’ sleeper.  I usually could fall asleep easily and wake up at a decent time.  Yes, I had the occasional (and sometimes more frequent) bouts of being wide awake from 3 am – 5 am, but I didn’t think that sleep was something that I needed to focus on.

After reading a few studies on low levels of light impacting sleep quality, I took the plunge (ok – it ended up costing less than $100) and bought some light-blocking curtains for my bedroom.  It really did make a difference in how well I slept.  Fast-forward a year…  I did more and more reading on the effects of blue-light at night, realized the research was solid and pretty definitive, and finally spent ten bucks on a pair of blue-blocking safety glasses.  I wear them every evening now for a couple of hours before going to bed.  It took a couple of weeks to notice a difference, but it hit me one day that I was sleeping like a log and jumping out of bed in the morning, wide-eyed, bushy-tailed and all the other cliches.

I’ve been wearing the dorky looking glasses now for about six weeks.  Yep, my husband and kids still laugh when I put them on.  But I feel really good each morning, and I haven’t seen 3 am in six weeks.  I have noticed that I am sleeping about a half-hour less than I used to sleep.

Diet:
I had tried the ketogenic diet years ago (the Adkins diet) and felt truly awful on it.  With all the great studies coming out about intermittent fasting, I couldn’t figure out why it didn’t make me feel great to skip breakfast.  Figuring out that I carry a mutation for short-chain acyl-CoA dehydrogenase deficiency made sense of all of it.  I have a somewhat impaired ability to burn fat for energy, so a ketogenic diet or fasting makes me feel icky. While I think the science coming out about intermittent fasting is extremely interesting, it is good to know why eating breakfast works for me.  I have shifted dinner to be a little earlier, giving me a 12-13 hour fast overnight.

Vitamin A:
After looking into my genes that convert beta-carotene to vitamin A, I realized that I wasn’t coming anywhere near the RDA for vitamin A and probably never had.  So I got a vitamin A supplement that was truly vitamin A and not beta-carotene, and I took it off and on for several months.  No mental boost, no feeling great, nothing.  Except, one day I noticed the back of my arms were smooth.  I had had little bumps on my arms – keratosis pilaris – since I was a kid, and now they were completely gone.  It hit me then that if vitamin A helps acne, that it may also help keratosis pilaris.  A little research showed that was true, and I had probably been slightly deficient in vitamin A my whole life.  Since Vitamin A is a fat-soluble vitamin, I didn’t want to go overboard on supplementing with it.  So I’ve taken a few months off of supplementing it several times over the past couple of years, and after a month or two of no vitamin A pills, my keratosis pilaris starts coming back.   (Yes, I know that eating liver could be a better option than vitamin A pills, but I really hate liver.)

Choline:
I mentioned above that choline plays a role in the methylation cycle.  Earlier this spring, I came across some interesting research on how people’s need for choline varied quite a bit, depending on their genetics.  I wrote a blog post on it, noted that I was in the camp of needing more choline, and made more of an effort to eat eggs several times a week for breakfast.  Recently, I read back through my own article on choline and it finally hit me that even if I ate a couple of eggs every day (and I wasn’t that consistent), it wasn’t going to get me to the level of choline that I needed.  So I finally took my own advice :-) Supplementing with a little bit of choline bitartrate gives me a nice mental boost and extra energy.  Too much, and it gives me a headache, reminiscent of the headaches that methylfolate initially gave me. This time I’m taking it slow and not going overboard with it, and I’ve got some Alpha-GPC choline ordered to see if it is a better fit for me. (Yes, I know that liver is a great source of choline as well, but…)

What works for me may not work for you, even if you have some of the same genetic variants that I do.  Learn to listen to your own body and not what an article tells you to do.

General, population-wide nutritional advice may work for the majority of people, but on an individual level, it often misses the mark.   Read, learn, and figure out what works for you.

← Lactose Intolerance: The genetics of not producing lactase
How well do AncestryDNA.com and 23andMe data match? →