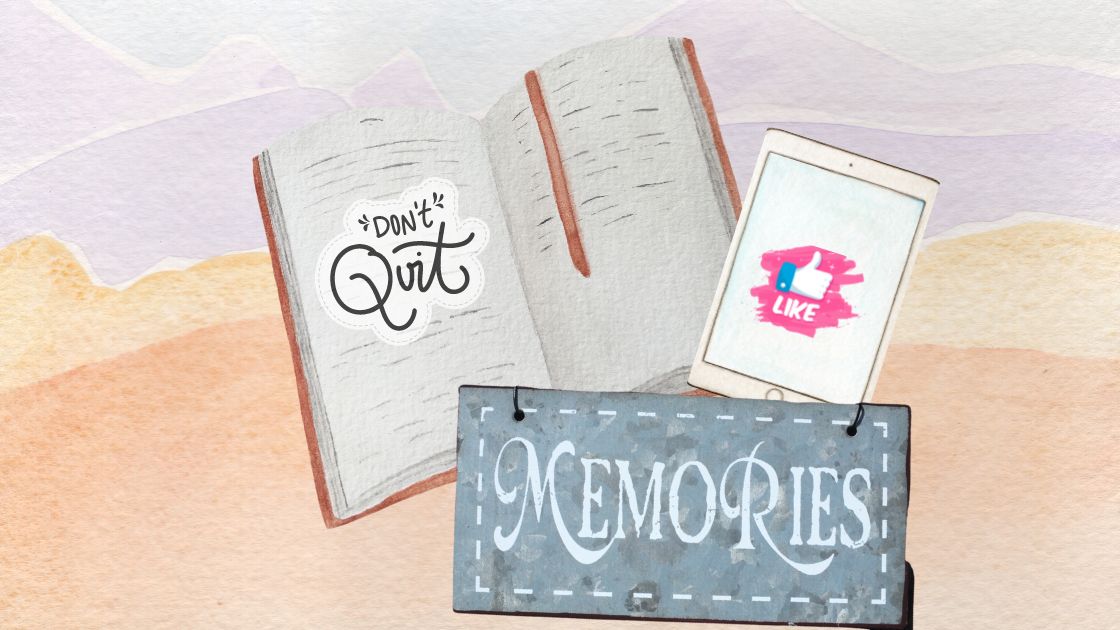 This article covers information on neurotransmitters related to psychiatric health.  If you are under psychiatric care, talk with your doctor before making any changes.

Dopamine is derived from the amino acid tyrosine, which is converted to L-dopa and then to dopamine.

Dopamine is involved in:

The dopamine molecule acts on dopamine receptors to cause motion and emotion.

Prolactin:
Dopamine also functions within the hypothalamus and pituitary gland to affect hormones. Specifically, dopamine inhibits prolactin. Without enough dopamine, it can lead to amenorrhea (lack of periods) in women and impotence and gynecomastia (moobs) in males. 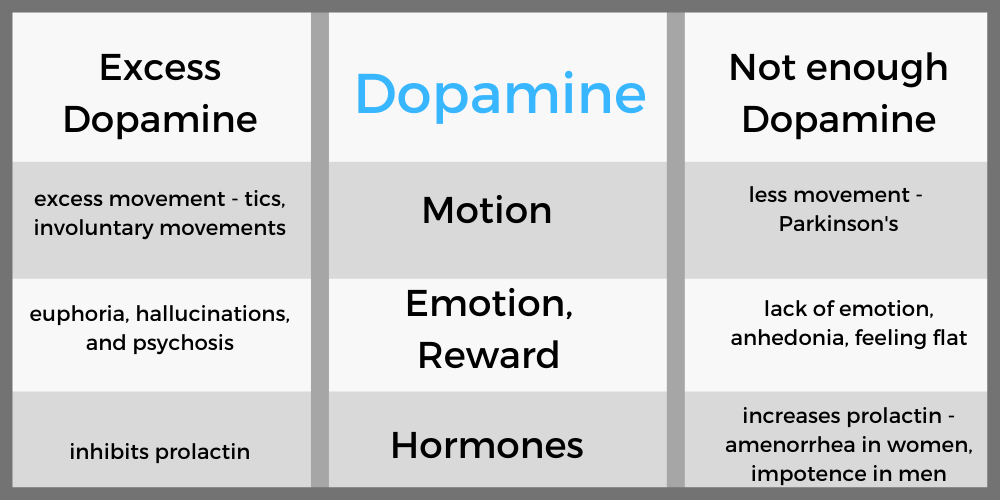 Where is dopamine made?

There are two small regions deep in the brain where dopamine is made:

From there, it travels via tracts to other areas of the brain.

What do the dopamine receptors do?

Dopamine doesn’t do anything by itself – it needs to bind with a receptor to cause an action. There are five different dopamine receptors in humans. They are coded for by the DRD1 through DRD5 genes. The receptors are responsible for the slightly different effects of dopamine in various brain regions.

The most common dopamine receptor in the brain is DRD1. It is found in several regions of the brain, including the neostriatum, basolateral amygdala, cerebral cortex, hypothalamus, and thalamus.

The DRD1 receptor is linked to the effects of alcohol consumption. Blocking the DRD1 gene decreases alcohol-seeking behavior in animal studies. It also decreases heroin and cocaine seeking-behavior.[ref]

Working memory – short-term memory needed for thinking and speaking – depends on the DRD1 receptors in the prefrontal cortex. Interestingly, working memory is considered to have a strong genetic component based on the DRD1 gene variants.[ref]

The DRD2 receptor is less abundant in the cerebral cortex than the DRD1 receptors, but it is abundant in other areas of the brain with dopaminergic neurons.

The DRD3 receptor is found in the ventral striatum and other limbic areas. In humans, there are low amounts of DRD3 receptors found in the cortical regions. This differs from other species and is a good reminder that animal studies may not be totally applicable to humans.[ref]

This dopamine receptor is found at lower levels than DRD1 through DRD3. It is found in the retina, cerebral cortex, amygdala, hypothalamus, and pituitary. The DRD4 receptor hasn’t been shown to be all that important in alcohol, opiate, or cocaine addiction.[ref]

The DRD5 receptor is very similar to the DRD1 receptor, and they are often located together. There seems to be a lot more research on DRD1, but often substances that bind to DRD1 also bind to DRD5.[ref]

How does dopamine relate to addiction?

Addiction to drugs causes compulsive drug-seeking behavior. The dopamine system is involved in the rewarding effects of drugs, and a lot of addictive drugs increase dopamine levels in certain regions of the brain. In fact, it has been known since the 1990s that blocking dopamine transmission takes away the reward effects of some addictive substances, such as cocaine and amphetamines.[ref]

There are three theories on how dopamine is related to addiction. First, the extra dopamine produced by addictive substances trains the brain through the reward system. It is the idea that the brain learns to like the drug, or makes it a habit. The second theory is that addictive substances change the brain circuits, making them hypersensitive. Third, researchers theorize that there is an imbalance between dopamine and other neurotransmitters. [ref]

Connections between dopamine levels and inflammation:

Neuroinflammation in the dopaminergic neurons causes cell death and a reduction in dopamine. This is thought to be the cause of Parkinson’s disease.[ref]

Tetrahydrobiopterin (BH4) is needed for the synthesis of dopamine. Pro-inflammatory cytokines reduce the production of BH4, thus potentially reducing dopamine levels in situations of systemic inflammation.[ref]

” Dopaminergic neurotransmission is very sensitive to inflammation. At the periphery, the production of neopterin and nitric oxide during inflammation consumes tetrahydrobiopterin to the detriment of the hydroxylase enzymes that use this compound as a cofactor”.[ref]

*given in plus orientation to match 23andMe, AncestryDNA data

The following variant is known as the DRD2 TaqI A variant, located in the ANKK1 gene. It is thought to be linked with a polymorphism in the DRD2 gene that affects its function.[ref]

The COMT gene codes for the enzyme that breaks down dopamine and other catecholamine neurotransmitters. A common variant can decrease or increase the speed at which this enzyme works.

This gene codes for the dopamine transporter, known as DAT1.

Again, let me caution that you don’t want to experiment with your neurotransmitters if you are under psychiatric care without talking with your doctor. Do more research, talk with your doctor/health care practitioner, and know what you are doing before you mess around here.

Diet hacks: get enough protein to produce dopamine for your brain to function right

Dopamine is produced by converting the amino acid tyrosine first into l-dopa and then into dopamine. The body produces tyrosine from phenylalanine, which you get from your diet. You can also get tyrosine from foods. A diet that includes enough protein-rich foods (containing tyrosine/phenylalanine) is needed for dopamine production.[ref]

There have been several studies looking at the cognitive response in people who ate a diet lacking phenylalanine and tyrosine for a day. The results show that the acute decrease in dopamine changes response to timing, decreased functional connectivity in the brain, and slowed reaction time.[ref][ref][ref]

Lithium?
An animal study showed that chronic lithium treatment  (similar to prescription levels of lithium, rather than supplemental lithium orotate) was able to blunt an anticipated spike in dopamine. This was thought to be one way that lithium may be effective in mania, which should be in a high dopamine state.[ref] Other studies, though, show that lithium increases dopamine following a TBI.[ref]

Ketogenic diet:
At least in rats, a ketogenic diet reduced the effects of daily cocaine injections.[ref] This is obviously not a study that is going to be repeated in humans…

In kids with epilepsy, when they went on a ketogenic diet to control the seizures, their dopamine metabolites decreased.[ref]

Sugar causes the release of dopamine.  Research shows this is both from the taste of sugar and nutrition (energy) from sugar.[ref] You know how you read headlines stating that sugar is just like cocaine in the brain — well, it turns out that isn’t really correct.  Sugar affects dopamine in different areas of the brain (natural reward areas) than cocaine does.[ref]

Serotonin Genes
Serotonin is a neurotransmitter that is important in depression, sleep, and many other aspects of health. Learn how your genetic variants in the serotonin receptor genes impact their function.

COMT Gene
Wondering why your neurotransmitters are out of balance? It could be due to your COMT genetic variants. The COMT gene codes for the enzyme catechol-O-methyltransferase which breaks down (metabolizes) the neurotransmitters dopamine, epinephrine, and norepinephrine.