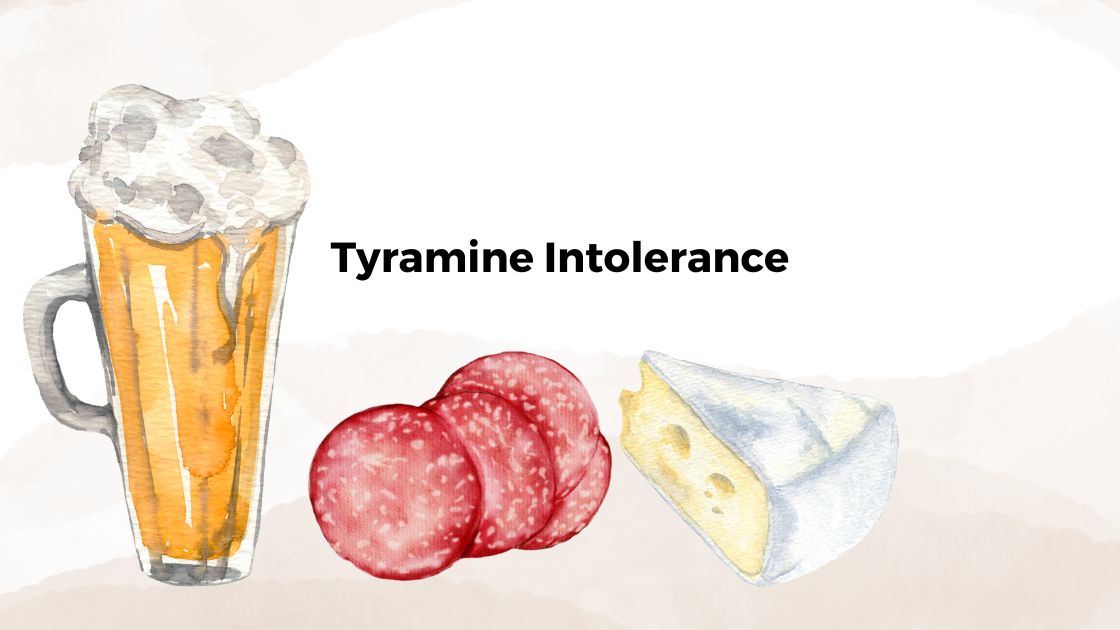 What is tyramine intolerance? Symptoms, foods, and metabolism

High tyramine levels in meals can trigger a tyramine hypertensive crisis, commonly known as the ‘cheese effect.’ This is usually associated with taking an MAO inhibitor, and people on an MAOI are cautioned by their doctor about the dietary interactions.

The hypertensive crisis is caused by too much tyramine, causing a sudden blood pressure increase leading to other symptoms.

I’ll start with some background on tyramine and then explain the genetic implications.

Tyramine is a biogenic amine, which refers to its chemical structure with nitrogen at its base. It is naturally found at trace levels in the human body.

Tyramine, in low amounts, can act to release catecholamine neurotransmitters. It can cross the blood-brain barrier and act as a neuromodulator in the brain.

Tyramine can also be found in foods – especially fermented foods or foods close to spoiling. This is where the ‘cheese effect‘ comes into play. (Read the background on how it was discovered as a reaction in people on MOAI drugs)

Which foods are high in tyramine?

A quick list of foods high in tyramine include:

How does the body get rid of tyramine?

Tyramine is absorbed in the intestines from foods. Additionally, certain gut microbes can produce tyramine from tyrosine.

Tyramine is mainly broken down (metabolized) in the body using these three enzymes:

MAO-A is the enzyme that metabolizes several neurotransmitters, including dopamine.

Inhibiting or decreasing MAO-A is one way to increase dopamine levels. Thus, drugs that act as MAO-A inhibitors (MAOIs) can be used as antidepressants, although they usually aren’t the first choice due to the dietary interactions with tyramine.

Once tyramine is metabolized, utilizing one of the enzymes above in the reaction, it is eliminated from the body in the urine.[ref]

If you get too much tyramine due to eating foods high in tyramine and not breaking down the tyramine (e.g., when taking an MAO-A inhibitor), it can throw your body into a hypertensive crisis, raising systolic blood pressure by 30 mmHg or more.

This is called the ‘tyramine pressor response’.

Tyramine takes the place of other neurotransmitters, triggering the body to release a bunch of norepinephrine, constricting blood vessels and raising blood pressure.[ref]

Interestingly, some of the first studies on the pressor effect of raising blood pressure were done in the early 1900s using rotting horse meat.[ref]

There are a couple of reasons for this:

For people susceptible to migraines, the list of foods high in tyramine may correspond to your list of ‘triggers’.

Tyramine is chemically similar to amphetamine and methamphetamine, although it doesn’t produce the same effects. The state of Florida banned tyramine as a Schedule I drug in 2012.[ref]

Does this mean that selling chocolate and cheese is a felony in Florida?

Members: Log in to see your data below.
Not a member? Join here. Membership lets you see your data right in each article and also gives you access to the members only information in the Lifehacks sections.

Let me be clear: There aren’t any specific research studies that specify that the combination of these variants causes tyramine intolerance.

Instead, the variants below have been studied in reference to their impact on enzyme activity in the molecules that metabolize tyramine.

Reduced enzyme activity in just one gene is not likely to cause you a whole lot of problems with high tyramine foods since there are multiple ways your body can break it down. But reduced activity in a couple of the genes theoretically could cause problems with tyramine metabolism. Again, this all depends on your diet and how often you eat foods high in tyramine.

Tyramine taken in from food is mainly broken down in the liver using the enzymes MAOA, FMO3, and CYP2D6.[ref]

The monoamine oxidase A (MAOA) enzyme breaks down tyramine, serotonin, dopamine, epinephrine, and norepinephrine. It is located on the X chromosome, so males will only have one copy of the gene.

This is one of the main liver enzymes for breaking down tyramine (as well as other biogenic amines). FMO3, or flavin-containing monooxygenase 3, is dependent on FAD and FMN as cofactors.

These first three variants are more significant reductions in enzyme activity and are linked to TMAU (fish odor or strong body odor). Note that 23andMe doesn’t cover all the FMO3 variants that decrease the function.

Several genetic variants decrease or eliminate the CYP2D6 enzyme, and these variants can also influence your ability to metabolize certain medications. (Read more about CYP2D6)

Vitamin B2 (riboflavin) is important for people with FMO3 genetic variants.[ref][ref] Make sure you get enough riboflavin via your diet or consider supplementing with riboflavin.

Histamine Intolerance
Excess histamine can cause allergy-type reactions in some people.

Serotonin
Your genes play a role in how much serotonin is made, how it is broken down, and how cells receive the serotonin signal.

Your need for riboflavin (B2): MTHFR and other genetic variants
Riboflavin (Vitamin B2) is a water-soluble vitamin that is a cofactor for many enzymes in the body.

Detoxification: Phase I and Phase II Metabolism
Our body has an amazing capacity to rid itself of harmful substances. We take in toxins daily by eating natural plant toxins. We are exposed to toxicants (man-made toxins) through pesticide residue, air pollution, skincare products, and medications.