Have you ever had really bad jet lag and feel like you’ve been hit by a truck, disoriented, and unable to think clearly? Or stayed up late and felt off-kilter the next day?

For some, the heart of depression or mood disorders lies in circadian rhythm disruption. Fortunately, there are solutions that may help.

This article explains how circadian rhythm and genetics impact depression, and it wraps up with research-backed solutions. Members will see their genotype report below, plus additional solutions in the Lifehacks section. Join today.
Note: If you are under a doctor’s care, always talk to your doctor before making any changes.

Researchers use genetics to understand the biological pathways that drive mood disorders. By looking at genetic variants that are more common in people with depression, researchers can figure out the root cause of depression for individuals.

No, it isn’t all genetic. Genetic variants combine with environmental factors in mood disorders.

In fact, multiple genetic pathways can increase the susceptibility to mood disorders – this isn’t a one-size-fits-all problem. Multiple causes, many solutions.

One factor in mood disorders is a disruption of the circadian rhythm genes.

Read on to find out if this could be at the heart of the problem for you.

Before we get into depression and genetics, let’s dive into the science of how the circadian rhythm works.

At the core of biology for animals (and plants) are specific genes that code for a molecular circadian clock.

Think about it…for millions of years, plants and animals have had one sustaining, never changing factor: the sun comes up in the morning and sets at night. A 24-hour rhythm that never changes. (Until electric lights)

Our biological molecular clock, called the circadian clock, sets the rhythm of literally thousands of our genes over the course of about 24-hours.

The molecular circadian clock is located in the hypothalamus region of the brain. It has some key genetic players:  CLOCK and BMAL1 during the day, and CRY and PER at night.

Example: Your body produces enzymes during the day to break down the foods and toxins you consume or are exposed to. At night, cellular maintenance processes take place, getting you ready for the next day.

Here’s a quick visual for you showing the Circadian Clock Genes: 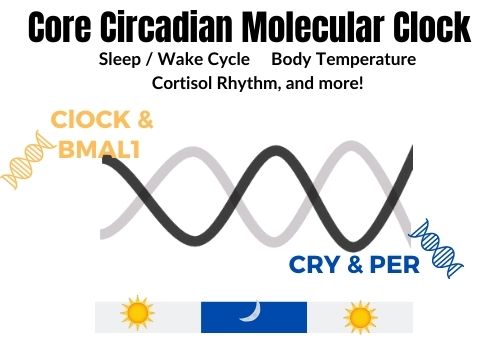 One of the first things that people think about in regards to circadian rhythm is the sleep/wake cycle. We naturally sleep and wake on about the same schedule every day – or we would if it weren’t for alarm clocks, work, and social engagements…

Sleep is essential for good mental health, but it is just one aspect of the circadian rhythm. So don’t get caught up in thinking that this is all about sleep. There is more to it!

For humans, the average circadian clock runs about 15 minutes longer than 24 hours. But we aren’t all average, and the circadian period varies between a few minutes less than 24 hours to about a half-hour longer.[ref].

To keep us on track, the body has a built-in clock setting mechanism — exposure to light.

Imagine if your clock ran at about 24.5 hours instead of 24. Within a week, you would be about seven hours out of sync.

They’ve done studies with people kept in caves or bunkers, and with no outside light, this does happen.

Below is a graph from a recent study where the participant stayed in a bunker for 9 days. The first two days and last two days, he had lights available to turn on when he wanted. During days 3 through 7, there was a dim light that was constantly turned on. As you can see, sleep timing (in yellow) and sleep duration changed a lot throughout the week. (creative commons image license) [ref] 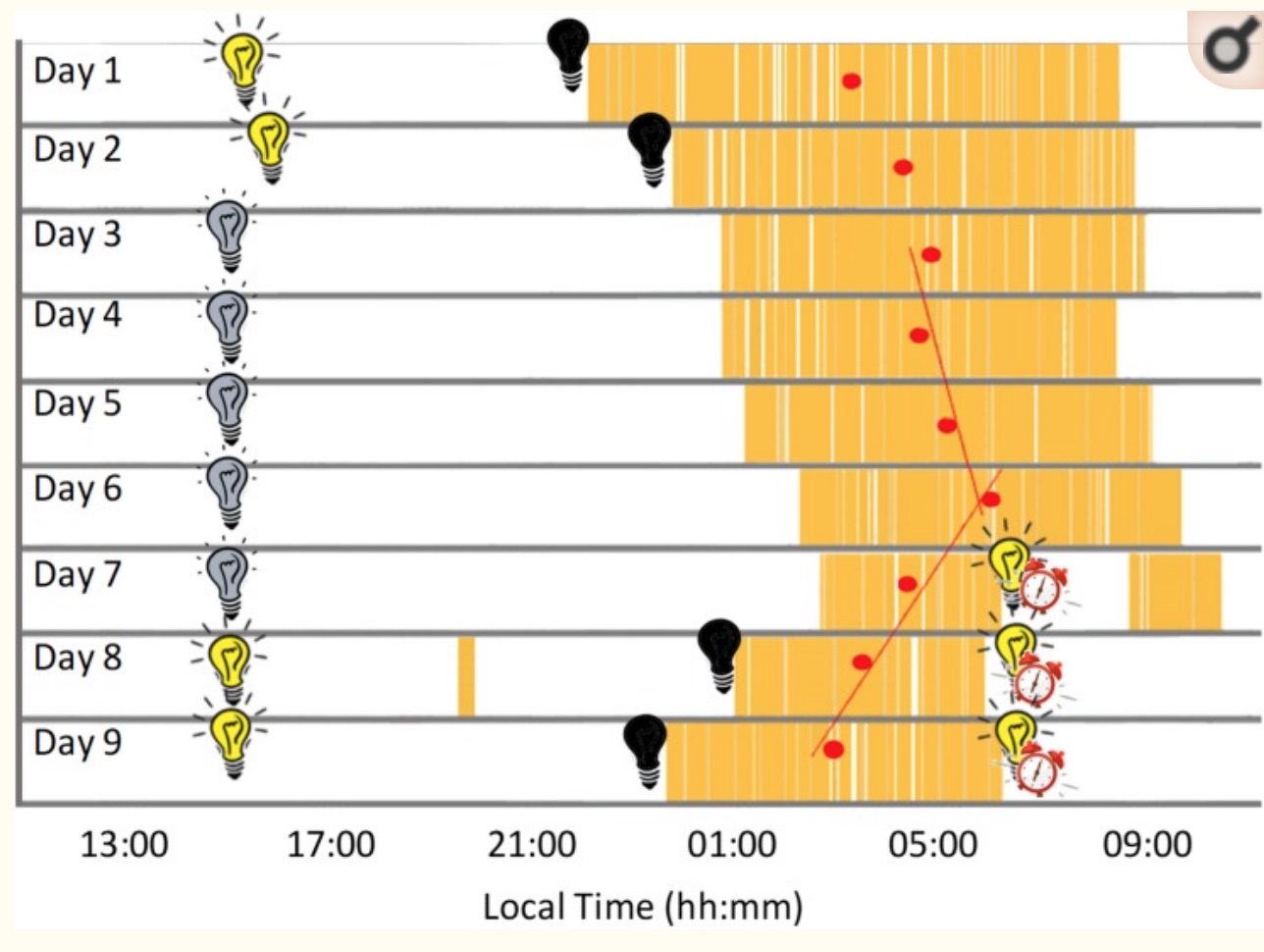 While light is the main way that the body resets the circadian clock, food timing, and temperature changes can also make an impact.

Often referred to as the ‘sleep hormone’, melatonin levels rise at night when it is dark. It is a key molecule in circadian rhythm signaling.

Animal studies specifically show that melatonin is part of the regulation of some of the core clock genes. In fact, without melatonin, the PER1 gene doesn’t rise and fall rhythmically.[ref]

Melatonin is produced by the pineal gland in large amounts at night, due to the lack of light. Exposure to artificial light at night significantly decreases overnight melatonin levels.

To dig a little deeper here, your body’s core circadian rhythm is controlled in the part of the hypothalamus called the suprachiasmatic nucleus (SCN).

Melatonin is one way the body synchronizes the central and peripheral clocks.

The rhythm of depression and anxiety:

There are several theories over the decades as to why circadian rhythm matters so much in depression and anxiety disorders.

When you are out of sync with your environment, it is disconcerting, to say the least.

Neuropsychiatric diseases such as schizophrenia and bipolar disorder are tightly linked to the disruption of the core circadian rhythm genes. For example, in people with schizophrenia, cell studies show that there is a loss of circadian rhythm for the CRY1 and PER1 genes. Research also shows that there is a disruption in the CLOCK gene expression.[ref]

Researchers can manipulate the core circadian genes in animals – deleting genes or altering rhythms to see what happens. This gives us a lot of insight into what each circadian gene impacts.

In major depressive disorder, research also shows that there is a disruption of the phase and amplitude of the core circadian clock genes. In a landmark study in 2013, researchers compared circadian gene expression in the brains of people with depression to a control group. The results showed that depressed people had weaker cyclical clock gene patterns with shifted timing and “disrupted phase relationships between individual circadian genes.”[ref] While researchers had known for decades that there was a relationship between sleep, depression, and circadian rhythm, this study clearly showed that people with depression had a de-synchronization in the core circadian clock genes.

Seasonal depression affects a lot of people living in northern climates in the winter months. It is defined as a period of fatigue, depression, hopelessness –  occurring with the changing of the seasons (usually late fall/winter).

Research shows that people with seasonal affective disorder (SAD) have a delay of about 1.5 hours in their melatonin production (compared to healthy controls). Along with the delay in melatonin, their body temperature rhythm was also delayed. Resetting this with bright light therapy in the morning shifted the melatonin rhythm back to normal and reversed depressive symptoms.[ref]

Depression medications that act on the circadian system:

Definitions to keep us on track:

Depression is kind of a catch-all term, with specific types defined by doctors. Here are several that will be referred to throughout this article.

The following circadian gene variants are linked with depression. Keep in mind these are just the variants that have been identified so far by researchers and this only represents the variants found in 23andMe/AncestryDNA. (In other words – there are other variants, both known and unknown, that impact circadian rhythm and depression risk.)

CRY1 gene: codes for a core circadian clock gene (partners with PER gene)

CRY2 gene: This core circadian clock protein also partners with the PER proteins. People with seasonal depression, dysthymia, and bipolar disorder have lower levels of CRY2.[ref]

PER2 gene: codes for a core circadian clock gene (partners with CRY proteins)

*note that this is given in the plus orientation to match your genetic data.
Members: Your genotype for rs934945 is —.

PER3 gene: codes for a core circadian clock protein (partners with CRY proteins)

NPAS2 gene: codes for a paralogous (similar) protein to CLOCK that can bind with BMAL1

NR1D1 gene: codes for REV-ERBα, which is part of a feedback control loop for the production of BMAL1[ref]

OPN4 gene: codes for the melanopsin receptor in the retina of the eye that senses light and sets the circadian rhythm

Let me reiterate: this information is for educational purposes. If you are under a doctor’s care for a mood disorder, please check with your doctor before making any changes.

1) Shifting the Circadian Clock with light

Melatonin: Key to Health and Longevity
It seems like everything that I’ve written about lately has a common thread: melatonin. When I started weaving together all those melatonin threads, a big picture was revealed. You could say it is a… tapestry of health.

Using your genetic data to solve sleep problems
A good night’s sleep is invaluable – priceless, even – but so many people know the frustration of not being able to regularly sleep well. Not getting enough quality sleep can lead to many chronic diseases such as diabetes, obesity, dementia, and heart disease. Yes, sleep really is that important!

DEC2: Are you a genetic short sleeper?
A rare mutation in the  DEC2 gene causes some people to need about an hour and a half less sleep each night. People with the mutation average 6 to 6.5 hours of sleep.