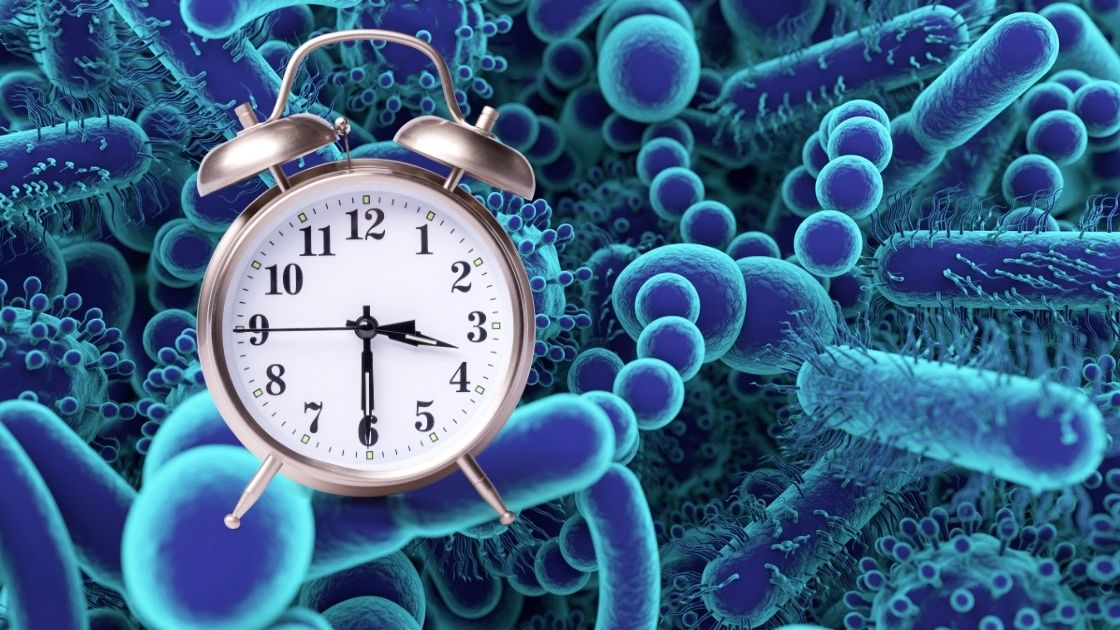 I thought about titling this article ‘going to the dark side’ but decided that bathroom humor should be left behind…(get it, behind :-)  Enough of the puns and onto the important science stuff that you can actually apply to your life today.

First a quick overview of the circadian clock:

We have both a core circadian clock (in the suprachiasmatic nucleus of the brain) and peripheral clocks in other tissues such as the liver. These clock genes include CLOCK and BMAL1 which bind together for what is called the forward half of the clock, and then PER and CRY, which form the negative arm of the clock. These genes are translated into their proteins over their 24-hour rhythm, and that rhythm can be adjusted (entrained) each day through sunlight hitting specific receptors in the retina of the eye.

When someone stays in total darkness for days on end, their circadian clock doesn’t get re-set via light. Experiments with this show that people’s circadian gene expression varies a bit and, on average, is a little longer than 24 hours (~24.4 hrs). We use light to reset our circadian rhythm every day by getting up and exposing ourselves to light. (Yes – artificial light at night is messing with our circadian rhythm, increasing the risk of cancer and mood disorders. Read more here and here.)

Light isn’t the only way to influence our circadian gene expression.

The ‘peripheral clock’ in our liver is entrained by whenever we normally eat foods. This has some big implications on timing food for when your body is ready for breaking it down. (Read more here.)

Another big player in our circadian gene expression timing that may surprise you: our gut microbiome. Those trillions of bacteria, viruses, and archaea that make up your microbiome are both influenced by you (their host!) and have an influence on you.

Say you go out for a big meal of lasagna and wine a couple of hours later than normal — and then you pay the price with a restless night and bad sleep. You get up the next morning feeling groggy and just ‘off’, and you may want to blame the wine or wonder if the calamari you ate as an appetizer was bad. It could be that your gut microbiome is to blame here. (And not in the way you might be thinking… ) Just like jet lag can mess up your whole circadian system and make you feel awful, messing with the timing, quantity, and content of what you eat can affect your circadian system via what your gut bugs are doing.

A 2016 study “Microbiota Diurnal Rhythmicity Programs Host Transcriptome Oscillations” in the journal Cell looked at the effects of the microbiome on the epigenetic markers and gene transcription of the host organism (e.g. mice, people). The researchers found that in the mouse’s intestinal mucosa, the number of bacteria was 10 times higher during the mouse’s active period (dark for nocturnal mice) than during the inactive period. The bacteria were interacting with the intestinal mucosa and signaling to both intestinal cells and changing the host’s liver cellular expression.  The whole journal article is freely available and worth reading if you are interested.  The researchers conclude “We found that the bacterial microbiome features rhythmic patterns of localization and metabolite secretion in the large intestine. These rhythms influence diurnal gene expression locally in the intestine and distally in the liver. Surprisingly, ablation of microbiota rhythms by antibiotic treatment and in germ-free mice not only leads to a loss of oscillations on the chromatin and transcript level but also concomitantly incites a massive gain of de novo oscillations, resulting in a temporal reorganization of metabolic pathways in both intestine and liver.”

So the bacteria in our gut microbiome fluctuate in numbers and location over the course of 24 hours. They are producing metabolites that act as signals to our human cells, and these signals are oscillating over the course of a 24-hour day.

These short-chain fatty acids produced by the gut microbiome may be what is directly impacting the host circadian rhythm.  A study (again in mice) found that “specific microbial metabolites induced under low or high-fat feeding, particularly short-chain fatty acids, but not hydrogen sulfide, directly modulate circadian clock gene expression within hepatocytes. These results underscore the ability of microbially-derived metabolites to regulate or modify central and hepatic circadian rhythm and host metabolic function, the latter following intake of a Westernized diet.” The whole study is available (open access). 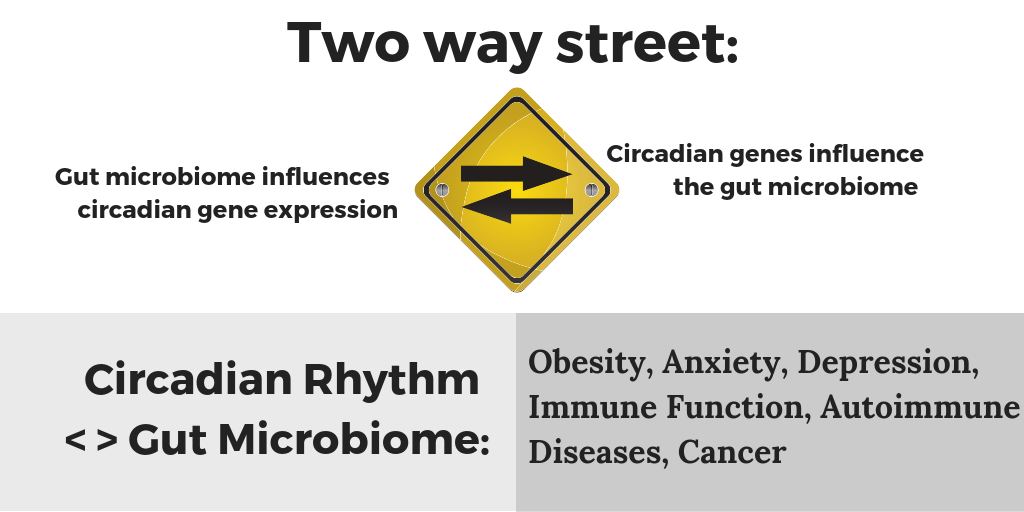 What happens when we mess with the circadian fluctuations of our microbiome?

This is a two-way street, though. More than just a tummy ache can ensue…

Another study in Cell,  Transkingdom Control of Microbiota Diurnal Oscillations Promotes Metabolic Homeostasis tackled the question of how the microbiome is influencing us. The researchers found that species fluctuated in number over the course of the day, and that feeding times played into this. Not too surprising that more of certain bacteria would be supported after a meal of their favorite food. But what was interesting is that when they switched the mice to eat during the daytime (normally they are nocturnal), the gut bacterial species didn’t fluctuate in the same ways. Next, the researchers put the mice into light-changing conditions to mimic jet lag with an eight-hour time shift every three days. This completely messed up the circadian oscillation of the microbiome, and after a period of time, the jet lag mice got fat while eating the same calories and diet as the non-jetlagged mice. The researchers also sampled a couple of human subjects repeatedly for several days to see if the human gut microbiome also showed a circadian rhythm. They found about 10% of the species varied over the course of 24 hours; species involved in breaking down proteins were high during the daytime, while species involved in detoxification thrived at night.

Your circadian gene variants can also have an effect on the gut microbiome.

Another mouse study found that the deletion of BMAL1 (another core circadian gene) caused alterations in the gut microbiome. These changes seemed to be worse for females.[ref] Food choices also matter. When researchers subjected mice to shift work conditions (flipping their day/night lighting for a week at a time over a 12 week period), they found that the mice had significant alterations to their gut microbiome — but only if they were on a high-fat, high-sugar diet.[ref]

Let me conclude with a new study that may add another twist to this story of microbes influencing our gene expression and of our circadian gene expression influencing the microbes. In a study that came out last month in the journal Lasers in Medical Science. Researchers had applied low-level laser light (photobiomodulation) in red or infrared wavelengths to the abdomen of mice several times in a week. The researchers found that the infrared wavelength (808nm) significantly changed the abundance of one type of bacteria after two weeks.[ref] So circadian function of the human (host) genes can influence the bacteria in the gut… the gut microbes can produce metabolites that influence our circadian gene expression… and infrared light on the abdomen can actually influence the abundance of gut microbial species.

So I’ve covered a lot of studies that tie together with circadian gene function, gut microbes, etc…But what are the practical implications of all of this?  I’m honestly not sure that we can answer that question yet through scientific research, but – and this is important – knowing that all of these interconnects can help you experiment with your own gut microbiome and circadian connections.

A review of the gut microbiome connection to MS looked at all the different ways that we can influence the gut – probiotics, prebiotics, diet, fecal microbiome transfer, bile acids, and antibiotics.  Unfortunately, the journal article doesn’t come to any real conclusions other than that the gut microbiome is important in MS as well as other diseases.

Things that you may want to consider in regards to your own gut microbiome:

Gut Genes
Did you know that you have more bacteria in your gut than you have total cells in your body? You are their host, their environment…And your genes influence which bacteria can use you as a host!