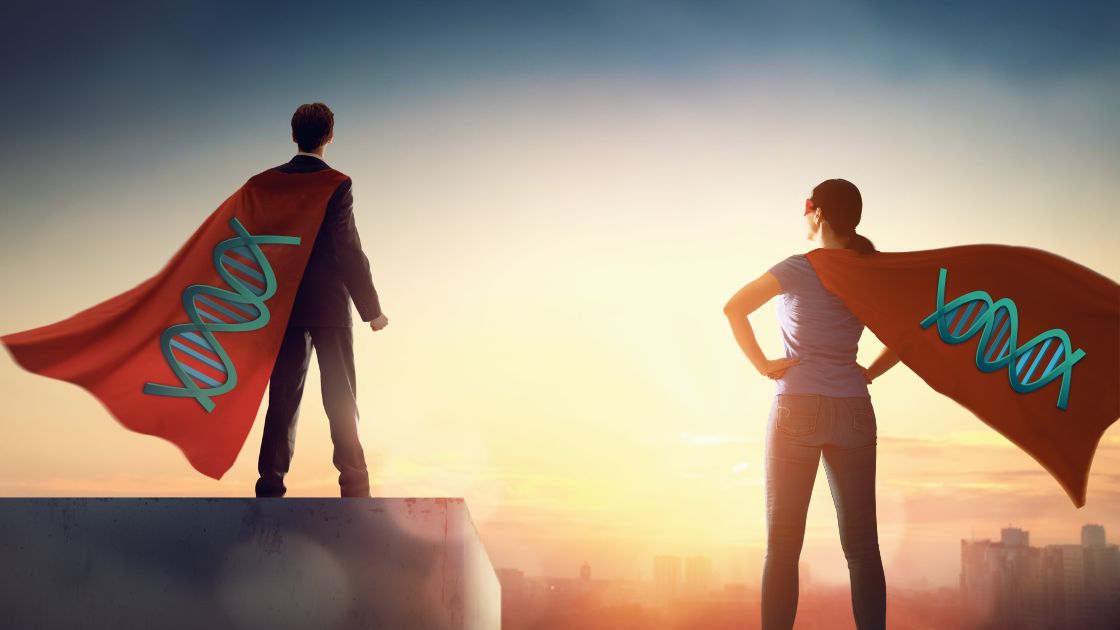 Do you have “good genes”? That question comes up a lot – and means something different to everyone. For some, the term “good genes” means they are tall, good-looking, and have good teeth. Others may prioritize intelligence or emotional IQ.

From a genetic point of view, most variants have positive and negative consequences. In our modern world, a variant that may have helped your ancestor survive the black plague may give rise to chronic inflammation.

This Genetic Superpowers Report looks at the positive side of genetic variants. Everyone has some kind of genetic superpower, and hopefully, this report will highlight yours! Members will see their genotype in the reports below. Consider joining today.

“I get knocked down, but I get up again…” may be your theme song if you have resiliency genetic variants.

For some, childhood traumas can permanently change how their bodies react to stress as adults. But others are much more resilient — able to bounce back more easily when experiencing adversity.

Cortisol is released in response to stress. It is a normal and necessary response if a tiger is chasing you. However, some people experience altered cortisol responses as adults due to epigenetic modifications brought on by childhood trauma. These changes alter how the brain controls the release of cortisol, and it alters the ability to recover from stressors.

For others, though, traumatic events at an early age have no lasting physiological effect. They are resilient and bounce back completely in stressful situations.

CRHR1 gene: This gene encodes a receptor for corticotropin-releasing hormone (CRH). In the brain, CRH is released from the hypothalamus and initiates the pathway that involves the release of cortisol and stress hormones. Traumatic events during childhood, whether psychological or physical, can permanently alter the CRH receptor for some people, while others will remain more resilient.

Read the full article on resilience to childhood trauma.

If you’ve ever wondered why you never seem to get the flu, this may be the genetic answer.

Our genome is shaped by the pathogens that our ancestors survived. It is really pretty cool – you carry specific genetic variants passed down to you from ancestors who lived through diseases and epidemics. (The ones that didn’t survive didn’t pass on their genes…)

Throughout history, humanity’s biggest threats to survival have been the microscopic pathogens that we now battle using antibiotics, antifungals, vaccines, clean water, etc. All of the genetic variants that gave your ancestors a survival advantage in ages past are still written in your genome today.

The flu comes around in different strains each year, and some people are champions at fighting off specific strains. The genes that encode different parts of the immune system have lots of different variants in them. It makes humans able to survive new and varied pathogens.

Researchers found that variants in IL17 (interleukin-17), IL28 (interleukin-28), and IL1B (interleukin-1 Beta) decreased the risk of getting the H3N2 flu strain.[ref] Keep in mind that even if you are at half the normal risk, you could still get the flu, especially if you have a compromised immune system.

Read the full article on susceptibility to viral infections.

For some people, even a bad diet doesn’t seem to affect their cholesterol much. Year after year, their blood tests show they are on the lower end of the cholesterol range. It turns out that genetics can play a significant role in whether you have low or high cholesterol.

The PCSK9 gene encodes an enzyme vital to how cholesterol is transported throughout the body. PCSK9 regulates cholesterol levels by controlling the number of LDL receptors on liver cells, which is where cholesterol is synthesized and eliminated.

Read the in-depth article on PCSK9.

HIV uses the CCR5 receptor to gain access to cells. In the mid-90s, geneticists investigated why some people who were exposed to HIV either didn’t get HIV at all or didn’t progress to AIDS. They found that a mutation in the CCR5 gene, called the Delta32 mutation, prevented HIV from binding to T cells and macrophages.[ref]

People with one copy of a genetic variant in the CCR5 receptor are much less likely to have an HIV infection progress to full-blown AIDS. Two copies of the variant significantly decrease the likelihood of even getting most strains of HIV.

Common sense note: The research on this CCR5 mutation is extensive, but there are constant viral changes to HIV with new strains emerging. Definitely do not rely on your genetic ‘superpower’ here to protect you from HIV/AIDS.

23andMe data is not guaranteed to be clinically accurate. You shouldn’t rely solely on it for any medical decisions.

Scientists have long been fascinated with figuring out why some people are likely to live to be 100 or more. It is a tantalizing thought – perhaps a genetic variant extends lifespan?

The FOXO3A gene was one of the first genes identified as being tied to living longer. The gene impacts both apoptosis, which is cell death, and cancer risk. Apoptosis is crucial because it is one way that the body gets rid of cells that are damaged, infected, or have DNA damage. And not getting cancer is an excellent way to live longer…

FOXO3A gene: The FOXO3A gene (forkhead box O3 or FOXO3) has links to longevity in many studies. This gene is thought to regulate apoptosis (cell death) and function as a tumor suppressor. It is also involved in nutrient sensing, regulating IGF1, and the response to oxidative stress (all important in longevity).[ref][ref]

Check your genetic data for rs479744 (AncestryDNA only):

Impervious to the stomach flu!

About 20% of us have a genetic superpower that protects us from a norovirus or rotavirus infection. These are the viruses that cause what is commonly called the ‘stomach flu’.

The FUT2 gene encodes the enzyme fucosyltransferase, which controls whether your blood type will express in your bodily fluids (other than your blood).

About 20% of people with European or African ancestry are non-secretors of their blood type. It changes the gut microbiome and also changes the way that viruses can interact and replicate in the intestines.

The norovirus and the rotavirus are much, much less likely to infect a non-secretor. Researchers estimate that they are about 99% protected from getting these infections![ref][ref]

FUT2 Gene: codes for fucosyltransferase enzyme, which controls whether you secrete your blood type or not

A change in the FOXC2 gene results in the development of double eyelashes called distichiasis.

The FOX (forkhead box) gene family produces transcription factor proteins, a subclass of protein. This kind of protein switches genes on and off both during cellular replication and throughout development.[ref][ref]

It turns out that each of us has a distinct sense of taste. Our taste buds include a wide variety of taste receptors, and changes to the genes encoding these receptors affect how we perceive flavors.

Key to survival, our taste buds are essential for knowing whether a food contains the nutrients we need or a poison we should avoid. We instinctively know that a ripe strawberry is delicious, but an over-ripe strawberry that contains mold or bacteria could be harmful.

People who taste certain flavors more strongly than usual are called supertasters. They are particularly sensitive to the bitter flavors found in broccoli, coffee, dark chocolate, or beer. Some people can taste certain bitter toxins that grow on plants, thus alerting the rest of their village or tribe not to eat them.

In our modern era, someone who can taste a wider range of flavors may become an excellent chef or perhaps a wine connoisseur.

TAS2R38 gene: codes for the receptor linked to the taste of bitterness in broccoli, Brussels sprouts, cabbage, watercress, chard, ethanol, and PROP.[ref][ref]

TAS2R16 gene: encodes the receptor associated with the taste of beta-glycorpyranoside[clinvar], which is in ethanol, bearberry, bacteria in spoilt or fermented foods, and willow bark (salicin).[ref]

Have you ever wanted to have more hours in the day? Some people naturally feel great after five to six hours of sleep due to a mutation in DEC2. Just think… this adds several hours to their day without any health drawbacks.

The DEC2 mutation is pretty rare, though, with only about 0.5% of the population having it.[ref] The rest of us need to get 7.5-8 hours of sleep on average each night.

Read the full article on DEC2 and short sleep mutations.

We all have genetic superpowers, whether yours shows up on this list or not!

It is easy to get sucked into the mindset that our genes are ‘bad’, but that just isn’t true. We all have variants that may be less suited for our modern world, and we all have other variants that are beneficial.

I find the research on how certain rare mutations survive in the human population fascinating. For example, cystic fibrosis mutation carriers are at a lower risk for tuberculosis and cholera. Researchers theorize that the mutation is relatively common in people from certain areas due to carriers of the mutation being more likely to have survived cholera epidemics in the past.[ref][ref]

I hope this brings you a new perspective on your genes!

Dyslexia – Genetic Connections
While dyslexia is known to run in families, the role of genetics in dyslexia is still being determined. Here is a quick look at some of the genes involved in dyslexia, affecting around 10% of the population.

ABCC11 gene: Ear wax and no body odor
The ABCC11 gene determines both the type of earwax a person has and their armpit odor. Learn more about how a change in a single spot in the DNA of this gene can cause the gene not to function.

Trimethylaminuria: Genetic variants that cause a malodorous body odor
Often referred to as ‘fish odor disease’, trimethylaminuria causes a strong odor in sweat, urine, and breath. This article explores the FMO3 gene, which encodes the enzyme that breaks down triethylamine.

Top 10 Genes to Check in Your Genetic Raw Data
Wondering what is important in your raw genetic data? Check out this list of 10 genes in your 23andMe or AncestryDNA data.