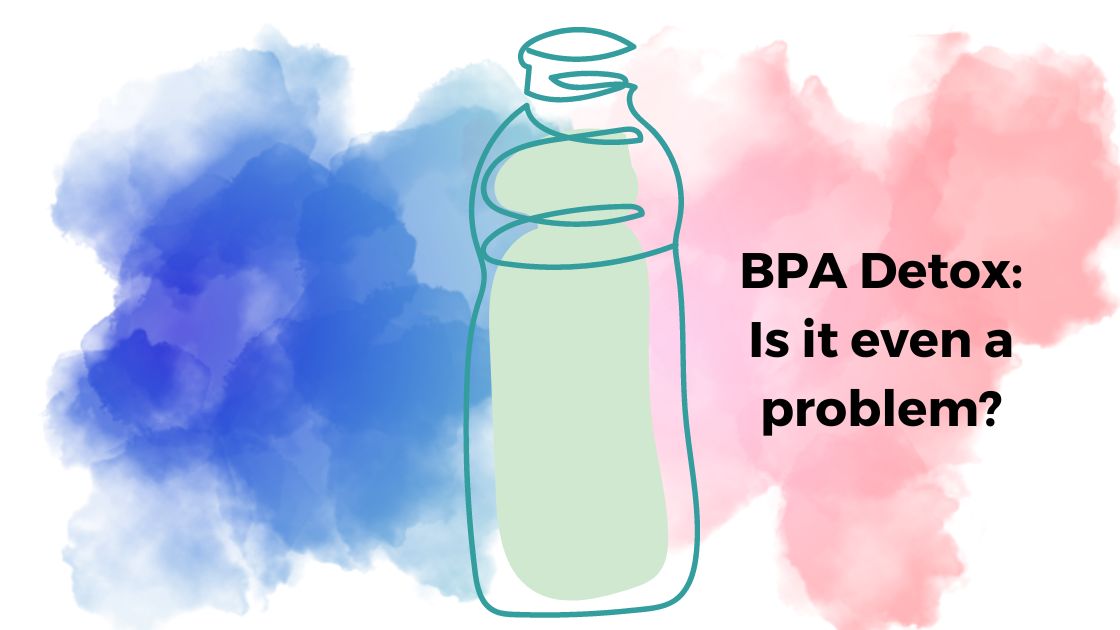 Key takeaways:
~ BPA is an endocrine disruptor similar to estrogen.
~ We are all exposed to it.
~ Individuals differ in how they break down and get rid of BPA.

BPA, a chemical found in some plastics, has been linked to a variety of effects on people, including obesity, insulin resistance, and epigenetic effects on babies.

BPA is everywhere in our food supply. In fact, a CDC report showed that 92% of people have BPA in their urine.[ref] This article explains the peer-reviewed research and the links to genetic variants involved in getting rid of BPA.

Two questions that I wanted answers to about BPA:

I’m diving into the research on the topic, looking past the hyped-up ‘sky is falling’ type of headlines to see if there really is a reason for concern.

What do studies show about BPA?

Ok, so BPA is everywhere and may act similarly to estrogen. But is this a problem? Maybe…

While animal studies are important and have their place, I’m going to focus here on recent human studies that take into account current human levels of exposure.

Changes to insulin:
A study published in the Journal of the Endocrine Society looked at the effect of BPA on insulin secretion and glucose levels. The researchers gave an oral dose of BPA at 50 ug/kg body weight, which is the daily limit set by the EPA as being safe daily exposure over a lifetime. They found that this BPA dose increased initial insulin release (oral glucose tolerance) but then showed no statistical difference with the later phase blood glucose response. This is an important study because they used the EPA guidelines for an amount of BPA that was not supposed to elicit a response.[ref] I found it interesting that there was a large variation between individuals in their BPA levels over time after ingestion — individual rates of BPA metabolism varied a lot!

Exposure starts before birth:
Another recent study looked at BPA and PFOAs in over 6,000 newborns to determine if there was an effect on birth size. Researchers found that over 90% of the infants had detectable levels of BPA in their blood, and over 99% had detectable PFOA and PFOS. The study did find that average BPA levels were higher in twins born with lower birth weight, possibly because higher BPA levels also correlated with a greater number being born before 37 weeks of age.[ref] Most remarkable to me is that 90% of babies were born with BPA in their blood. The infants in the study were born between 2008-2010 in NY.

Male fertility:
BPA was shown in a recent study (and several previous studies) to reduce sperm motility in men.[ref]

Inflammation:
A study from August 2018 found that BPA at normal exposure levels alters insulin response in a way that is independent of adipogenesis (fat creation).  The study found that BPA causes a low-level inflammatory response.[ref] This is in line with previous epidemiological studies that tie higher BPA levels to insulin resistance in men, women, and children.[ref][ref][ref]

Not everyone is affected by BPA in the same way. Genetic variants impact how quickly you clear it out of your body.

COX2 gene:
COX2 is an enzyme that acts as part of the body’s inflammatory response

CAT gene:
Catalase is an enzyme involved in cellular detoxification

SOD2 gene:
The SOD2 gene codes for a mitochondrial enzyme that converts superoxide into hydrogen peroxide and oxygen. It is important in detoxification.

The study results here showed that the more common variant of rs4880 (A/A) was associated with an increased risk of liver dysfunction. This seems contradictory, but a new cell study on vitamin D levels, SOD, and BPA help to clear up the confusion. The study showed that “BPA administration elevated Mn-superoxide dismutase (MnSOD) expression but negatively regulated total SOD activity”. The researchers go on to explain: “Our results suggest that 1,25D3 attenuates BPA-induced decreases in 17β-estradiol and that treatment with 1,25D3 plus BPA regulates granulosa cell mitochondria by elevating mitochondrial biogenesis-related protein levels.”[ref]

UGT2B15 metabolizes BPA (through glucuronidation)[ref]; “the polymorphic alleles of UGT2B15 are closely associated with variations in the metabolism and toxicity of BPA.”[ref] A study looked at the expression of UGT2B15 during the third trimester and in infants (3 – 15 weeks). UGT2B15 levels varied (by 31 fold) among the group due in part to gender and UGT2B15 polymorphisms.[ref] Another study found that UGT2B15 metabolizes up to 80% of BPA when concentrations are low but that another enzyme (UGT1A9) becomes more important at higher BPA levels.[ref]

UGT1A: Glucuronidation of BPA through UGT1A[ref]

The BPA that isn’t metabolized through glucuronidation usually gets taken care of through SULT1A1. Mouse studies show that obese livers are less able to sulfate BPA than lean mice. “Taken together these findings establish a profoundly reduced capacity of BPA elimination via sulfonation in obese or diabetic individuals and in those with fatty or cirrhotic livers versus individuals with healthy livers.”[ref][ref]

Lifehacks for getting rid of BPA:

Stopping exposure:
This seems like a logical first step, but it can be more difficult than you may first think. Take a look at this list of common exposure routes to BPA and figure out where it makes sense to focus your attention.

Realistically, it isn’t possible to cut out all exposure. Instead, choose the areas where you will get the most impact.

Common sources of BPA, and BPS exposure, include:

Dust your house:
One route of exposure that is especially important in children is through contact with dust. One estimate showed that it contributed to about 10% of BPA exposure.[ref] A good reason to get out a dust rag and take care of all those dust bunnies…

FUT2: Are you a non-secretor of your blood type?
People with a variant in the FUT2 gene do not secrete their blood type. This affects the gut microbiome – and makes you immune to the norovirus.

BChE: Nightshade sensitivity, Anesthesia risk, and more
The BCHE gene codes for the butyrylcholinesterase enzyme. The BChE enzyme circulates in the plasma of the blood. It is a cholinesterase which breaks apart choline esters, such as acetylcholine.